This was a post that was NOT supposed to happen yet...

Life and the Grim reaper however had other ideas!

It's late - I'm halfway through a bottle of gin (Dry January ended for me spectacularly  a couple of hours ago) and Andy is in the land of nod... not out of uncaring ness... just necessity - he can sleep... I can't.

Rewind a couple of days (and forget the post I was gonna do to bring anyone reading this up to date)...  Saturday night I got a call from Cliff (that's my dad - my brother and I have always referred to our parents using their names.. right since primary school when I got a bollocking by the headmistress for calling mum Joyce) to say that Joyce (mum) had been taken by ambulance into hospital....  long story short, he's been looking after her for years and covering up how poorly she'd become.... a combination of dementia, arthritic decline, bad new knees and various other things...

Great we thought - (illness a side) - it would give him a break since his major surgery and recovery and it would be an opportunity for her to be PROPERLY assessed - in the hope that perhaps help would be provided ... in spite of Cliff's reluctance to accept it....

I've spoken with my dad more in the last couple of days than the last 30 years.... - and despite the circumstances, it's felt good.

Today however - when I phoned about 7.30 for an update on mum - I got the answer phone... on which I left a message asking for an update and call back later...

Not much after, I received a call from my cousin Rachael.    Rachael was looked after by mum in her early years as my aunt worked and mum didn't... ergo, Rache is my "little sister" .... As yet, I don't know the ins and outs but from what I can gather - mum took a turn for the worse in hospital after dad had left to go home... he was called back and she died.  Some how, my dad got in touch with his sitster -  My heroic Aunt Ali,  who then got in touch with Rache /Ken my brother and as Ken was heading to the hospital , Rache offered to call me.

It all feels a bit ... surreal.  The long and short of it is, that mum has  died, dad is alone after 51 years, I'm stuck in Skipton without a car (gonna hire one tomorrow) and I have NO idea what to do or how to feel....  actually that's not true - the feeling bit is easy - I feel totally awful ... none of this" Numb" shite folk mention... I'm raw to the point I can barely see the screen.

I'm writing this because I don't want to burden anyone who loves me - and I'm SO, SO lucky to have people who do....    Nothing they can say or do will take away whatever this feeling is - so I will try my hardest not to trouble them....  Andy is sleeping - he's out of his depth too.... but his heart is willing and just knowing he would try his best is succor.

I phoned my mums only (to my memory ) living relative - her brother ....and broke the news to him earlier....   there may be distant cousin's somewhere but that will have to wait until later.

My brian is going bonkers and I'm hoping this gin will kick in soon - it's not showing much of  sign yet though.

anyway - here is the last photo I took of my parents together when we celebrated their 50th wedding anniversary.... there's lots more to say - my brain really is going nuts, but  this is a boating blog ... and although life/death IS part of boating life - perhaps I should wander off and look  at charging regimes or something less painful. 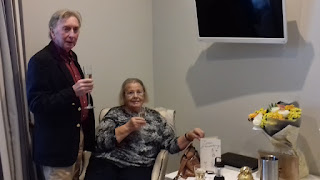 Sorry to hear this. Hope you are all ok and that you can rally around Cliff in this difficult time.

So sorry Mark to hear of the sad loss of your mum. We send our sincere condolences and will be thinking about you today.
Carol and George

There is little that anyone can say, however gifted - and I am not - that will make this moment any less raw. In a way, that rawness is proof of the real relationship that you experienced with mum/Joyce. In time you - with Andy's help - will evolve into a different place. Your memory of her will not go away and such a great photo will help. Now is not the time for forgetting, or even letting go, but for cherishing what you had for over half a decade, one that happily developed you and accepted you for who you are. But also remember that the previous generation had to go through the same process and see how they survived. Best wished from nb Alchemy (currently at home in Cornwall).

So sorry to hear your news. Our thoughts are with you.
Pip and Mick

Sorry to read this, never think it's just a boating blog, by writing about what hurts can help others in so many ways you cannot begin to imagine. Take care. Caroline

Sad news sending my condolences to you and your family Mark.
Time is the great healer I do know that.
Best wishes
Ade

We are also sorry to read your sad news. Our condolences to you and the family. Jennie and Chris.