Here we are then... in a state of limbo - where time has stood still and things are out of my control.

It's not a feeling I'm comfortable with or even vaguely familiar... and to say it's unsettling, is an understatement.

Since my last visit here, it's been a very frustrating and lonely time on the boat....We traveled from Skipton to Bingley (in the rain - which was handy as on occasion it hid my tears somewhat) and then had to sit and wait for our (amended) booking to go down.  I understand the need for crt to organise their work force out of season but it didn't stop the feelings of frustration and despair.

The sun at least did come out whilst we hung around the tip of Bingley so the solar panels could do a bit to earn their keep - it's been a whilst since we've had any decent light for them...so to be putting in 10 amps made  a change from their pathetic output of late. 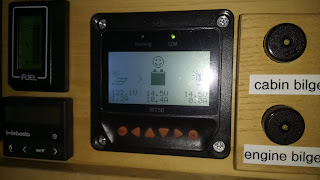 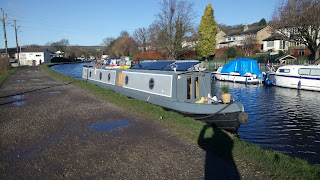 Whilst we were there, Andy set to and made some proper side fenders - using the NEW rope we'd bought in Skipton when we filled up with Diesel and Coal on  Monday morning at Pennine Cruisers.

Whilst he was doing that, I was trying to arrange car hire and a hotel near (ish) to my parents home so as to make the journey up there shorter next week.    Car hire in Skipton had been easier using a smaller firm but with less additional cossets.... Hiring from Europcar in Wakefield turned into a whole lot more expensive operation....  it costing the same for a week as it does for 3 days!!! - well that's the "hook line" anyway... by the time you added an additional driver (90 quid more please)... damage waiver to reduce the excess from 1400 quid down to something sensible and include windscreen/tyre cover (another 70 quid) it ended up at 355 quid.... and that didn't even include breakdown cover!!!

I suspect, had my brain of been working properly , I'd have been able to find something better/cheaper but it was all I could do to book the bloody thing as was - I still need to get the printer working to provide "printed proof of address" ffs.

The place in Skipton was happy with out NI numbers and looking at our online banking on our phones.

Hmmmf,   anyway - it's done now so we just need to get back to Wakefield and then all the ducks are lined up.   We had thought about hanging around when we get to Leeds and using that as a base but to be frank, Wakefield "FEELS" like home... given how pathetic I'm being at the moment, I want to be somewhere that feels comforting... somewhere I can walk around and bump into people who know me. It's also handy for picking up things from the house - along with coal,diesel etc. too.

It did occur to me to stay with dad the night before -  SORRY - rewind.  He sorted out the funeral on his own... not wanting to burden either me, his siblings or my brother... BUT I think it might be too emotionally draining for him having us around... preferring to grieve in private if given the chance.

We're chatting for about an hour a day though - something which is totally alien to both of us but mum would be so pleased.... even my brother and I are communicating like adults - another thing she'd want AND which was requested in her letter from beyond the grave.

Cliff is doing his best not to break down during conversations - as am I but quite often there are silences on both sides whilst we try and compose ourselves as a result of a shared memory or oppositely, unknown story to the other party.  It's weird but good.  I never realized what a sensitive man he is... something else mum would be pleased to know was happening...

Oddly, even though I firmly don't believe in "a better place", heaven or whatever else you want to call it, BECAUSE she did, I'm hedging my bets a bit and having random conversations with her ...  bonkers really but it's harmless and just in case she WAS right,  it would give her comfort.

He's not getting much peace though because being part of a large, well known family, (not to mention the death notice going in the paper) - folk are telephoning him all day... WHICH whilst difficult for him, HAS to be good for him to know he's cared about by so many.

ANYWAY - yesterday morning, the lockie arrived at the top of Bingley and although we were booking in for 1pm, offered to work us down an hour or so earlier ...  so off we went - an American family were hanging around the locks so Andy roped them into helping with his side of things... I wasn't really in a chatty mood so being on the back of the boat on my own suited me. 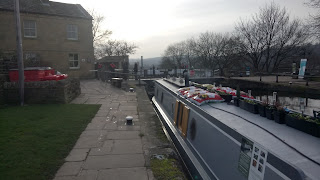 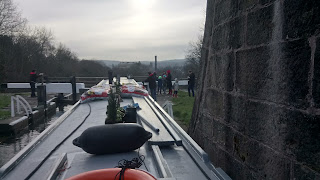 It made their day and was a brief distraction for us.

Whilst chatting with the lockie, he mentioned there was a booking down Newley locks on Saturday morning - we were booked in for Sunday.... SO, we decided to phone the CRT office and check we could piggy back onto it and share the locks...  that was agreed as it too was a 57 foot narrowboat.

THAT meant a bit o a schlep to Rodley - well not normally but because it's dark so early it meant by the time we'd worked out way through Dobsons Stair case and the swing bridges in Apperley Bridge, we arrived in darkness.

Not ideal but it did mean only a 45 min hop to the top of the Locks this morning to be there by 9am. 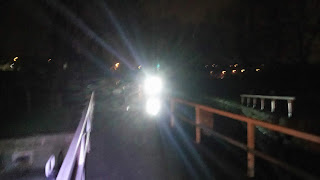 On arrival this morning, we spotted the boat we towed down into Leeds on our previous jaunt up here...  NOW resplendent with their BRAND NEW ENGINE.  They came over whilst we were in the lock and it was lovely to have a quick catch up ... hopefully next time we see them we can share a beer or whatever.

IT did feel nice bumping into a couple of familiar faces - I've been feeling a bit lonely of late... MORE so since mum's death so seeing Martin and Jayne was most welcome.

We've continued our journey today and will over night in Leeds before an early start downstream tomorrow - subject to the river not having a paddy...  All being well, we'll be "home" tomorrow and draw breath.      I DO hope these uncontrollable fits of tears begin to lessen their frequency though ... they're exhausting - as is the inability to sleep.  I'm BACK On Dry January though after Monday night's (acceptable) lapse but boy the temptation /need is stronger than it's ever been.

btw - a heart felt thanks to those who've said nice things... I know it's crappy and no one knows WHAT to say... but I suppose this "right of passage" so to speak has happened to (or WILL happen to) everyone else too.  Thank you x

Don't worry about the tears Neil - they will stop eventually, so just go with it.

To much more mundane matters - car hire. It does sound as though you were charged a lot by Europcar. If you are likely to need to hire more than once a year you might find taking out a policy to cover you fully comprehensive for annual car hire works out cheaper. My husband thinks his annual premium with Crestor is around £30. The car hire company will always want to see the policy which is understandable. We always use Enterprise as they come to collect you from the boat and take you back at the end. I am surprised they do not take the address on your driving licence as proof enough of your address.

It does sound as though good things are coming out of your mother's death - the closeness between you and your Dad and your brother would please any mother. Just remember in all this to take care of yourself. It is a long haul, but you will get there one day at a time. Jennie

I know this is of no help to you right now with regards to car hire but might help in the future. We always use Enterprise when we need a car. As long as you pay the £200 deposit with a credit card they don't give two hoots that you live on a boat and don't have proof of address. The address on your driving licence is all they need. Admitedly they do charge £10 per day for an extra driver but we rarely take up that option.
Also they will come and pick you up from wherever you are and take you to the office and at the end of the hire drop you off again. Also sometimes a small van is cheaper than a small car.
I have a separate insurance policy that covers all the excess that Enterprise (or any hire company) want to charge £15-20 per day for and the tyres and windscreen etc. Cost about £40 per year. I think it was from insurance4carhire.com or something like that.

I remember the perculiar feeling of being in some kind of limbo before the funerals of each of my parents. Everyone else that you see on the streets, in their cars, on the bus, walking on the towpath etc. is getting on with their own normal lives and here you are in this strange place that seems to be nothing like normal at all. The funerals really helped me get through the difficult time and move on.

All the best and remember that the boating blogging world is thinking of you all.