Finally I've had a few hours spare (well not really spare but you know what I mean) this weekend to  “think” about the boat again.

I've been looking down my list, and I came to Anchors! – not the most exciting subject but given we’ll be on a river quite a bit, something that’s very important…  well something very important in an emergency.  Given my tendency to prepare (and no I wasn't a boy scout)  my research tells me that an anchor needs to be big enough to be deployed by anyone on board.

Initially, I’d thought about getting a 20kg Danforth type – 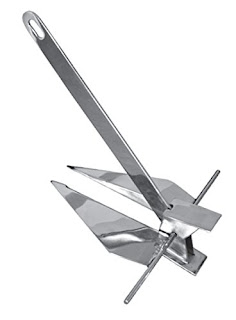 NOT this of course as it’s stainless steel and costs about 600 quid.

Trouble with  something this heavy is, that what say either of our mothers were needed to deploy it in an emergency situation – WOULD they be able to lift 20kg of anchor and chain over the front of the boat? – I doubt it…  it’s a tough one… they could probably manage 10 – maybe 15kg  at a push but would that “do” enough to stop the boat going over a weir ? … I don’t know…

I’d hope to have enough notice of the need to deploy one to be able to get to the front of the boat myself to chuck it in but you never know.

Usually when I can’t decide what to do – I do nothing… on this one I can’t  so having had a few cups of tea this morning and time to think,  I've gone with my original plan and ordered the 20kg one 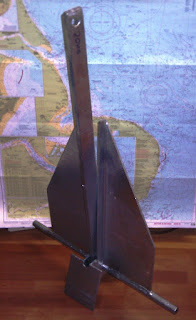 This galvanised one was only £75 – by the time you add in the cost of the chain and rope it doubles the price but once again… something that NEEDS to be done.

Next week when we go see the builder, I’ll make sure he makes a note to make a proper fixing point on the front – some folk just use the front t-stud but I’d rather make sure I can fix it to a proper place as t-stud welds have been known to fail when the anchor brings the boat to a halt.

Ours will be permanently attached to said point...Hopefully we’ll never have cause to use it and simply frequently bruise our legs on it!