A few easy wins this week...

Well I say easy, in "ginger land" it's usually 3rd time lucky... my skill set is no where near as high as my enthusiasm for having a go :-)

I've tried NOT to go to the boat every night after work - mainly because I know that when I've spent a day working in the cold at the unit, it's very hard to go to an even colder and dark place and achieve much.

All that should change this coming week as I've managed to tie down the webasto man to installing the thermo top on Thursday... for someone getting paid a large amount for what will be 1 days work, I don't understand why it's so difficult to get a definitive arrangement.  No matter,  hopefully by the time I get home from work on Thursday, we'll have an operational heating system and evenings working on the boat will be fun.

SO - What HAVE I achieved this week?

Well, the radio in the back cabin is now properly wired in (although it was a bit wonky so I've fitted a bit of chrome around it to hide the bodged cut  finish it off nicely.   I've connected the 12v socket and fitted the back cabin led TV... and amazingly it works 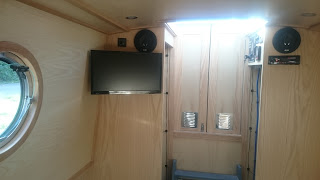 I've also tidied up the wires that were hanging out of the bedroom ceiling - given how they were left in the top corner (with no room behind for a rebated socket) I've had to fit a surface mounted patress box and then modify a chrome light switch to accommodate the combined tv, satellite and power socket. 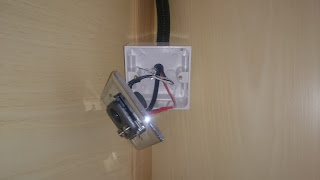 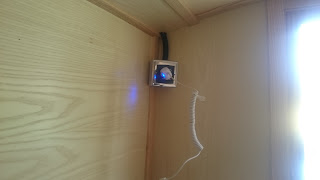 It worked out ok in the end.  I'll get the bedroom telly on the wall this week too.

Also this week (I suppose that should be last week really), I dug out my pocket jig and used it to fix a shelf above the calorifier and frame for the 2nd toilet door... 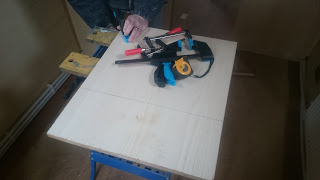 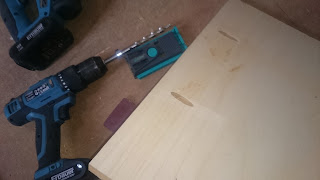 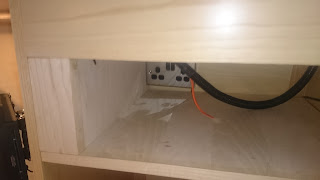 If you've never used one, you can watch how here...  it's not me but you'll get the gist of it.


A very simple but effective bit of kit - circa 30 quid off Amazon I think it was.

I've also cut and hung the door on the 2nd toilet - using double cranked hinges ... to be honest, it's not the best job I've ever done...  lets just say rather than measuring twice and cutting once - I er, kind of did it the other way around... the result being that the door is the right size but the support panel is 1cm too thin... the resultant outcome being a compromise - it looks ok but would not win any awards lol 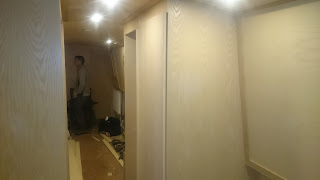 Today's plan is to make a door for the wardrobe opposite - it'll need to be flush fitting though given the width of the walk way and the fact the plan is for the toilet door to open into the walkway (to block off the route to the kitchen) and then the wardrobe door to open the other way (into the dinette) to effectively make a cubical across the boat to use the loo in.  I doubt it will get used much, but when guests are on board or WHEN the macerator is broken, we'll be pleased we went to the effort.