Keep back folks - I'm sure it's highly contagious.

We've had a miserable week...  well I say we - Andy started with it last Monday and by the weekend was at deaths door ... I kid you not - 3.30am Saturday morning he was having a bit of a panic attack at not being able to breath.  A few puffs on my ventalin later (and a firm CALM DOWN talking to) he was settled again.

Our plan HAD been to  to "camp out" on the boat on Saturday night... now that the heating is up and running it's a pleasant place to be again.  Alas, by the time we got home from a visit to his parents, he was WAY too under the weather.

As the week has gone on, I've gradually gotten worse and as it stands, we're both currently swigging benylin from the bottle and surrounded by piles of tissues... the result being that a side from cutting a few panels at work ( its easier on the band saw with a bit of working space), begger all has been done.  I've cut 3 wardrobe doors and surrounds to size and prepared the panels to hold the hinges but that's about it.

I've still  been calling in at the boat on the way home from work - mainly to turn OFF the heating that I seem to have got stuck on some kind of timed mode ...  so I've had cup of tea and charged the batteries a little whilst there so not a total waste of time.

IF I make it through to the weekend, we're going to have a bit of a clean up, take up the new memory foam mattress we bought with a view to chopping it up to make the dinette seat cushions and maybe crash there on Saturday with a couple of beers.

With a bit of luck, I'll also get to grips with the dinette and take some more photos...here's a couple for starters where I got up to before illness took hold: 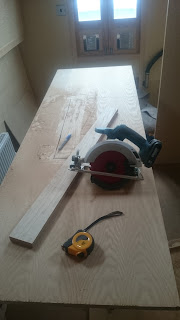 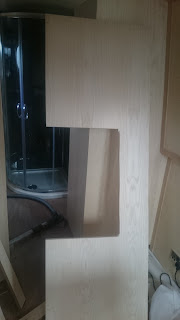 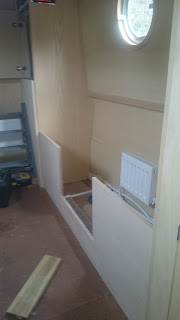