Drilling Holes in our new roof...Eeek!

Now I know to a lot of folk, drilling and tapping a hole is no big deal...  in fact, to me usually that's the case too.

WHEN it's through the roof of your new boat however, it just seemed "wrong".

A necessary evil of course in order to fit the solar panel mounts that kind chap sent me - for which I've STILL not paid... despite chasing him up twice now! 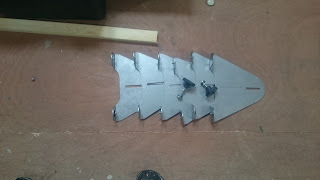 Having gathered together my bits and bobs, I fitted the brackets to a panel and dragged one on the roof to mark out their final locations.

You may remember all the fuss about the location of the bathroom mushroom vent which ended up in the way and HAD been changed to a flat "space ship" type... well, in the end, due to the last minute rush to meet the shared lift deadline, we did end up with a normal mushroom.  LUCKILY though, the solar panel bracket has enough height in it to allow the panel to sit over the vent comfortably.

I planned on using 6mm stainless steel bolts to hold them down and used a slight larger drill bit than I'd  usually use, so as to be able to get a decent amount of Sikaflex http://www.screwfix.com/p/sika-sikaflex-ebt-all-weather-sealant-black-300ml/79299?kpid=79299&cm_mmc=Google-_-Product%20Listing%20Ads-_-Sales%20Tracking-_-sales%20tracking%20url&gclid=COP877i7k9ACFRAz0wodT5kP0g down through the threads. 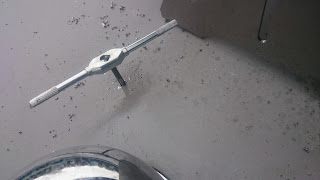 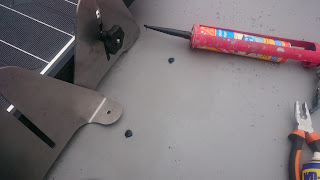 Given we really should have painted under the bracket properly once i'd got plenty in the hole, I then proceeded to put big dollops under the entire surface.  I don't think it will leak as once the stuff sets, it's pretty hard to penetrate.  I do wish I'd bought a better quality tap and dye set though as by the time I'd done all 12 holes, the m6 tap was about worn out.  In fact, the last one I did was a pretty poor fit and I may need to drill it out and use a larger bolt at some point in the future. 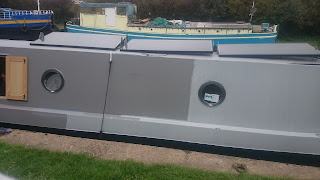 Having got the panels in place I needed to work out the best route for the wires into the cabin.  I know a lot of people use a mushroom vent but given we'd already had the internal wires run behind the panelling, going through the front bulkhead into the back of the wardrobe was the best choice.  I drilled 2 x 12mm holes through and whilst I'd initially planned on using some little rubber grommets to protect the cable, decided after consulting a few other folk, to wrap a good amount of self amalgamating tape around each wire to make a snug fit through the hole and leave an inch either side to allow for movement WITH the steel if you follow.  It's double insulated cable to start with so I should think it would withstand quite a lot of rubbing even without additional protection. 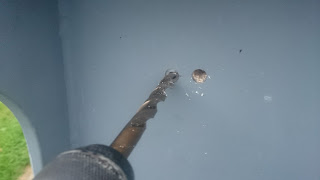 On the inside, I fitted a box to join the wires together and a pvc plate to over the holes. 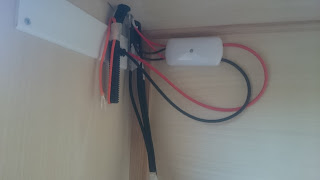 As you can see, there's going to be a lot going on in this corner as it's where the 3 tv cables, 2 satellite and 1 radio cable all terminate - my plan is to try to attach them all to 1 aerial (with a booster) and fit this to the front of the boat.  Time will tell if that works out!

What only takes a few mins to write down, took all day - partly because I'm the worlds most messy worker, leaving my tools laying around the boat and spending half my time asking Andy "have you seen such and such?"... I WILL have to learn to work in a more tidy and disciplined manner as it's beginning to frustrate even me!

Once the panels were safely terminated, I went to the front of the boat and began the connections to the battery bank.  I wasn't sure what size fuse to be using so once again asked advice from Thunderboaters, and a compromise was agreed - we ended up with a 70amp in-line fuse.  The theoretical max output of the mppt controller is 40amp and the cable I've used is 16mm2 (jump leads).

There isn't much space to squeeze a 5ft 10 ginger in the engine hole but trust me once in there, it was very handy to have my glamorous assistant passing me things I'd forgotten to take in with me. 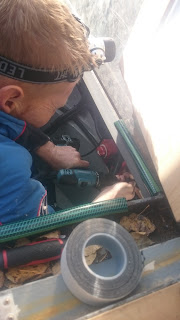 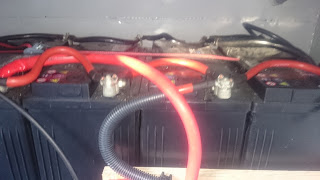 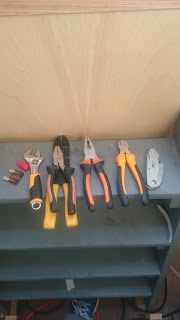 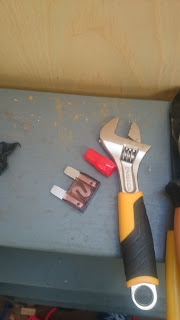 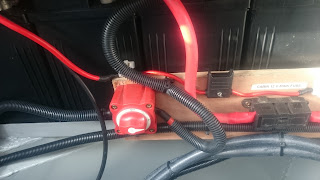 On the plus side, as it was very cold out, I was quite pleased to have had the engine running for a couple of hours earlier to make working in there more pleasant.

Having made the connections to the battery, I mounted the controller as close as possible to minimise the length of cable required - I think in the end, it's worked out about 3/4 of a metre which isn't too bad. 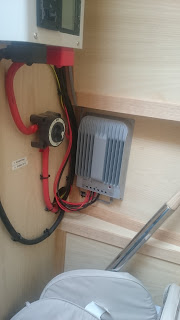 After the unit was on the wall I connected the battery FIRST - very important or you can break the controller!!! and then wired in the panels followed finally by inserting the fuse in the engine hole.  Next, I cut of a hole in the control panel and fitted the remote meter I bought at the same tie to monitor the mppt.  I'm pleased to report that even in late afternoon  winter sun, it was managing  a 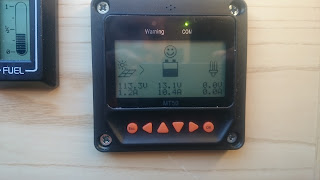 10.4amp charge rate.   It soon dropped though as the batteries were quite close to full.

I know given the time of year,  we won't get a tremendous amount from them, but given we'll not be living on board yet, they SHOULD keep the batteries in good condition and reduce the amount of time we'll have to run the engine..,

In other news, I spoke with Simon (the Webasto man) the other day and whilst he confirmed our kit has arrived, he's a bit tied up and unable to come fit it for a few weeks. That's a bit of a shame but we'll manage by using a combination of a camping gas stove and (with the engine running) the little halogen heater to take the chill off the coldest part of the days.  After today, we're both back at work full time anyway so it will only really be weekends and the odd couple of hours after work for me in the dark.