I THOUGHT that once the boat was under our jurisdiction, I'd be able to sleep... well it turns out that is not the case.  Oh well.  At least I'm not wasting my time in the middle of the night... no - not me.  I've been researching funeral costs (triggered by a program I've just watched on the telly) and have also been watching a program about Britain's Bridges... it was very good!

SO - Yesterday we continued fitting and piping the radiators to the boat.  You'll recall weeks ago both the rads AND the hep2o piping arrived in the post.  The " so - called" lay flat (on a roll???) piping is anything but !

Instead, it's a constant wrestling battle in a confined space.  IF you are doing the same, then I strongly suggest spending a little more and buying it in lengths of 2-3 metres... it will be much easier... I also advise on buying a better quality plastic pipe cutter than the rothenburger plastic pipe slices I'd bought off ebay...  whilst NOT totally budget, they took a bit of effort to produce a clean cut - some needed tidying up with a stanley knife.

It was very cold (sharp frost) so before we began, we started the engine, put the inverter on and turned on a little 800 watt halogen heater that usually heats the greenhouse. 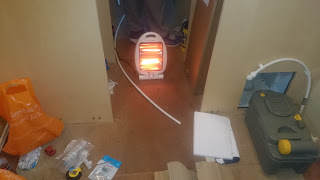 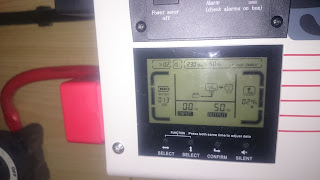 The inverter showed a 24% loading which is about right and whilst you could hear the engine tone change as the alternator takes more power, the charge rate only altered from 14.6 to 14.3 v which I think is ok - I'd not be using the heater for hours on end without the engine running obviously.

Having done the last radiator in the run first, we continued round the boat, starting in the rear dinette with the little wall rad and fin rads which will be under the bed/floor. 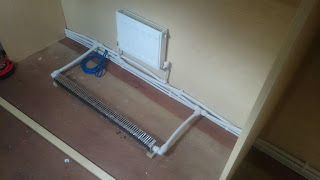 I'm not entirely sure the fin rad under the floor will be worth the effort but it's done and if it does turn out to be a wast of time I'll flog them on ebay to some other idiot  pioneer.

The next one in the port side run was under the hatch in the lounge - that meant enlarging the holes in the bulkheads with my multi-tool... sods law meant that where I needed to cut, the joiner had "joined" them with galvanised screws which blunted my blades. 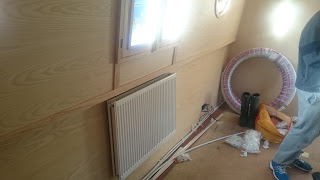 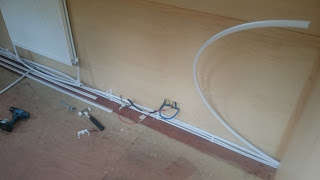 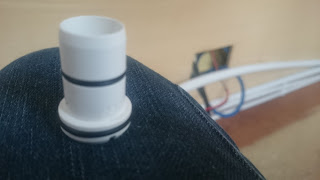 I've been using the 2 double sealed pipe inserts  -  they seem a good idea  but be warned, they are quite a tight fit and at times I was pleased to be able to use the nylon glazing hammer I'd bought when I fitted the windows.

From the lounge I had to drill more holes to get behind the shower and into the bathroom - where we fitted the smallest heated towel rail ... NOT to heat the room (there is another radiator on the other side) but to dry towels on. 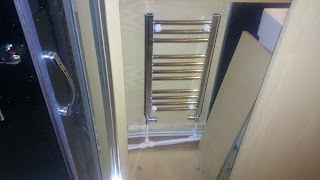 Moving through into the bedroom, it was very tight to get the radiator low enough to be able to fit UNDER the bed and keep free the batten behind the lining to attach the bed support to. 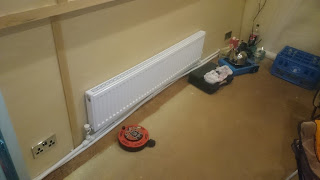 Getting the pipes to bend around and through the front bulkhead and near the water tank was a pig.  We've ended up with 2 joins in the centre of the boat - luckily hidden behind the panel but it was very difficult to get a tight curve through the holes I cut.   It's done anyway so next to connect were the bathroom (proper) and 2nd lounge radiator. 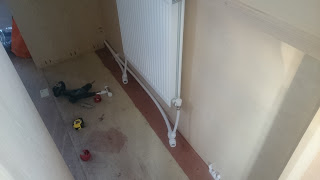 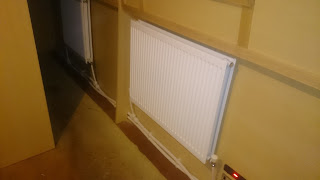 By now we were working in the dark again but did want to finish before calling it a day...that WOULD have happened more easily, had I not run out of "bits"... 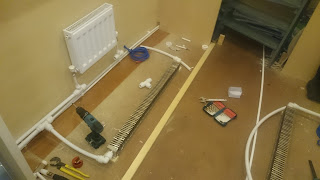 by "bits" I mean pipe inserts...  I was SURE I'd bought enough but hadn't... SO a trip to screwfix was in order to complete the job. 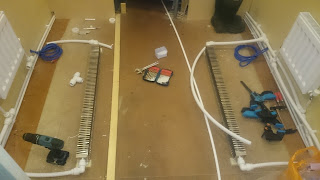 The final thing to pipe in was the calorifier - another bit of a pig, working in a tight space. I've treated it as a radiator and once that was done, passed the pipes through the bulkhead into the engine space.  It's going to be tricky to get a panel on the cupboard but that was already going to be a problem judging by the angle the boat builder had fitted it on anyway. 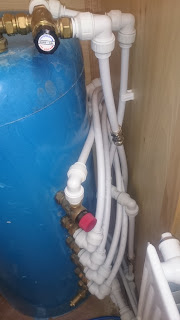 So they're all done.  I've NO idea if they are water tight or not... I suppose we'll find out the hard way once we get the Webasto plumbed in,