After my recent clumsy dispraxic event, I took the broken off bleed screw into work and ferreted for one the same size - it did turn out to be an m6 so I took a grinder to one, made a little groove and then shortened it to be the same size as the broken one.  I even put a little cork washer on it to make it look like a proper job - in fact, I'm NOT going to replace the part now as by fitting it, priming the system and then bleeding it, all is well again.

You may remember the other night I also pressure tested the heating system... it kept 3 bar in for a couple of hours without problem but I also left it over-night for good measure as Thursday was the planned installation date for the Thermo Top C.

I will try not to be overly critical here and whilst it IS now up and running, it was not all plain sailing.  The chap was an hour late to start with - ok so traffic CAN be a pain sometimes but a phone call at the due time would have been nice.  On arrival, it was announced we'd need to be on shore power in order for them to "weld" the bracket to the side of the hull - which of course we're not.  He already knew this from our previous conversation... SO, instead, a piece of board was scavenged from my pile of cockups offcuts and the remaining sikaflex employed to stick this to the hull in the engine hole.

In the process, another board originally installed by the builder using silicone was knocked off and is still hanging waiting for me to stick it back on.

ALSO a bit crappy, is the temporary method of holding up the pipes as can be seen here: 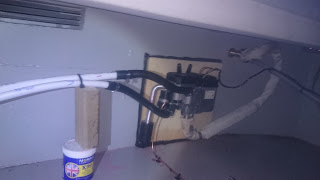 to be fair though, it might have been replaced with something more secure  as I took that photo during a coffee break...I'll have a look tomorrow night and report back.

At least the header tank doesn't look TOO bad: 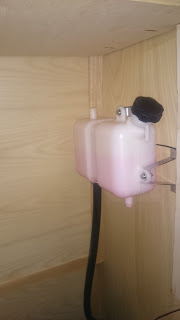 although that pointless down spout thing is nothing but a pain when filling it... it leaks out through if you forget to put your finger over it.


When it came time to fill the system up, it also transpired they'd forgotten to bring any anti-freeze which necessitated a trip into town for me.  I was sent to buy 20 litres of either blue or pink stuff (glycol or Oat) - Halfords only had the blue stuff in 2 litre bottles at 11.99 each so I opted for the pink instead. 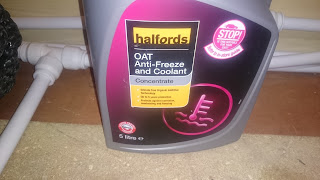 Of course that WAS more expensive but at least it should last a couple of years longer than the other stuff does.  We'll see.

The GOOD news is that for all the joints, not a single one of them leaked - even though I'd tested it, I was half expecting there to be pink stains all over but not a drop.  RESULT!

When the time came to switch it on, it seemed to take an age for any sign of warmth to appear - it'd become air-locked in spite of all the attempts to bleed the radiators as we filled it up.  Itwas a bit of a faff only having the shower hose and 2x2 litre plastic coke bottles to run back and forth with before the header-tank ran empty.

Eventually, the chap resorted to taking the pipes off in the engine hole which both scalded his arm AND fettled it.  Once bled, it was a major relief when ALL the radiators and the fin rads got hot.   I won't lie - I  nearly stuck to my original plan 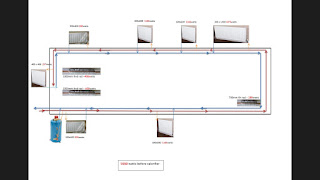 but swapped the position of the bathroom MAIN radiator across to the starboard side and added a small silver towel rail in it's place near the basin.  This has taken the total output (before the calorifier) up to 6.4 kw - therefore due to the length AND amount of radiators, it does take an hour for it get hot.  We can live with that as the result is a lovely balanced heat throughout the boat.  It's been a real pleasure working up there today with the heating on - I've also been running the generator to power the inverter/charger through the shoreline socket - it transpired that the charger output can be varied between 9 and 90 amps - Alas, the little generator can only cope with 35 and that's on full pelt.  I opted to have it run at 18amp and set the generator to "snail" to keep the noise down a bit - it'll have been enough to get the batteries back to 100% and power the heating whilst it was running.

I've also made up a couple of coax leads and tested 2 of the tvs : 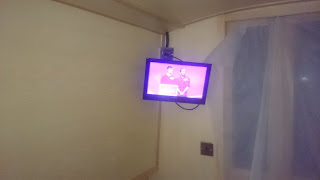 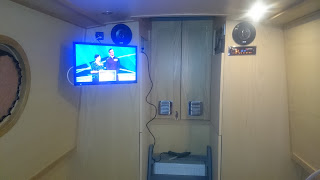 The top one DOES look a bit wonky but that's only because I've not tightened up the nut and on the adjustable bracket yet.

You can also see in the bottom photo that I've made doors and covers for the calorifier and electric cupboard.  The top half are on hinges and the bottom attached using ball catches.They need a few coats of varnish urgently given their location and vulnerability to the elements.