Carpal Tunnel round 2 and counting your blessings...

Yesterday was much more organised at the hospital than the previous visit - perhaps because I knew what to expect but an admission time of 4.00pm and post op discharge of 6.05pm really was quite good going - especially as I was 2nd in the list. 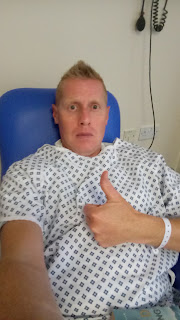 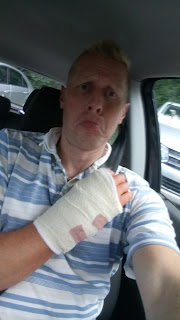 I really do need to get back to healthy eating  - since stopping working I've put on over a stone which is neither flattering or helpful to my wardrobe... I'm stuck in my "fat clothes" at the moment and given my delusional optimistic thinning out of clothing when we moved on to the boat proper, there are only a few things that fit... time to increase the daily walking me thinks!

Anyway - When I got into the shared room yesterday, I was soon joined by a chap called David, having the same procedure... HIS first time with his second hand to be done in  a few weeks.  This poor fella looked terrible - clearly exhausted and carrying the weight of the world on his shoulders.

We got chatting as you do and it was good to be able to reassure him about the recovery time first hand (no pun intended)... he was quite nervous but MORE concerned about how soon he'd be able to drive...  that was a bit odd given he was clearly retired but as our conversation progressed I reassured him that when I had my first one done, I felt safe to drive after a couple of days using my finger tips... it's your body tells you what it can (and more importantly can't) do.   It transpired that his concern was due to the fact his wife was in hospital - has been for 6 weeks and he needs to be able to drive to visit her...

He went on to explain she has terminal cancers pretty much all over ... including anus, kidneys, lungs and spine - in short, she's on her way out and he wants to be able to be with her when the end comes... preferably in a hospice which the palliative care team are currently trying to arrange for them.  The wife is a fighter and refuses to give in just yet he said, she is fully aware time is running out but she is putting a brave face on things - for his sake he thinks.  David openly said were he in her shoes, he'd end things himself...  our conversation then went on to euthanasia and how much BETTER it would have been for the country to have a referendum on legalising that rather then to leave the EU.

Without exception, every conversation I've ever had about the right to chose when to end our own lives has ended in agreement... I can't believe no potential government has had the bottle to put it in their manifesto.

Between us, we came up with an idea of recruiting help to finish our selves off should the need ever arise.  Macabre though it may appear, it's actually a sensible thing to do - acquire a suitable amount of something that would  send you to sleep forever but put it somewhere innocent looking so you could ask a friend/neighbour/relative to bring you WITHOUT them knowing anything was afoot - thus reducing the potential risk of them being prosecuted for assisting....

Now OK, so neither of us understand the law in this area but it is something worth bearing in mind if the need should ever arise.

BACK to the op - I won't lie...  this time it bloody hurts  is more painful than before.  Even though I took a reasonable amount of good painkillers before retiring, it was a rather bad night.  This morning, it's throbbing and I'm trying to keep it elevated... by tomorrow, it'll be much better I'm sure.

In comparison to poor David's wife I have absolutely NOTHING to complain about...  so I won't.  In fact, I think I'll put a jacket on and go outside and play ball (using my bad, good hand) with Daisy.. she's always pleased for someone to throw her tennis ball... on her terms I'll grant you - it's a battle of wills in regards HOW close to me she'll drop it - her preferring to have ME get up and meet her half way.

Hope you're feeling better soon. Don't put off what you can do today so make sure you get out for those walks! An interesting talk you had with David, I had a similar one with my dad who had terminal cancer. Caroline.

Hope your pain goes away soon and recovery is swift.
Kath (nb Herbie)

It never ceases to amaze me how much people have going on in their heads... -apart from the voices ;-), mine is usually empty!

Thanks Kath - it's hurting more than last time but is healing well enough.