If you're able to link that lot together smoothly, you're a better man than I!

Starting with the easy bit, ahem - you'll remember those seats I set to making for the bow AGES ago? - well they are finally now in situ and have a few coats of paint on them.  They're a little higher than most i'll grant you but I wanted to be able to store empty jerry cans underneath one side and folding chairs the other. 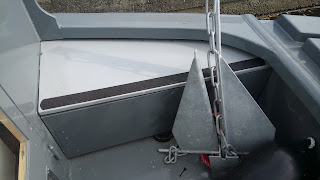 Rather than having the tops lift up, I've opted for sides that remove - held on with magnetic catches...  leaving a reasonably sized gap at the bottom to allow water to washer under and out.   Initially I'd left them smooth but the other day when I stepped into the well deck when filling up with water, I slipped off the edge and banged into the ruddy anchor ... hence the tape now applied.  It will get painted when I do the non-slip-rubberised grit on the roof sometime. 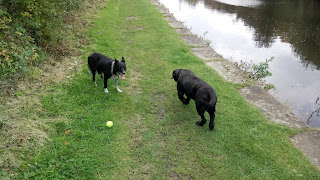 She's not like "normal"dogs when you walk her, sniffing and weeing etc. - instead she CONSTANTLY wants her ball throwing.  It's quite exhausting.  BRYN on the other hand happily lollops around doing normal doggy things.  I was pleased when we got to the clean (ish) water pond over the back to be able to stand still whilst Daisy jumped in and out of the water retrieving the ball to tire her out. 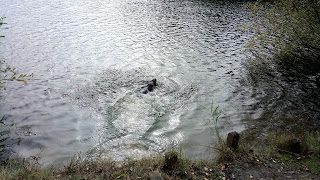 Why am I dog walking you ask? - well, the old chap behind had to go to his daughters for a DVLA eye test... in order to renew his licence.    We've both quite taken to him ... like a granddad I suppose - neither of us ever had granddads ... well rather we did but they died before we were around so have missed out on the support and kindness they bestow on their children's children.  It was the same atthe bungalow to a degree - being surrounded by oldies was always a pleasure ... Eric and Edna (rip) - both being that bit older than our own parents sort of adopted us and we were lucky enough to learn from their wisdom and life experiences... OK so we were never able to tap into "bank of Grandma & Granddad" but  never the less their kindness didn't go unappreciated.

It's the same with old Mick - he's a smashing old chap... his eyes are duff I'll grant you and it'll be difficult for him to come to terms with not being able to drive if they're deemed "too bad" but we'll all muck in and support him.  Andy and I have been trying to prepare him for the potential bad news in as kind a way as possible.... he's preferring to stick his head in the sand at the moment so time will tell how this pans out.

SO if you are lucky enough to HAVE Grandparents - take a while to stop and think how different your life would have been without them.  Take time to appreciate all they're done and continue to do for you... sometimes making up for your parents short-comings or taking YOUR side through bumpy times in your life.

Oh and as for WHY I've got Bryn as well,  it turned out Mick got muddled thinking HIS owner would be home (he takes him out with Daisy for a walk whilst his owner is working) and he wasn't.  Luckily, another key was conjured up so I could take him too for a couple of days.

The cats btw, stand their ground rather well against the dogs - especially Sox... she has NO FEAR.... although yesterday she did get into a fight with 2 junior swans... a fight she had the sense to retreat from back into the boat... where she promptly puked up a mouse she'd eaten earlier... lovely! 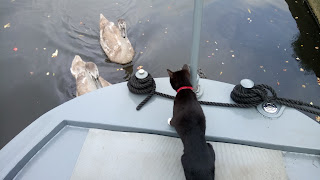