Tiny fires and a lynch pin....

Winter is on it's way...  I know this because for the 2nd morning in a row when I got up, the temperature outside was showing only 3.4 degrees c. - it might have been lower during the night as since I don't HAVE to be up at stupid-o-clock any more, my body clock has adjusted to sleeping in to about 7-7.30 now which is lovely. 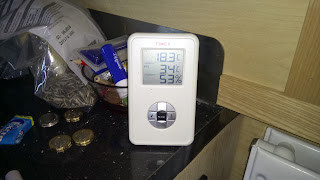 We HAD been setting the heating to come on for an hour or so to give us hot water and take the chill off the boat but it'll not be long before the fire is in 24/7... which we're both looking forward to.  We've gotten one of those plastic garden storage trunks and put it back in amongst the bushes to the side of the boat - initially, I'd put sacks of coal in it but when one "walked" (thieving scrotums) I decided having it in lose might be a better idea - the time it takes to fill a sack/bucket/pockets or whatever might deter whomever it was from taking any more... failing that, I'll rig up some kind of electrocuting alarm lol.

The trouble with having the heating on is that the batteries get a bit of a hammering when they are at their lowest - ie in the dark early morning, after a nights use and BEFORE the solar kicks in.  Given we're still running on 3 that's probably not the best idea.

SO, in a bid to keep them alive for as long as possible, I've been experimenting with 'tiny fires'... so as not to heat the boat to unbearable temperatures but just make it comfortable - especially now the rear is door is open more with the cats coming and going. That may look pathetic but you'd be amazed at how much more comfortable the boat is with so few coals burning all day - on a night I chuck on a couple more and rather than closing it up, just leave it on full vent - by morning the lounge is still warm and only a few embers remain .  It's taken a bit of getting used to but I think we've capped it now... roll on the snow and ice so we can get a proper fire going.

So - Lynch Pins...  I've had a devil of a job getting hold of any in Wakefield... it seems no one's ever heard of them...  we used them all the time at work doing the fairground stuff  - perhaps it's scary to think they are often all that's holding a swift (roof joist) in position on a waltzer or speedway but they do the job well.

The reason I wanted a couple was for the cabin hooks on the rear hatch.  For the last few months, when closing the boat up from the inside for the night I've bolted the middle of the sliding hatch and engaged a cabin hook on either side door to hold it down.... this appeared to work OK - that is until the winds the other night ....  turns out that if the hatch was rattled REALLY hard (by wind or Mr. intruder) the cabin hook could work lose and fall out of the retaining hole - thus allowing the hatch to be lifted and free access to the back cabin - NOT something you'd want to happen when you were asleep in bed.

I'd been racking my brains as to how best to solve this when it occurred to me to drill a hole into the back doors and bung a lynch pin in to prevent the cabin hook dropping back. 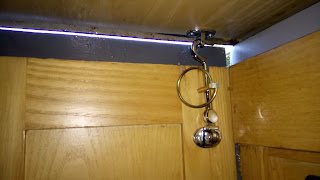 I didn't manage to actually find any in town but Gavin who I used to work with, brought me a couple from work as a favour -it'd have been nice if they'd matched but he couldn't find 2 the same, so for now, I'm just using the one but it does the trick.   I'll  attach a bit of chain to it and fix it to the door so it can't get lost.... when I get around to it.