Yesterday, the time finally came when the stern greaser... ran out of grease!

I'd been aware it wasn't far off being 'fully screwed down' for a few weeks but it looked like it would last forever...  Alas that was not the case.

Having read other peoples suggested ways of doing it without getting covered in grease (and deciding just to put a pair of gloves on and use a desert spoon), imagine my delight when I opened up the tub that'd been sitting in the engine bay  (you know the one ... the one the webasto fitter had used to support the pipes along with a bit of wood) to discover someone had designed it especially for purpose - i.e.. it had a plastic disk the full size of the tub with a hole in the centre which meant all I need do was push down the holder and it would fill it up - mess free. 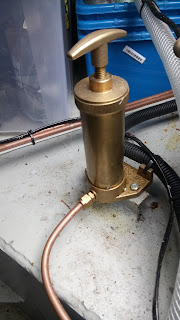 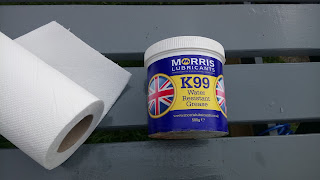 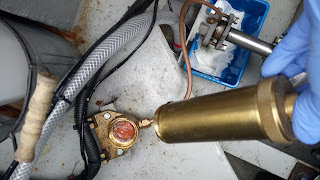 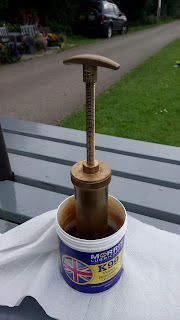 Even better, is the fact that there's still enough left for another fill... hopefully in about another 12 months.

The down side to having done this is that it's pricked my conscience in regards painting the engine hole ...  I sort of forgot all about it when doing the rest of the boat - unless I get a sudden surge of energy, it'll have to wait now until I'm healed after this coming Thursday's hand operation. When I DO eventually do it, I'm just going to use white (or maybe yellow) hammerite.

Something I DID get around to the other day was applying a bit of sikalfex to extend the flow of water off the roof an inch or so in order to miss the edge of the rear portholes. 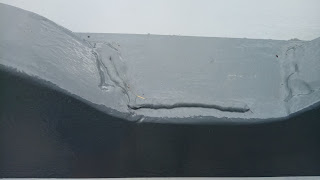 I painted over it so now it just looks like a bit of poor welding - it works to a point but when the rain is VERY heavy, it still goes over it... ergo, I need to do a deeper bit which I'll get around to next time I open a tube.  It will at least keep the fly nets a bit cleaner if nothing else.

Speaking (well writing) of clean - I've had all the ropes off again and ran them through the washer...  this time in a zip up cushion cover and as a result, not a single tangle!    They feel much nicer to handle again  and we're both trying our best NOT to let them dangle in the canal.... for now anyway....UNLIKE one of the cats - Sox, discovered she could swim the other day... she was proudly wandering down the canal side gun-whale when a duck appeared and she couldn't resist trying to get hold of it - you should have seen her face though when she ended up in the water... SHE was quite surprised she knew how to swim .  Annoyingly, as I couldn't reach down low enough to get her out, she ended up doing a few lengths of the boat before she had the sense to swim around the stern to the bank side where I COULD pull her out.

We half expected her to be sick a few times once she'd finished licking herself dry but we got lucky...  She's being a little more cautious now... George will be next  though as he keeps rolling around right on the edge of the concrete so it's only a matter of time before he ends up falling in.

Hope the op goes well on Thursday. Don't do too much too soon!!
Kath (nb Herbie)