Sorry for the absence - we've had a weekend away with my family to celebrate my parents 50th Wedding Anniversary. 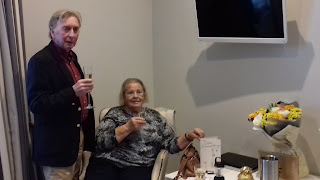 We're NOT party folk and in a bid to avoid any fuss, Mum and Dad (aka Joyce and Cliff) had decided to take us away for a weekend to be together at their expense.  Given that Andy doesn't work Monday's, we asked to add on another day happy to pay for it but my dad wouldn't take a penny - moreover, BECAUSE we'd asked for a bath, we ended up in a superior room. 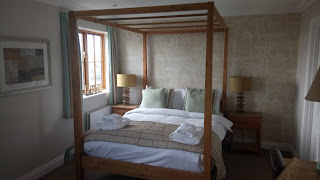 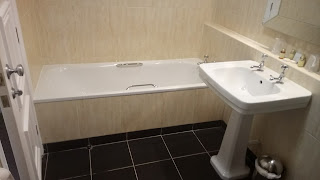 It was an all expenses paid trip (by my parents) for immediate family - which consisted of my cousin Rachael (and Husband Mike)...my brother Ken (and Wife Heidi), their son Sam and of course Andy and I.   There should have been my niece Kim (and boyf Tom) but they couldn't get a pet sitter)...

That's the thing about big families... my dad came from a catholic background with way more siblings than either space OR money.  AS a result, he's the most generous, sharing sort of chap you'll ever meet.... the rest of his siblings being the same - whatever they have - they'll happily give away to anyone.   I couldn't even buy a drink at the bar without my dad pushing some money into my hand - it was the same after lunch on Saturday when a few of us ended up at a bistro a few miles down the road... I'd paid simply because I pushed my way into the queue at the bar but on route home, mum insisted on giving me some cash.

It's a trate I try to replicate... and for the most part I succeed.

Anyway - we stayed in the Victoria Hotel at Banburgh, just up from the Castle.  It's a dog friendly place in certain rooms (luckily not ours) and the lounge/bar areas have quiet dogs sitting by tables watching the world go by...  it's got a good vibe.

We had a meal in their Bistro on Friday evening - (note the bottles of wine at the far end of the table where Andy and I were sitting near Mike)...  suffice to say, Saturday morning was a delicate affair! 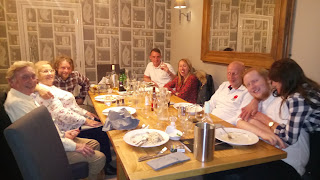 When everyone else went home on Sunday, we continued our weekend - drinking less thank heavens and took a visit to the castle. 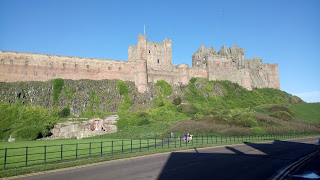 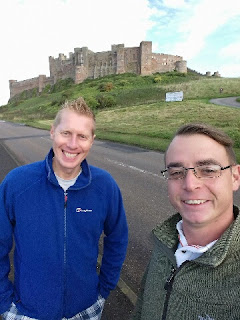 If you think we look rough here, it's because we were...  having set off on a walk to Seahouses (about 4 miles down the road) the morning after the night before...  we managed to get a lift back as we just couldn't face the return hike!

The castle is quite interesting  -  learning it's history from circa 600ad (give or take) when it was first on the map.  The staterooms are well maintained and there's also an Art gallery and Armstrong musueum.    ANDY was clearly bored stupid  pretending to be enamoured by the "stone exhibition" 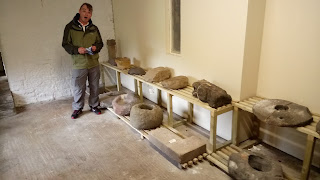 whilst I was more interested in the Accumulator... (same principle as the one on the boat - just BIGGER) 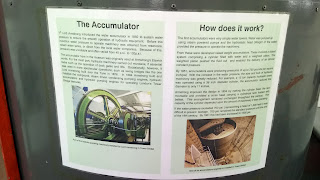 After the Castle, we ended up back at the hotel for Another bath each...  if you're of a nervous disposition, please look away now: 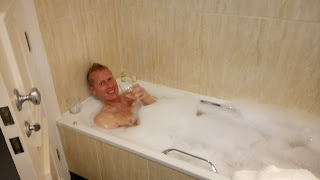 BATHING is probably the only thing we both miss about living in the house/bungalow.... I've always been a water baby - quite often placing the laptop on the loo and watching a film surrounded by bubbles... topping up/letting out as the water goes cold.

Even IF we'd managed to fit a bath on to the boat, we'd have had trouble getting enough hot water.  ANYWAY - it was a lovely change to be able to have umpteen soaks over the weekend.

MEANWHILE - back on the boat, (the cats were at the cattery by the way) during last weekends Gin session with our friends on their boat, we got discussing toilet tanks (again) and our continued frustrations at our 'starboard' list when the holding tank under the bed gets more than half full - we term this as "tipping point".  It's a gradual list that gets worse the fuller the tank gets.

ON plan, it was supposed to be offset by the position of the stove... however, as the wiring loom ended up RIGHT where the flue would have needed to be, we positioned it more centrally - thus messing up my original calculations.

Up to about the 3/4 full level, we've been able to counterbalance using jerry cans full of diesel and the generator locked away.  HOWEVER, once above 3/4's you end up sleeping with your head down hill.

Tony mentioned he had some old steel plates somewhere in his man cave garage and one morning last week, he turned up with 3.

BLOODY heavy doesn't come close - small though they may appear, I could only lift one at at time with my feeble hands. 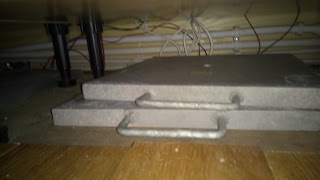 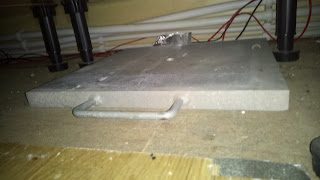 They do fit easily under the port side kitchen units which is really handy.  The result being we can get nearly another week out of the tank before pumping out... and with the other 2 he gave us a few days later, get the tank almost full!

OK so it's an awful thought but fiscally, that's potential saving of 4/5 pump outs per year (circa 70 quid) ... a saving  certainly not to be sniffed at!

Does the boat not have a list the other way when the tank is empty now though?

All of our tanks run across the boat as it were, the poo tank in the bow, the water tank centrally and then the fuel tank towards the back. This coupled with the boat only being very light to start with, means that we get some very interesting fore and aft movements as the relevant tanks empty and refill!

it does 'a little bit' but that just means the blood rushes to our feet in bad - ergo NOT causing a headache. It can be offset by moving around the jerry cans AND after the 1st week, it's not far off level :-)