Despite my right hand still being a bit useless, this week I've forced myself to get on and make the roof a bit safer...  I've had the rubberised anti-slip granules in my car for months.... AND the masking tape lurking in the front locker with the paint and rollers - just waiting for me to be arsed  some decent weather.

On Wednesday, I could put it off no longer.  Spurred on by a couple of chaps further down the cut painting the roof of another boat, I'd ran out of excuses. 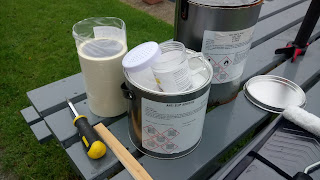 SO I got the stuff out and then had a bit of a ponder how I was going to go about it.  BEING 'Mr Prepared', I'd long ago bought a flour dredger to use as a sprinkler - at work we used to drill holes into a plastic Heinz baked been jar and use that.  FINDING the darn thing took quite a while I'll grant you.  Instead of putting it with the paint or granules, I'd filed it in a foot stool with some paper work I needed to deal with - LUCKILY, whilst getting ready, I spotted Dan (from another boat) who'd asked me about solar controllers a few weeks back and I remembered where I'd put an article I'd saved for him... yes, in aforementioned footstool. 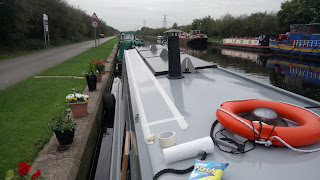 We don't often walk on the roof by the solar panels but I decided to do a strip of non-slip down either side anyway... given that if someone has walked half way down on non-slip, their brains will assume the hole roof is too if you follow. 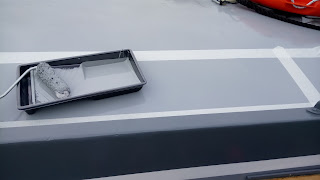 The instructions tell you to mix the granules with the paint and then apply.  Having learned (the hard way) at work on the floor of the chair-o-planes, I decided to roller a layer of paint on first, sprinkle on and when dry, apply another layer to bond granules... doing another final coat when that was dry. 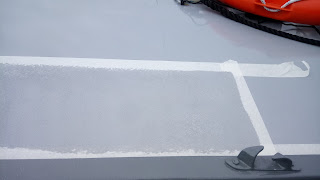 I carried on masking up the port side and completed the roof quite quickly. 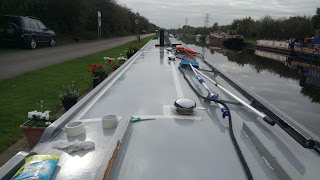 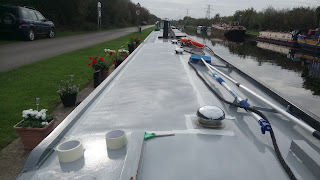 It occurred to me to turn the boat around to do the other side but as clouds were gathering I decided I'd take extra care and do the other side from the gunwale.... Mick was pottering around so I warned him to listen out for a splash and get ready to rescue me lol.

LUCKILY I came to no harm and got the whole lot done, with time for dry before the rains came. 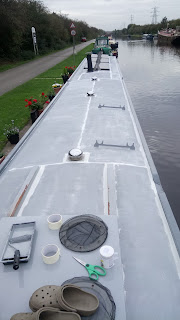 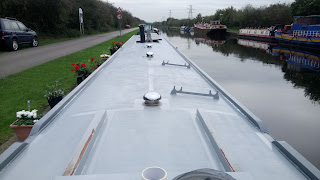 It's not the neatest off jobs I'll admit but once it's had another coat, it'll hopefully serve it's purpose and stop me slipping into a lock.  Time will tell on that one.

WHILST in the footstool digging out the info for Dan, I also came across something else I'd filed away - a long time ago.... it was a sheet I'd printed off, describing what horn signals mean.

I decided to dig out the label machine (I knew where that was, having knocked it off my shelf the other day) and abbreviate them with a view to sticking them outside. 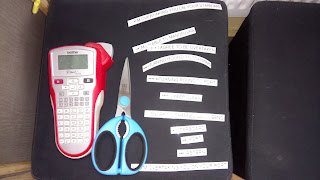 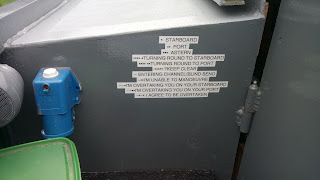 I've stuck them where they can be seen when chugging along - I doubt many people know them anyway but at least if someone does and uses them, they'll be to hand.

I gave old Mick the sheet in case he ever needs them and he tested me on them  - even doing the "noises"... oh and btw, remember his DVLA eye test? - well it turned out he CAN see well enough and has been granted another 3 year reprieve! 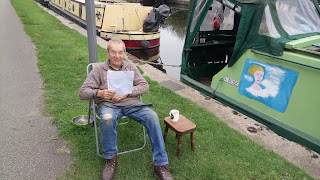