It's been a busy and varied weekend which began on Thursday afternoon when we set off towards Leeds on the boat... we didn't get far - just to Woodnock Lock before the river thwarted our progress.  It hand't occurred to us that it might have been in flood.  Primarily because we'd not had any rain to speak of.  IF we'd paid attention in geography, we'd have remembered that the flow of the river tends to be governed by what's happened UPSTREAM....

SO, as our plan for Thursday had been to go as far as Lemonroyd or Woodlesford to overnight, we patiently waited on the lock-landing for a few hours whilst the level dropped...  THAT was the plan.  It was still in the red around 5.00pm so we wrote the day off (it's 2 hours ish from there to the relative safety of Lemonroyod above Fleet wier).  Around 5.45 the traffic lights changed from flashing red to amber meaning we could proceed but as it'd soon be dark, we stayed put.

For the first time in ages, we set an alarm and were up, breakfasted and away by 7.30.  It WAS a bit windy and the river was still in the yellow but as we were heading down stream it didn't cause much of a problem... that was until we did the turn at Castleford from the Calder onto the Aire.   There was quite a bit of flow coming towards us, along with the occasional crocodile to negotiate. 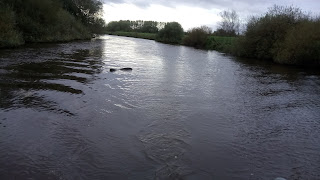 All was going well but on apprach to the lock off the river, I noticed the morso control was loose - very loose.  Once into the lock, I did an emergency tightening before Andy began filling it. 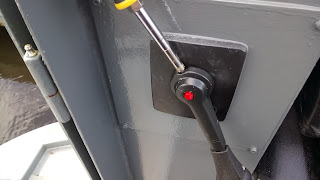 We made good time despite the wind and once safely moored in Granary Wharf, we were joined soon after by a steam powered boat heading towards Doncaster/Rotherham (can't remember) to take part in a musical thingy, in which their role was to blow the steam whistle. 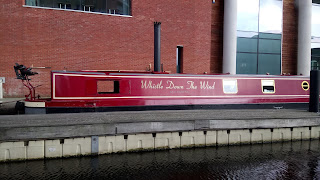 The boat itself was nothing special but the silent cruising must be lovely - I got chatting with the old blokes running it and their passion was infectious.  It's not for us though - bloody hard work keeping the steam up and maintaining it... not to mention lugging an awful lot of coal about all day.    I was curious about how they managed to keep the batteries charged so they explained they've got an alternator connected up to the drive shaft with gearing so it charges as it moves.   I felt a bit daft then.

As Friday evening began, we started to notice a lot of pedestrian traffic passing by the boat in various fancy dress outfits... well I say various, I may have well just have said lieder-hosen (spelling?).  We presumed it was just a works night out and thought nothing more about it.   We'd already made plans to visit some friends to see how their conversion works were going and go out for dinner.  The downside being that as we'd been unable to confirm our arrival (cause of the aforementioned river in flood) the only table available in the Italian we wanted to go to wasn't ready until 8.30pm.... and as anyone over 40 will agree, THAT time on a Friday night is a bit loud to be able to talk.  I don't know WHY these places always think having booming music on so loud that you have to shout at the people you're sitting with is conducive to spending more money...it isn't... in fact, we ended up eating quickly and returning to the boat for a couple more drinks.  When our friends left, we sat on the back deck watching the world go by with a night cap.

It's really amazing SO many different things go on in a small space.  Within a couple of hours, we observed every thing from couples arguing, drug deals (allegedly) young love, PAID for love (if you follow) jolly drunks, aggressive drunks, FALLING down Stupid drunks and even a spot of pre,during and post coital affection on a balcony above! 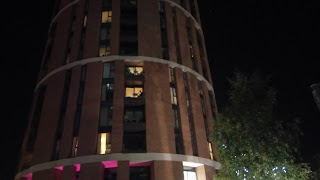 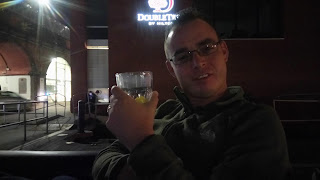 Andy was shocked and it took him at least 4 minutes before he could look away lol.

It really was an eye-opener all the things going on around us.  The atmosphere was for the most part, REALLY friendly and convivial....  Alcohol can be useful like that.

ONE thing that was consistent was the friendly interest passers by have in our life sitting on the boat.  At one point, a group of young ladies  ended up coming on board for a nosey around.  It got a bit cramped with a boat full of people but they were well mannered and genuinely interested and friendly... even the cats enjoyed the attention.  During the visit, a random bloke arrived looking for them and it transpired he was their chaperone/responsible non-drinking adult.  His name was Mark too although we never did get any of their names.

As more and more pepole came by chatting, we discovered it was October-fest  https://www.visitleeds.co.uk/news/Oktoberfest-Leeds.aspx# hence all the wankered  jolly drunks staggering back in swaithes.  One passer by was moaning bout having spent £20 on 2 jugs off beer, only to be told their time was up and NOT being allowed to take it out with her.... some folk later on  managed to smuggle theirs out though.

We did think about going ourselves but to be honest, it seemed like a bit of a waste of money and we were really enjoying the evening watching everyone else whilst whilst we had a few gins.  YES I know we started Dry-October... well gin IS dry isn't it?

Sunday morning arrived and we'd planned to get off home around 7.30am...  UNFORTUNATLY the River Aire had other ideas about that... 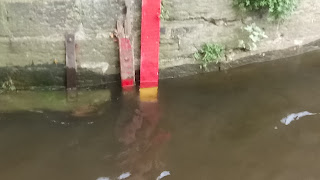 IT was still in the red and falling VERY slowly.  We've got a powerful enough engine to have been safely able to manage it but we weren't going to risk it.  SO went off to weatherspoons for breakfast and kill an hour or so.

An hour wasn't going to be long enough so we did a bit of washing (and tumble drying), watched a bit of telly and chatted to the steam boaters who were also stranded...  every hour or so, we wandered to the marker board and by 1.00pm it had dropped enough for them  to make a dash for it. 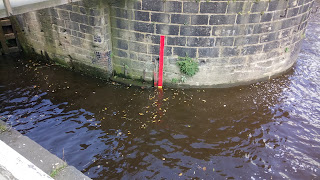 We helped work them through the lock and closed the gates but the flow of the river wasn't helping the helmsmen get out onto the river.  He had to back up and take a bit of a run. 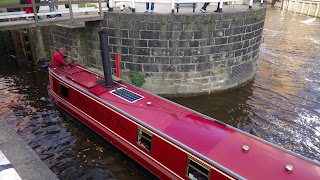 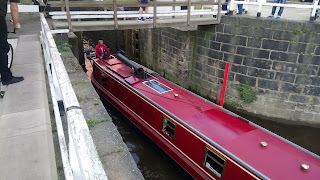 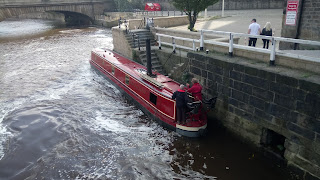 They shot off down the river and did appear to struggle a little with the current as they turned the corner under the bridge.

WE gave it another half our or so and then made the same journey - complete with our life-jackets on.  Rather helpfully, the chap who skippers the party boat, worked the lock for us to save me having to hover on the landing to pick Andy up and we shot off downstream too.  To be honest, whilst it WAS a bit fast flowing, the engine was clearly up to the job and even the turn into Clarence dock above the weir was negotiated safely enough with a bit more power requited than usual.

It was a lovely day and we made really good time, going with the flow down-stream. 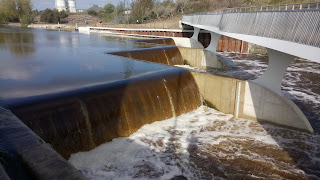 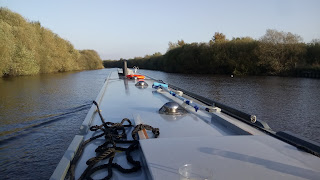 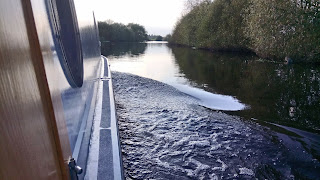 The new weir at Knostrop flood lock has now been completed and  you can see how much water was still coming down with us.

Luckily, when we got to the Calder, it wasn't as high as the Aire had been and although we did need to put a few more revs on, we made good time - OK, so it was dark by the time we got home and as we we'd arranged to meet Tony and Vicky in the pub for a drink, we had tea on the hoof in the dark. 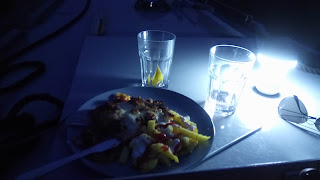 The reason it looks like "dropped" lasagne is because it WAS lol.

No matter,  we were safely back on our home mooring by a little after 7pm...  and I proceeded to batten down the hatches/tighten up the ropes well in preparation for the storm heading our way..