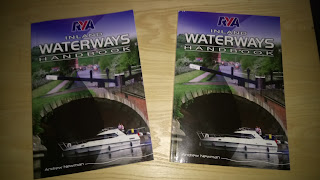 We kept our plans to undertake this a bit secret I'll admit... MAINLY in case we failed it.  A select few knew of course that on Thursday gone, we had our first (of 2) training days.

Typically, it had rained hard in the hills overnight which meant the river was angry and the flood gates locked shut.  This meant our cruising range was limited to the canal with the automated gates...  and of course along with the flood  conditions, the wind was blowing a proper hoolie which made some of our manoeuvring fecking difficult a little more challenging than we'd have liked.

To be honest, neither of us particularly relished the idea of being assessed -  both having left school an AWFUL long time ago.  My most recent training/examination being a week long intensive Microsoft Certified Professional course at York University which (whilst I did qualify) nearly tipped me over the edge... it being full of 18-22 year olds all keen as mustard  to learn to PASS the exam at the end to prove they were brilliant IT boffin whereas there was I - in my 40's, ALREADY an IT boffin but struggling to do it Microsoft's way.

With the memory of that awful week burning in my head, when the trainer arrived we were both pleasantly surprised to discover a retired Physics teacher and scout master with 40 years boating  experience and a relaxed training technique.

The first hour or so was spent sitting in the boat chatting about our boating experience whilst he showed us some of the models he'd made to demonstrate various lock mechanisms AND boat manoeuvring techniques.   We set off chugging around 11 am and it didn't feel like training OR assessment.  We knew he was watching everything we did and ticking off boxes in his head - It didn't matter though... it was a relaxed and pleasant affair.  Every so often he'd ask a question about positioning or how what we were intending to do on approach to a lock - we were both quite candid in our replies... even as far as saying that whist we intended to do one thing, IF on approach the wind messed things up, we'd reassess and formulate another plan on the hoof.

Initially I felt that might NOT be the right thing to admit but it worked in our favour... being prepared and able to  try something else WAS the  correct approach to safe boating.

Given we were BOTH wanting the qualification, we'd planned to take turns at the tiller and swap roles periodically.  We went as far as Foxholes where we tied up and stopped for lunch.   This gave the chap opportunity to assess our mooring techniques and discuss springs etc.  The spacing of the rings at our chosen spot was NOT ideal but sufficient to explain the differing options none the less.  After a chatty lunch (previously prepared by yours truly and left in the oven to reheat whilst we chugged) we set off again towards Fairies hill before turning and heading back home.

Poor Andy was at the tiller when we got back to Kings lock which is notoriously windy but I tried to distract the chap whilst he wrestled to get off the lock landing... I'd almost managed it until he pulled into the lock and the wind did it's usual trick of placing the boat no where near where he'd intended to put it.  No matter, the point being that he was able to correct it and retain control.

Soon after he passed the tiller back to me to continue the rest of the journey homewards.  Whilst waiting for the next lock to empty, the trainer suggested that if we both wanted the qualification, Andy would have to spend more time on the tiller - we've previously gotten into a bit of a routine with me steering and him chatting working the locks.    Once back on our mooring we did a bit more classroom work (if you can call it that) said our goodbyes and agreed to do our 2nd day on Sunday - subject to river levels as we'd need to go up stream to work through manual locks.

On Saturday morning, we decided that whilst usually I'm the one on the tiller when we approach Fall Ings lock, we should have a practice with me being crew and Andy driving.  The river had gone down but the warning light was flashing read ... flashing red means navigation unsafe.  NOT to be deterred, we took a look at the board and the water whilst had been in the yellow was well down into the green.

I phoned CRT to ask for an explanation and was told the light was a bit dicky!  Still a little apprehensive, Andy motored into the flood lock and off we set up the river.    The wind was still blowing quite hard but he tied on to the lock landing perfectly and between us we made it look easy.  Typically no one was around to observe our success.

Confident at his ability, we returned home and prepared for day 2.

Yesterday's weather couldn't really have been much calmer and everything went swimmingly.  Andy taking the boat from the mooring up the river and into Fall Ings perfectly.  Things briefly went ary in the lock because we shared with another boat (which was re-locating from Stanley to Dewsbury ) Marina) and rather than climbing the ladder and holding our boat steady from the lock side, Andy opted to stay on board - the result being a few bashes and clonks as the instructor and I wound the paddles up.

Whilst talking with the other boat, it transpired their engine was over-heating.  Their intended route requied a couple more river sections before getting into the (relative ) safety of Broad cut.  With this in mind, we decided to go a little further upstream than planned to proved safe escort in the event they broke down on the river  - the theory being we could tie them on to stop them going over either of the weirs ahead.

As things panned out, their boat made it ok but our intention stood us in good stead with the RYA chappy.

The extra miles added a couple of hours on to the course but gave us all opportunity to play at turning on the river a few times.

ANYWAY - around pm we got back to our mooring whereby he confirmed he was happy with our ability and produced our certificates. 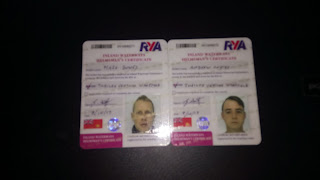 Not flattering photo's but I suppose they never are.  I'd have preferred "Marti Pellow circa 1985" on mine but apparently you can't do that!

So there we are -  we've done it now and another step closer to being able to run "Ellis" as a hotel boat in the spring... First Aid here we come!

FYI - the RYA instructor we used was a chap called Geoff Auty.  He's the Scout leader trainer.  I came upon him via an enquiry on their website I'd sent a couple of months back after following a link from the RYA.  Initially, we'd planned to book with Bear Boating up at Apperley (spelling?) Bridge and do it on one of their boats....that would have cost us £275 EACH!

Geoff on the other hand does it on a voluntary basis - either on the Scout's boat or your own .  He charges the costs of the paperwork and RYA book  (£20 each) and if you're NOT using the scout boat (which they charge out at £80 a day) suggests a contribution to Scout funds.  We gave him the daily hire rate which he'll pass on so all in we had the 2 day course and certification for £200 for both of us.
A saving of £350.

Whilst the saving was important, the best thing about it for us was being able to do it on our OWN boat.