Sweeping the chimney and a new coal bucket....

Our lives are SO exciting I'm sure you'll agree!

Well, dull as it may be, keeping the chimney clear is rather important... if you don't, at best you'll get a messy roof - at worst, it'll kill you from co.

SO, the other day, I went looking in the gas locker for a bit of chain to dangle down and wiggle about (all very technical isn't it?) but whilst looking, old Mick came over and asked what I was up to.  It turns out he has a suitable brush.

To begin with I removed the fire bricks to make access to throat plate removal easier...It might have been an idea to have left it a couple of hours though as it'd been in over night and was still quite hot. 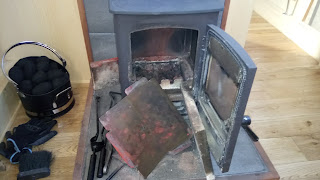 Once  that was out, I got on the roof and removed the china-man's hat (coolie thingy).  Mick warned me that once I began shoving the brush down it might get wedged so it' be a good idea to have a pole ready...

Having thought it through, I decided to do it the other way around - i.e., pull it through from the bottom.  I rummaged in my chaotic tool cupboard handy shelf of bits and bobs, for some para-chord which I threaded down from outside and then tied to the brush handle. 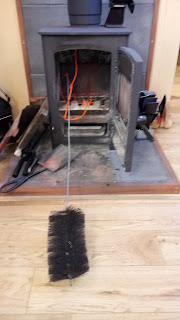 Having gently positioned the handle inside, I closed the door AND vents before going back on the roof to begin. 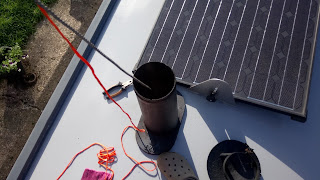 I pulled it through a few times and have to admit, was surprised just how much gunk was in the grate when I came to clear it out.  It does draw much better now though and ever since, we've not had any muck on the roof either - even when the fire is shut right down for over night...  success.

I'm really enjoying having the fire on all he time now - it CAN be a bit if a pain running out of coal (in the boat) when it's wet and windy outside ... the existing coal bucket, whilst looking OK, didn't really hold enough for more than 1 day ... and that's 1 day at current usage rather than "winter"  - SO, we went into town to look for a bigger one.    First stop was a shop called Scartop.  It's a brilliant store with everything you might ever want for the home.  The downside being, a lot of the things you want are NOT cheap... and of course we did find a bigger one but at £29.99, decided it was too dear.

Next stop was Homebase - having modified the search for a metal bucket...  t'dah 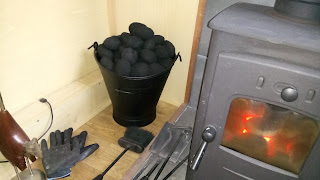 AND only  a tenner - BARGAIN!

It holds 2 and half times the amount the little one does so, combined with that, we can go nearly 4 days without getting wet now... probably 2 days when it's really cold.