Bah Humbug, a bridge over troubled water and medicine ....


The next person whom I bump into that says to me "if I don't see you again before, have a good Christmas" is going to get a slap.

For heavens sake  - it's still the first week in December.  I do wish people wouldn't get so wrapped up (no pun intended) in all this MEDIA hyped Christmas rubbish...  it wouldn't be so bad if even 10 % of folk actually believed remembered what started it all.

Yes I know I sound like a right miserable old git - (I suppose I can be) but when you're a "grown up" (loosely speaking), Christmas is nothing...  other than a time when finances get stretched, unnecessarily.  Now OK... as  children, we were lucky enough to have lovely family Christmases - my dad would take a couple of days off work, relax (a bit) around the house and even find time to do a jigsaw.  Presents were always in abundance and I was rarely disappointed.  In short, it was lovely.   FAST forward into adult life and it's just bloody irritating.  IDIOTS spend ages in supermarkets, buying whatever festive rubbish they force feed us and dont get me started on the queues..... and for WHAT ? ... the shops shut for ONE day.  arrrgghh.

SO - Xmas ,forced-ivities a side,, we got confirmation this week of something that has been rumbling in the background a long while.  Earlier in the year, I 'spotted' (quite well hidden at the time on a map rather than stoppage list) that the Ramsdens swing bridge here at Stanley Ferry was to be repaired/replaced in late January...  Well, earlier in the week, the mooring holders all got an email from CRT to tell us it's happening.

The annoying thing is, that in order for this to be done, we're going to lose 1 permanent mooring and 1 visitor mooring (1 each side) and from reading the email, it appears the bridge will remain ACROSS the canal - ergo, BLOCKING boat traffic.  At the same time the existing crossover bridge is to be closed off - OK it does wobble a bit). WHY is this being done? - to assist disabled access and make it easier for cyclists ffs. It's not the end of the world I'll grant you but it IS a waste of money AND hinderer to boating movements... It will mean more noise to those on permanent moorings either side of the bridge whilst boaters pull in to open/close the bridge and increase the congestion RIGHT on the water-point/pump out station.

In short it's going to make a quick fill with water/pump-out - especially on a windy day, a pain in the arse  quite frustrating to say the least.... not to mention the potential for "bumping" other boats in the process. hmmmf.

Still, what do boaters know?

Writing of boaters 'knowledge' - the other week, I got involved with a discussion regarding a 'fault' with the algorithms on MPPT controllers which allegedly means they don't begin tracking until the current is over 1 amp.   Apparently, as ours are wired in series (given the long length of the cable I'd figured it was best to have a higher voltage-thus lower current flowing down the full length of the boat, RATHER than massive cables and panels wired in Parallel.) we'll be losing out on some charge.

SO - ever willing to doubt myself  take advice, I got the appropriate connectors and yesterday in the biting cold wind, temporarily re-wired them to see if it made any difference to the current going in to the batteries. 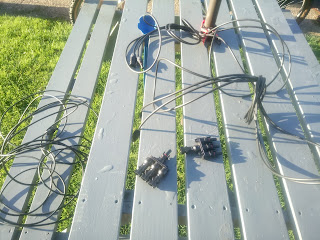 and did it work?

Not a bit of difference... all that happened was I got numb fingers and a bit (more) grumpy.  HEY HO... it was worth a try I suppose.

IN more cheery news, Andy's folks gave us an early Christmas present when we met up with them at his brothers down in Cheltenham the other weekend... which we were allowed to open early.   A bottle of medicine AND instructions on how to make best use of it! 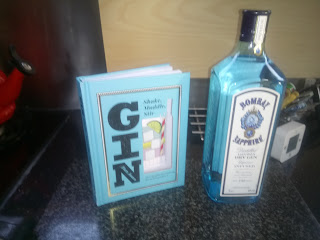 The book has some lovely recipes in it for various cocktails and infusions - the only down side is that some of them involve adding various botanical and WAITING a few days before drinking the gin.  I'm not sure we'll able to do this, as patience is generally NOT on our list of attributes - especially where GIN is concerned!

I just spat my coffee at the screen.... grrrrr!

Try Robin of Loxley gin. It's made in Sheffield and is heaven.
The only trouble is, it's so good you'll want to drink it neat so you get a touch of the multiplying eye much quicker.
Don't worry about christmas, after all it only lasts four months ;)
Rog
nb Paneke

We love the Robin of Loxley as well. Very nice. Not got any in at the minute though. We currently have a bottle of Sipsmiths on the go which is also very nice. Oh and the Adnams Copper House is also very good with some Fevertree naturally light tonic.

Cheers Rog - I've added it to Santa's list (although Santa is very, very poor this year)... I have a feeling he might just bring the fever tree and forget the gin :-(

ah yes - we've had the Sipsmiths and agree with you there. The other week, we forced ourselves to drink through an Aldi gin and it was surprisingly ok.