Here we are then - it's Christmas Eve already... everyone NOW has permission to wish each other a Merry Christmas... not that they needed it but you get my drift! 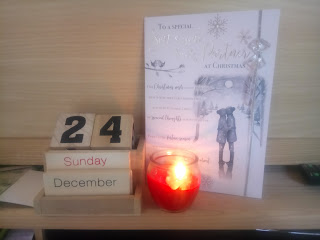 So then - you'll recall we were heading up to my folks for  a pre-Christmas dinner with them? - well, we went to visit on Thursday and enjoyed spending time with them AND a decent meal...  I think it was probably the first time my dad has cooked a Xmas Dinner - Mum's not very well of late... struggling with both Osteo and Rheumatoid Arthritis... ADD to that 2 non-functioning knee replacements as you might imagine, just getting out of bed is proving a struggle.  My dad probably does't see the decline as much as we do - not seeing them for months at a time, it's more obvious to us.  Of course, parents being parents, (and a bit stubborn... perhaps in denial) they've adopted a  "keep calm and carry on" approach to it, WHEN in reality they need to admit that at their time of life, there's nothing wrong with modifying their home to make life safer.

They've gone some way to reducing the risk of mum getting injured by having the bath replaced with a walk in shower...  at least now when she's upstairs on her own, she doesn't have to wait for assistance.  IN reality though, she really could do with a stair-lift fitting - working on the basis that whilst she's having regular falls at least when they're on 1 level, whilst it might hurt a bit and be undignified, she' probably wont end up dead.... UNLIKE  a fall down a flight of stairs, which might kill her.  It sounds alarmist I suppose but at least with  stair- lift, that "risk" would be removed...  STILL,  whilst you can lead a horse to water, you can't always make it drink ...    I hope they come to terms with this different stage in their lives and do all they can to make it safer.... SOONER rather than later.

Anyway - it was nice to see them and spend time with them - Andy and I of course drank a fair bit so staying the night was a welcome treat.

WHEN we got back to the boat (Andy had to be at Work for 2 on Friday) we found this: 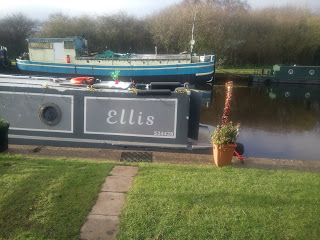 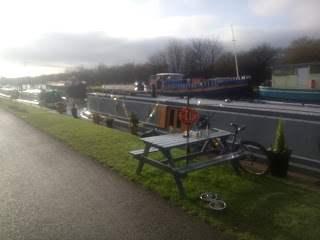 Whilst we'd been away over night,  some friends had vandalised  decorated the boat with tinsel and streamers...  Whilst I'm not a fan of either, it really did make me laugh and as they'd left a nice bottle of Gin from 'Santa' they were forgiven.  In fact, the tinsel might STAY on the swan neck to save me painting it again!

Today is Christmas eve and we'd planned to go for a chug - so as to wake up somewhere different tomorrow ... we've done just that although we've not got as far as we'd have liked - mainly due to the rubbish water pressure at the home mooring... it took over an hour and half of filling before we set off and even then, the tank wasn't full - still, it'll be enough for a few days 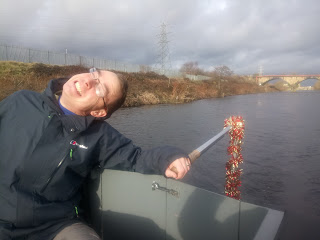 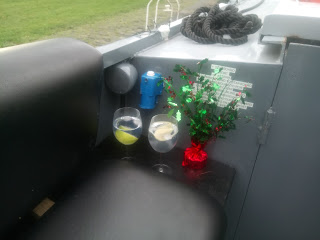 Despite it being 9 degrees  Celsius outside, the wind chill has made the cruising rather cold - in fact after 3 hours (and 4 locks), we've called it a day and have moored outside the Navigation pub at Calder Grove... having turned above the lock where the canal is just about wide enough, we're pointing the right way for our return cruise tomorrow.... we're just going to bung a leg of lamb in the oven and eat when we get back home.

AFTER lunch, we're calling in at our friends for a few drinks and party games - there WAS talk of naked twister, but rest assured dear reader, given my present "festively plump" status, there'll be none of that... it can't be a late night though as Andy has work on Boxing day... I on the other hand will be doing a pump out in preparation for the forth-coming closure in January when crt (in their wisdom) re-instate an unused/unwanted bridge, under the guise of it being to facilitate wheelchair access to the tow path...there's trouble a head ... you mark my words - boaters will get sick of opening and closing it so I suspect it may end up being left open...

Ho, ho, ho... Seasons Greetings to you both, enjoy your cruise ;)

Hope you have a good one guys. See you soon.