Playing with Fire and cabin fever....

HOW cold has it been?

Well,  SAD that I am, I like to keep an eye on both inside and outside temperatures as you know...

The other day, I was a bit obsessed...  MAINLY because we're experimenting with different brands of smokeless ovoid thingys  from different coal yards to try and find a balance between long burning, heat output and dust avoidance.

Having had a bit of a lay in, I was surprised to see at 8.37 am, it was STILL minus 5.4 outside but the stove had maintained a comfortable 22.8 in the saloon overnight. 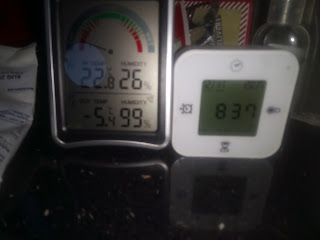 Even the back cabin wasn't too bad  at 19 degrees - I was also pleased to note the SOC showing at 80%... which given we'd had a full night watching Peaky Blinders on Dvd was a bonus, 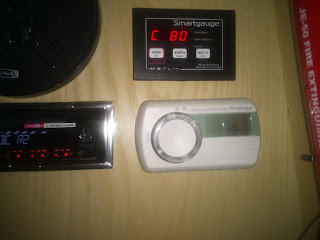 This obsession  interest in temperatures isn't entirely  because I'm a complete saddo - it's as a result of weather forecasts...  WHICH, I've decided  are rarely much use anyway - I mean, at the weekend  WE (as in West Yorkshire) were threatened with huge snow falls  which never arrived.  THEN came the warning of a colder spell and despite the BBC weather page, showing for our locality a range between freezing and minus 2, when I got up to check in the night the cats woke me up for some food, at 3.16 (am) 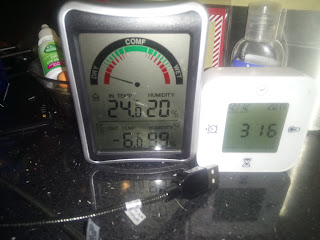 we were down to minus 6 outside the boat  but still a toastie 24 inside...

The next time I checked, at about quarter past 8, it had dropped further to minus 7.5 and the stove was showing it needed some more attention. 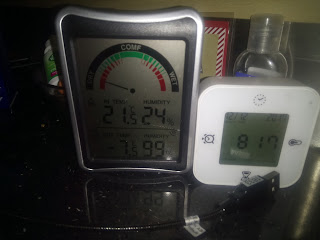 It's a good job I have better things to do, or I'd be emailing the met office and suggesting they try a bit harder! ;-)

SO - the outcome of trying different fuels has been that the one we've been using for a long time - Some unbranded ovoid thing in clear sacks from a coal man in Cudworth at £6.50 per 21kg sack is better than 3 other types, sourced from 2 different coal merchants in and around Castleford... ergo, we'll stick to that.  I suppose every stove is different ... and if it aint broke - don't try and fix it!

Btw - ON the morning it was down to 7.5 outside, the canal JUST about froze over... albeit it rather thinly... 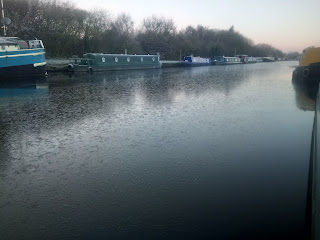 and within a couple of hours it had melted away again.

Cabin Fever has set in of late as due to a Gastric flu we both seem to have picked up, we've been "boat bound" for 3 days now - Coming in to day 4 and I'm feeling little better but Andy is a day behind me...  most peculiar type of bug though... both ends obviously but oddly, the stomach happily accepts food all day long... building it up until early evening when it decides to return everything in an undigested format.

Lets just say, that whilst we are very pleased we fitted 2 loos - I am not looking forward to emptying the cassette in due course.

ON the plus side, we've both shifted a few pounds without really trying this week and what with feeling so ropey, even our livers have had a bit of a holiday.

Still, WHILST we've been hold (holed?) up, it has forced us inspired us to get the 2018 cruise calender on the website finished... in total 22 cruises of varying lengths for guests to join us on.  There are loads of typos and spelling mistakes as already said, but hopefully as people read through it, they'll let us know and I'll correct them - Life is a bit short really to worry about such things and if folk really want to complain, then perhaps boat life isn't for them anyway lol.

We've already accepted that 2018 will probably be a quiet year (guest wise) but we'll make the trips anyway as we WANT to do them.  Over the next week or so, we're going to make a determined effort to get our 2019 diary on-line - Andy has already drafted out the routes so once we've checked they'll work (for us) we'll get web-building again.

Reluctantly, we've also asked for a listing in Canal Junction "Hotel Boat" section.  It's cost a few hundred quid but if we are to cover costs, it's probably a necessary compromise to our "non advertising" idealism.

ALSO - I was chatting with the Marina owner here last week when I went to get some pump-out cards and he offered to put a link on his website to ours... he tries wherever possible to support other local businesses and it's much appreciated.

Who knows - this time next week we could have a fully booked schedule! ... or (more likely) we'll be advertising those kidneys on ebay before the year is out lol.