Naked Twister, a different view and jobs to be done...

Ok  - I'm lying about the Naked twister... (although there was a bit of bum cleavage on show now and again) - more about that in a bit (the twister I mean)...

SO - After our Christmas Eve chug we settled down for a quiet night outside the pub... ahem - who'd have though Christmas Eve would be a loud music night in there? ... oh well, we made the best of it with a couple more drinks to  numb our senses make the music sound sweeter. 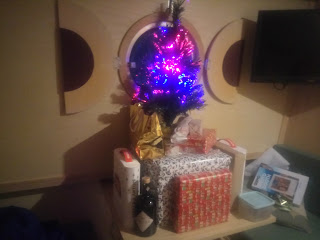 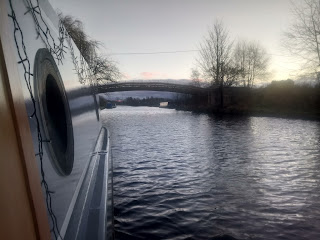 On the boat, we've a bit of an agreement in that a) we don't buy Christmas presents for each other  (there's just no spare room for "stuff" and b) we ARE allowed to buy things for ourself or things we need, then wrap up and allow the other to unwrap.

It works pretty well most of the time... you can see how excited Andy was when he received this: 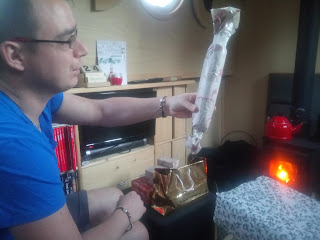 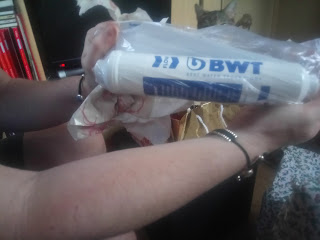 It's a replacement filters for the screwfix water filter I fitted to the boat a while back... it was due a change so that's another little job on the list.  It should be easy as it's push-fit so all that's required is to cut about 20mm of each pipe then push them into the filter...  what could go wrong?

After we'd opened presents (3 mins) we donned our warm clothes and prepared for cast off and the return journey home... Bright and sunny it may have been but BOY it was windy...  the short chug down to Broad Cut bottom lock was interesting... crabbing our way along as we passed the moored boats.  That lock is a pig at the best of times but what with the wind AND the leaky ground paddles, lets just say we got battered around a fair bit AND sneaking out on to the river, then waiting to pick up the crew was interesting too.

Our journey downstream was uneventful until we came to Broadreach Flood lock...  a combination of a spirited river and gale-force winds meant the skipper at the time *read not me* had ... lets call it an emergency stop into the piling on the lock landing... head on.  No serious  harm was one but we'll have to get out the paint again.  INSIDE the boat, every single cupboard, drawer, door and porthole shutter had been liberated and were swinging freely lol.

DURING the journey back, the lamb cooked itself to perfection and when we moored up, lunch was ready to be eaten.

AS planned, after lunch (well closer to tea time actually) we set off on a walk to our friends Sally and Lee's who had daft games planned for the rest of the day...  I'm not good at joining in such things (unless I'm tiddled)... and (ahem) luckily I was  a bit so it was great fun....  IT''s amazing how funny a £3.50 "props game from Wilkos" can be to a room full of rat-arsed merry adults... well I SAY adults,  I was the oldest there and I'm sure I'm still only about 15! 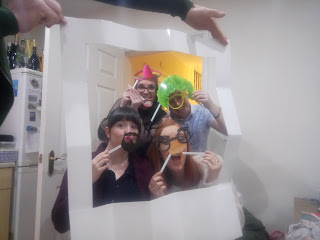 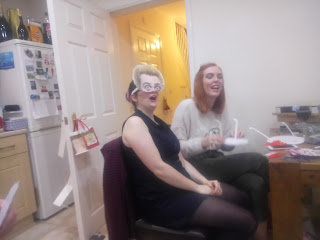 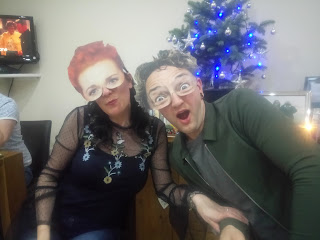 After a round of "pass the sprout" (think pass the parcel but with fore-fits) some other game came out, which involved things that wedge your mouths open and having to say things on a card... 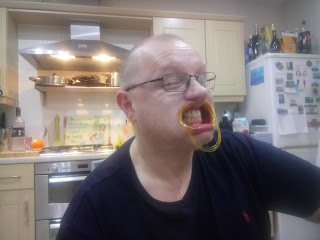 We split into 2 teams (boys verses girls - Andy had to be an honorary girl) but "the girls" all working in Denistry, had a bit of an advantage - AND were WAY too competitive... ONCE I'd done the 'sums' to work out the FAIR scores (them having 1 extra person in their team than us) I we declared it a draw!

It was a silly but fun evening and of course yes, the Twister did come out... a little "too " late for Andy - having already had some kind of accident whereby he broke their toilet seat (and he has no idea HOW) a nap was in order... mid game! 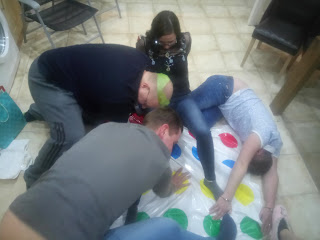 That was the last photo I took before we called it a day... (Boxing day I think)... the rest of which, was a sombre affair - saying things like "never again"...