Happy New Year ...  down hill from here me thinks lol.

SO - here we are then 2018...  and commencement of "dry January"...  it's long overdue again though... we've been a bit carried away for the last few months, so complete rest will do our livers the world of good.

We did go out with a  bang last night though - the planned evening in front of the TV, turned into a New Years Eve party up the cut on a big boat with boating friends...  Of course, having planned on staying in, we didn't have much in the way of gifts to take with us so I knocked up a quick apple and plum flan which went down well enough.  We know we had fun and I did take some photos but for some reason (quite possibly related to gin) they're all a bit fuzzy.... 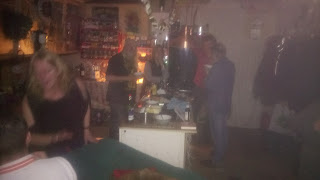 I do recall thinking "must take some coal" with us... but rather than just a lump, took a whole bucket - which we'll need to get back at some point... along whit the flan dish and Andy's jacket.  Anyway...we came home around half 3 and as you might imagine, today we are sitting around watching rubbish TV and feeling rather sorry for ourselves.

It's not ALL been about eating and drinking though - the other day, I finally got around to sanding down the front doors and giving them a couple of coats of varnish...  They've not been right since day one but I think I left it too long as I just couldn't get the stains out of the wood (from the nails)...  oh well... they are better than they were.  At some point in the future, I might just paint them grey anyway.

Usually, I get carried away when I start a job and forget things like dust-sheets - NOT THIS TIME though... I very sensibly masked up the door aperture before I began. 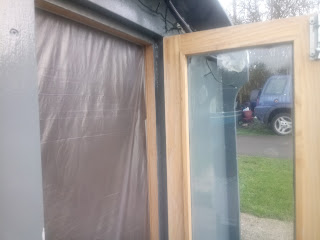 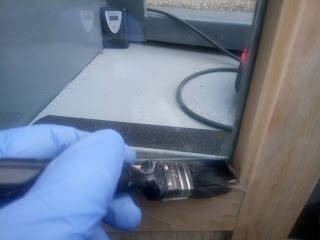 No sooner had I finished varnishing the front door frames, it began to snow.  The first almost proper covering this year... it came down rather quickly and within an hour was causing havoc. 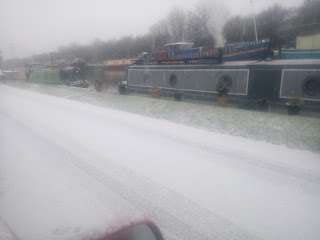 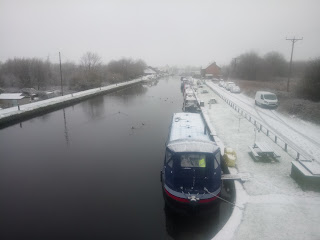 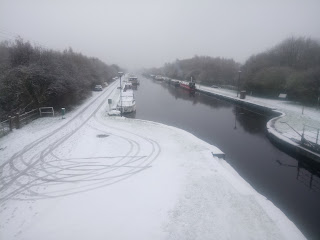 I had to nip into town to pick some post up and do a bit of shopping and when I came back, encountered a poor chap "stuck" on the slope down to the access road in his car - he was unable to move either forwards or backwards... worse still, whenever he tried to apply the handbrake and take his foot off the brake, his car was sliding towards the canal... poor chap was trapped in the car.

My initial attempts at pushing hum up the hill by hand proved useless so I ferreted in the boot of my old Honda and located a tow rope - still in it's packaging.  Having hooked it to his towing ring (once I'd screwed the thing in through the bumper - incidentally, it's a reverse thread.... took me ages to work that out) I tied the other end to my towing hook and pulled him out of danger.  I must admit, to being quite surprised my old banger managed it - even though it should  be 4 wheel drive, somewhere along the line I think the vcu must have seized and rather than replacing it, a previous owner had removed the prop-shaft.

Once safely parked up, we all continued the remainder of our journeys on foot - The chap (and his wife) carrying my shopping down to the boat.

I must admit, once the adrenaline dissipated, it was time for a gin and tonic and first use of the Free Glass courtesy of Bombay Sapphire... 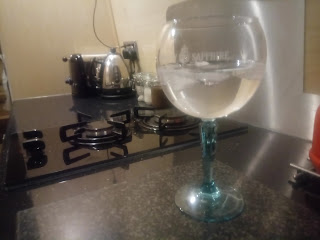 I think it's time for a lay down now.