Bath time.... (us and the boat )and pumpouts

It'd had been AGES since we gave the boat a good wash down... so long in fact, the summer bedding plants were in bloom.  It's one of those jobs that you dread... and once you get started, wish you hadn't  but when it's done feel relieved.

SO - early Saturday morning, we moved Ellis over to one of the water points and I set to with the telescopic brush connected to the water supply.  I won't bore you with the details, suffice to say that it really was filthy and took a lot more effort than anticipated.  Add to the wind factor NOT a pleasant job.  When one side was done, I turned in front of the Ferry and then proceeded to do the other side... It looks much better now and although I was soaking wet and cold, a job well done.

Whilst at the water point I thought we might as well do a pump out as the tank was about 3/4 full and the boat had been beginning to pitch a bit to one side and despite my best attempts at ballasting it  level, we'd began sleeping upside down!

ONCE Empty, I put the machine on Pause so that someone else might get a free pump out should they come along and discover it... I'll take a look next week and if it's STILL on pause, bring the boat down and remove another weeks worth.

THAT said, when I took some rubbish down to the bins on Saturday night, I met a chap with 2 25 litre containers coming out of the elsan point - working out he'd been doing a "manual pump out" himself, I suggested that he might want to bring his boat down - telling him I'd left the machine on pause and he'd get a free empty.  He explained his tank only holds 100 litres and he was currently moored in Woodlesford and had driven to our service block to empty them.  Rather him than me.

In other news, Andy has been going through the "box sets" of dvds we've been watching our way through:  American Horror Story (1-5)... The Walking dead (WAY too many)... True Blood...Game of Thongs....(well it may as well be called that) and a few others I forget.  He'd listed them all on Ebay and has just about recovered what they cost in the first place which is a result - AND on Sunday although initially we'd arranged to meet some friends for a drink in the pub, when they cancelled on us due to work obligations, we decided to have a night in a local hotel so as to enjoy a bath. 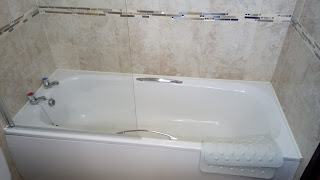 A quick look on booking.com threw up quite a few hotels in /around town ranging from 29 - 110 quid for the night (room only)...  with my discount, we settled on a room at the Best-Western Hotel St Pierre at Newmillerdam.  £44.10.   Bargain...  and 2 long awaited soaks in the bath later, we returned to the boat feeling clean and relaxed and still in credit from the DVD sales.  Result!

In other news, my new camera lens (for my phone) has arrived so at some point I'm going to have a go at fitting it... 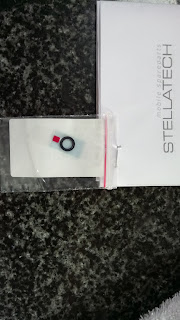 From the various "you tube" guides I've seen, it only takes a hot air gun, sharp Stanley knife and (for me no doubt) a quick trip to A & E to replace it... can't wait.

MEANWHILE - I need to tidy out the places the BSS man will want easy access to on Thursday morning - looks like my car is about to become a "shed" again.   Still, at least I'll be able to do an inventory of what I've got stashed where... I'm sure I''ll find ALL SORTS of useful  things I'd forgotten I had.

We only charge £10 each for baths!