Where did the last 7 days go? - I'm sure it was only yesterday I sat down and wrote a posting.  THAT'S what Dry January does to you... I don't recommend it.

Actually - come to think of it, it's been a busy week.

We had good friend come to stay with us for a few days which gave us chance to practice being in boat with company 24/7.   Being a non-boater, she was initially a little concerned about water usage, toilet operation and electricity supply.  I THINK  it went well and she even brought with her the perfect boaty gift... kindling and fire-lighters!

She also brought with her this: 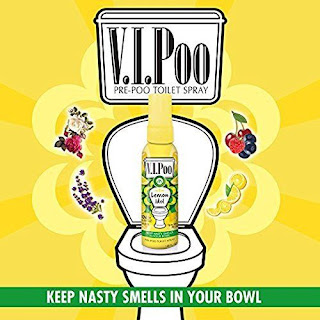 It's not the first time we've had a bottle on the boat (Sally brought some with her during their visit ... it must be a girlie thing) but it WAS the first time it's been used in anger!

Anyway - I'm pleased to report that it REALLY does work... so if you are of a delicate disposition, and embarrassed about the pong your daily ( or whatever frequency)  visit makes - buy some.  NOT in Morrisons though *other supermarkets are available* as it's much cheaper on Ebay!

Whilst she was here, we still had to do the usual chores of filling with water, charging batteries, taking the rubbish etc but we just nattered away as we did them which was nice.

MEANWHILE, the workmen have started work on the swing bridge.  It's a typical modern day method of having way more people than are actually doing anything, standing around whilst a couple work... not to mention  WAY over the top sign-age, fencing and Hi-Vis...  hey ho. 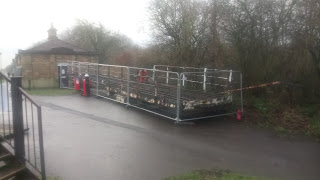 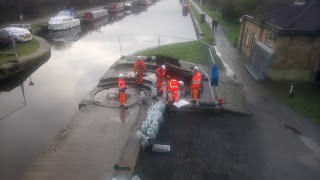 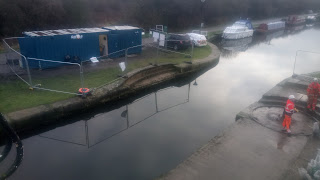 I missed the old bridge being lifted off which was a shame - it's now been cut up into more manageable sized chunks - presumably to be trucked away shortly.  Without exception, everyone I've talked with about this thinks it's a total waste of  money... that could be better spend on other areas such as leaking locks or dredging... hmmf.

So then,  the Diesel leak.  I suppose that's a bit of a dramatic description  but when I looked in the engine hole and saw a a pink bilge, it fair set my heart going.

In reality, it was probably only a couple of litres of the red stuff but it looked much worse initially.  If I'd stopped and thought about it, I'd have realised something was wrong as the engine had been 'searching' for a couple of days AND had been a bit tardy on start up - I'd put it down to the change of oil.

Once I'd utilized 3 or 4 nappies to soak it up and then a bit of washing up liquid to reduce the slipperiness I set to to try and find the source.  At first because I could see a circle of diesel on top of the fuel filter, I presumed I'd just not tightened  it up enough - on trying it felt tight enough but I gave it a bit of a turn to be on the safe side...

I put a nappy under the filter on the floor and then ran the engine for an hour or so to check for further leaks.

The ring of diesel had appeared again.  THEN it occurred to me... DO you remember when I broke the bleed nipple thingy when I fell in the engine hole AGES ago?
https://narrowboatellis.blogspot.co.uk/2016/11/face-plant-into-engine-holeand-snapped.html 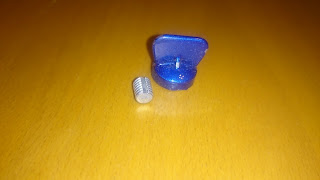 Well on  VERY close inspection *read I put my glasses on*, I could see a tiny drip on the replacement bolt...  a quarter turn later with a 10mm spanner and  that was that.

The engine is now firing up within 1 second again, NO more 'searching' and the bilge diesel free once more - NOTE to self... next time, tighten it a bit more.

2nd note to self:   do NOT put a nappy soaked in diesel on the stove... oh it burns lovely and for ages but a) the cut fills with black smoke and b) the boat smells of diesel for hours.  Oh well - you live and learn.

I have wondered about that VIP but wondered what effect it would have on the tank contents.

er I've not thought about that to be honest ... mind you, these days I spray the bowl with dettol multipurpose cleaner ever day so I suppose it can't be any worse. It still "bubbles" during the night under the bed lol