With the weather a little better (briefly) at the weekend, I decided it was time to make both sets of steps 'non-slip'... it's not like they were particulary slippery before hand but with the non-private bss looming I figured it'd be better to be safe than sorry.

The back ones are SO heavy (even when empty) that it had to be a bit of a team effort to lug them outside. Once safely on the picnic bench, I rigged up the genny to charge the  batteries and then used the other plug for sanding... 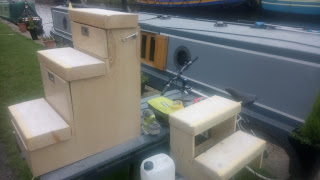 I didn't go to town with the sander - just enough to give the lacquer a key.  Once done, it was just a case of sprinkling non-slip granules over the wet lacquer and (once it'd dried a bit) going over a couple more times with fresh varnish.  It seems to have stuck well enough and what with the non-slip tape I've applied to the front of the steps,  your feet should stay EXACTLY where you put them! 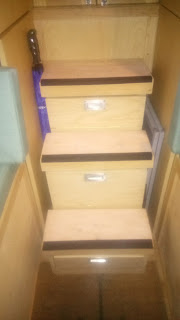 Same for the front steps - ugly looking but given we have to tolerate the fire-exit signs everywhere, we'll learn to live with it soon enough.

Whilst I was in "outside mode" we had a run to Wickes to get a scaffold board for the gang-plank... that's been another of those jobs I just didn't get around to...  SO,  armed with a 4 meter board, and some new disks, began sanding that too 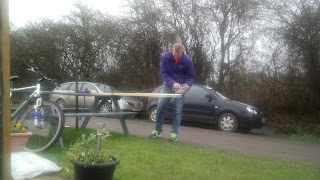 Once it was (roughly) sanded, I got it into a coat of grey primer.... WHEN the weather improves again, I'll slap a few undercoats on it before applying MORE non-slip granules and then painting the final coat of dark grey on to seal it.

It's got a little bit of a warp in it but it'll do  We've managed without for long enough - that said, if we HAD a plank on our last trip to Huddersfield, we would have been able to stay "town side" of the lift brigdge rather than in the badlands.

Another job that was LONG overdue was the drilling of the tiller arm /swan neck thingy for the tiller pin.  Andy's mum had sent us a lovely Duck tiller pin ages ago. 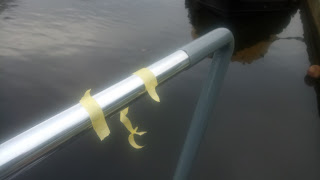 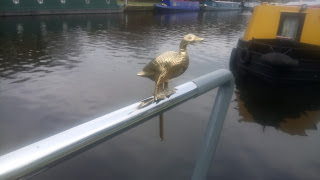 I didn't bother measuring and have to admit it's pretty spot on considering it was done by a ginner  my post carpel tunnel status.

We'll still need to get a little padlock on it for those times when we forget to take it in overnight when visiting rough places we're away from our known mooring areas.

Not long after I'd cleaned up the swarf  I got a text message from Sally and her pals who were on their way back from Flamingo Land and calling into  Ferry for a quick drink.  Well, it would have been rude not to join them so we took the boat down (we needed to get water the next morning anyway) and met up with the Xmas day crew again.

What can I say? - I gave in and had some wine... ANDY stayed on the wagon.  and when I say "some" I mean, quite a few wines...  after which, we invited them back to the boat for a nightcap - Josh and Emily hadn't been on the boat before and we hoped they'd fall in love with the cats and re-home them.  Alas it was not to be...  Sox did her best to charm them but George let the side down. 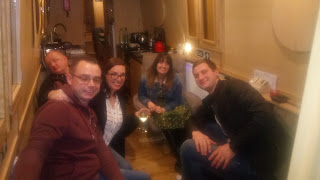 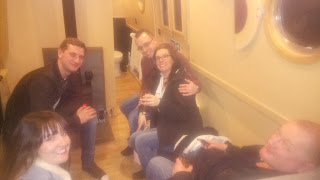 This morning, I've been to see my new business Mentor and I'm booked on a workshop which should be interesting.  She's JUST the right person for the job - VERY upbeat, positive and genuinely helpful.

IN THE MEANTIME, I'm going to look at business plans and enter up my figures in to some kind of cash flow thingy...  I REALLY do need to speak with an accountant about VAT - if we register voluntarily (we'll be below the mandatory threshold) we should be able to claim quite a bit back and live off it for the first year whilst the business gets established but I need to know whether we can de-register in year 2  AND what the implications are.  The Hmrc website may as well be written in Swahili!