Excuse the typing if it's a bit all over the place - the wind is YET again blowing a hoolie and because we can't tie up too tightly  (due to that ledge and  the fact the flood gates are shut - which will mean the water level can fluctuate up or down about 18 inches) the boat is wallowing about like a pig.

Eleanor was bad enough the other night as it was, as it gets dark tonight I think we're in for another rough one.

ANYWAY - Having got the approval in principle for the business operating license, before it's 'ticked off' we need to send the good folk at crt copies of our Helmsmen's thingys, commercial insurance and Non-private BSS cert number.  There's nothing major that needs doing for the latter as when we did it to those standards already and were it not for the recent changes, it'd have been mainly a box ticking exercise itself...  however, various things came into effect from April 2017 which basically mean MORE signs stating the obvious - such as, where the doors are... or the fact that in the case of a fire you can exit the boat via the side hatches...  AND of course - such obvious things, require sign-age.  Hmmf...  oh well... rules is rules.

Suffice to say, I've got a whole lot of bleeding obvious and a waste of money approved sign-age on order from Amazon which I just can't wait to stick up all around the boat.

Another thing that we need more of (apparently) is non-slip surfaces outside - THIS one I'm OK with -having gone arse over tit  nearly slipped in a couple of times when faffing about with the gas locker lid.

The weather is not helping this though as pouring rain and howling winds are not conducive to applying non-slip tape OR painting the non-slip surface additive on.

I'm primed for a break in the weather though, so watch this space.

MEANWHILE - remember the lovely new water filter 'Santa' brought for Andy on Xmas day?  - well  I've swapped it over now.  Given they were push fit and the pipes had already been in use, I cut off about 20mm each side before pushing them in - done and dusted in a matter of minutes and with barely any water spilled. 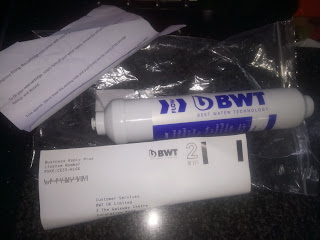 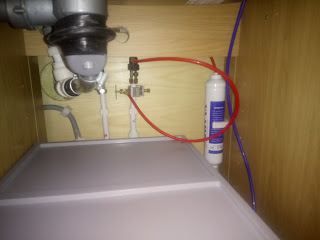 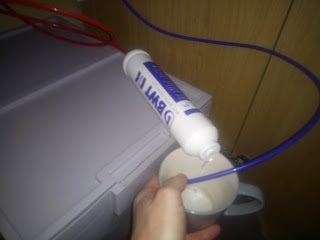 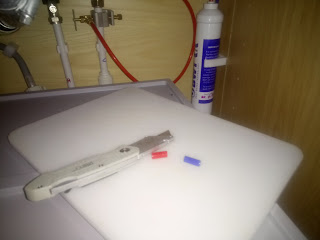 No instructions about "running" the water for a while like there used to be but I filled the washing up bowl anyway...  the drinking water is now back to tasting fresh again.  Not even a taint of chlorine which is good given the fact I soak the hose pipe in Milton every other week.

Right - I had better go outside and tighten up the 'swively things' on the solar panels so they don't bang around (again) all night.