The rumours of my demise have been exaggerated...  only just though - this new man flu seems even worse than it's predecessor.  We're both stricken with it but it's not playing out like it usually does... THIS one's a slow burner but just when you think "I've been feeling rotten 5 days now I'll wake up feeling better tomorrow" - you wake up feeling that little bit worse.  hmmmf.  STILL ... I'm not one to moan as I'm sure you already know 😉...  Our wills are made so worse case (and we've no cash on the boat) we're not TOO worried about boaters rummaging through our useful stuff and claiming the odd bit that will come in useful sometime....

Assuming we DO live, things are going well re the start of our Hotel boat "live aboard holiday experience" life in April.  YESTERDAY (Thursday 1st) we had the "non-private" BSS done to the 2002 regulations... WHICH will CHANGE soon to the 2017 regulations including those for Hire boats...

The chap that came to do it wasn't the original chap we'd use as because he didn't qualify until 2006, he was unable to certify us (no comments required)...  He DID recommend a fellow he knows and we arranged to meet in the pub car-park at 10.30 yesterday morning.  I knew immediately when he sent me a text just after 10 to say he'd arrived he was going to be my sort of chap ... someone early.

Having explained our plans he brought with him 2 sets of check lists (2002 AND the new ones for next time).  We worked our way through them together - me being confident everything would be ok.

We did hit one slight problem and that was re gas installations - you see, whilst it WAS safe (bubble tester didn't indicate any leaks) one of the things was "all connections available for inspection" (those aren't the correct terms so I'm paraphrasing here) and of course  as the oven and hob were not fitted with flexible hoses, ACCESS to their connections necessitated me taking apart the kitchen cupboards/worktop to facilitate access to them for inspection.  I won't lie - it was a bit of a faff and I found myself cursing the chap that fitted them.  TO be fair, I later remembered him saying we'd need to remove said cupboards every 4 years at the time but it was ME who didn't want a perishable rubber pipe using.  DOH!

The only other thing he pulled me up on was a missing sticker indicating the location of the battery isolator  - the thing itself HAVING a label on I thought was enough but we needed one pointing to the area from above deck if you follow.  LUCKILY I had a pack of stickers that still had some left on so I was able to remedy that immediately.

I gave him the wiring diagram I did to show him where everything was and what cables/fuses were used etc. and was quietly pleased when he shook my hand for a job well done.

Working through both check-lists meant that we're confident NEXT time it's due (subject to any future amendments) we'll still be compliant....So that's that - £180 lighter for the experience but we're now legal and I can send the final licence paperwork into CRT for them to tick their boxes.

BTW - we got another booking this week too for our jaunt on the Huddersfield Narrow Canal at the beginning of October so that's 6 in all now  which is quite amazing considering this is our first season and we expected to be travelling alone.  It's a good thing though as we still need to sort out the sale of our kidneys to give us some breathing space lol...  *ponders whether to set up a crowd funding page*
. . . . . . . . . . .

In non-boaty news,  a friend (dental practice related) has been preparing for a quality inspection (some acronym required here but I can't remember what it is) and working SILLY hours in readiness to ensure things were tickety boo - EVEN on Sunday (they were the ones that pulled out of our planned drinks)...  SAID inspection was Wednesday and (unsurprisingly given how hard she works/thorough she is) all was well .

WHAT else is there to do on "wine Wednesday" other than to meet in the Ferry pub for a few wines.  WHICH we did.... Well I say WE, Andy was at work until 8 so I went on ahead and suffice to say, by the time he'd arrived I was seeing things 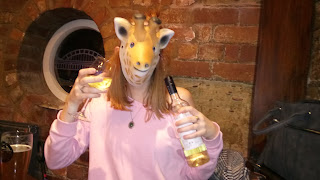 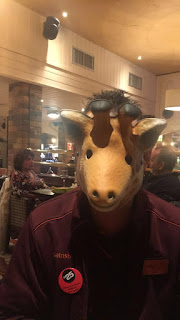 An improvement in at least ONE case 😆

Right - I need to go have another MAN-size lemsip...