Don't you just hate it when you try and corrupt someone for a crafty lunchtime pint and 2 for 1 burger  - only to find them finishing off a pork sandwich with a can of coke in their hand?  Grr - bloody goody goodies.

THAT's what happens to me on 'wine Wednesday' - ... having already been banned (by Andy) from our usual mid-week scush (skush?) - AFTER I'd been to Castleford to buy a couple of bags of coal (btw, we've settled on "room heat" from Steads at £7.80 for 25kgs),  as the sun was shining and I'd already seen my boaty mate Tony pottering on his boat - I thought I'd call in and encourage a sneaky lunchtime libation.  Hmmf.  Personally, I think he's under the thumb and had been instructed to DO something on the boat...  if you don't know what I mean, think back to the "Two Ronnies" and the "worm that turned".... keep looking over your shoulder Vicky! 😀

So then... quilted in to doing something productive inspired by his productivity, I decided it was time to begin the 'Base-plate cold store'  "Wine cellar".

I admit - I've been putting it off for months as the floor took a lot getting down in the first place and I just knew it would be a pain.

Anyway - I remembered an door frame (don't ask) I had left in the garage at home so went to collect some post and loaded it into the car. 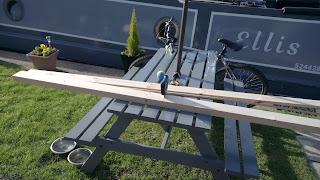 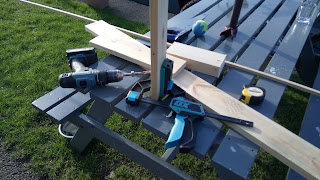 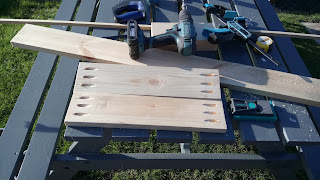 Not wanting to buy any more wood, I convinced myself that it wouldn't look odd using both 1 and 2 inch sections to make a frame.

Having gone back into the boat, I rather sensibly (for once) had the idea to number the pieces on the floor before taking it up.  I used a bit of masking tape and simple 1-36 system.

Once the frame was the size I wanted it, put it on the floor, drew around it and then took it up.  Having already removed ballast here, there were cut sections in the sub floor but of course NOT the place I wanted them...  to add insult to injury, there was also a bearer in the wrong place meaning the last 6 inches of the store would not be usable.  Not the end of the world though as I just moved it up a bit. 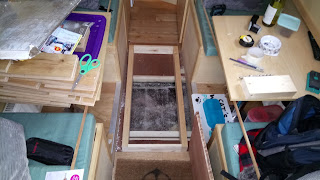 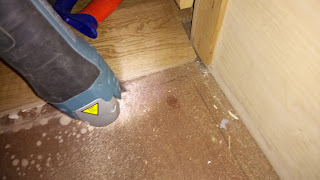 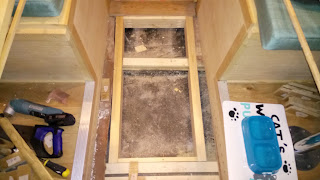 Moving it up of course meant I needed to cut some MORE floor out... and of course having sold my corded multi-too when we emptied the house/garage out, I was left using the battery version.  Luckily I had a few charged up batteries *note to self - rotate the regularly on the charger*.

That seemed to take all afternoon so I abandoned it for the day and came back to if fresh yesterday afternoon (having had chores to do in the morning). 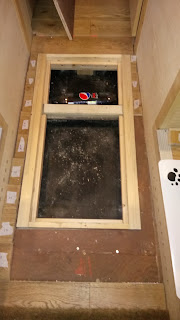 I began fitting back in the cut out sections down each side (once I'd tested a bottle of Pepsi (other coal flavoured soft drinks are available)) would fit. and then cut the sub floor to fit  into the recess.

Whilst I'm sure I DID take more photos as I was doing things, my phone seems to have other ideas... as the next one it has stored is the (relatively) finished result. 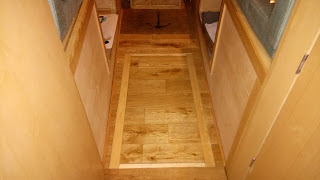 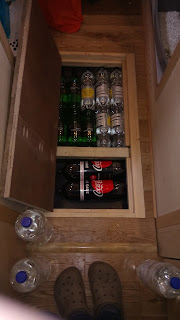 It's VERY sturdy and doesn't flex at all when walked on...  I still need to find some flush handles to lift it out with and I'm toying with the idea of fitting hinges on one side.... It doesn't look too bad and  I'm quite pleased with it.   I still need to paint it out inside... I've got some hammertie garage door paint lurking somewhere so  that will suffice.

Today, I intend using it as a temporary store for the contents of the freezer whilst I defrost it (again)....  I think someone over filled the ice cube trays the other week which meant when the water expanded it came into contact with the top freezing element and stuck fast.  I'm sure it's causing the  freezer to stay on more than normal.... NOT forgetting the fact, getting ice out is bloody difficult frustrating.

Your Base Plate Storage (aka The Wine Cellar) has some nautical history - or so I believe. George Gibson, who for many years ran a boatyard on the K&A and was ex-Fleet Air Arm told me that beer was often stored in similar locations on Royal Navy Cutters. see: https://nbalbert.blogspot.co.uk/search?q=George+Gibson

thanks for that - it does work well though... certainly at present as the temperature is currently showing as 5.2 degrees c... wine and beer perfect... and I suppose it will make a cabbage last a while longer too :-)