Solar Picking up again now and Valentines in the pub...

The trouble with Wine-Wednesday being on Valentines day meant that during  our usual mid-week skush, we were surrounded by tables for 2 looking longingly into each other eyes... YEAH RIGHT .... the reality was that there WERE tables for 2 but most of the folk sitting on them were glued to their phones and having the "curry and a pint" for a fiver option.  Romantic or What?

I was luckier than most however as Sally and Sheree (however you spell it) sent me a message around half 4 to say they were in the pub and had secured a table for us...  well it would have been rude not to join them (we'd originally planned meeting up about half 6)...so I went on ahead whilst Andy was at work.

It's fair to say, the pub HAD made  an effort and we tried to get into the valentines spirit as best we could 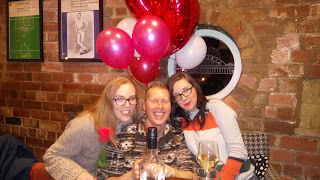 WE managed not to spend the evening on OUR phones, instead preferring to communicate with each other!

Andy joined us after 8 and we had a quick extra bottle tea before he gave the girls a lift home - the balloons are currently STILL in my car!

During our chats, a couple of plans were formed for meeting up later in the year when we're in Skipton - on route back from Liverpool in late June for a meal out - We'll have a visitor on the boat so we'll invite them to join us for the evening too.  Another plan was also hatched for the Xmas day posse to come aboard for a couple of nights before we go in for blacking on 20th August (we're booked into dry dock for a week)... at the time (read, after a good few venos) it seemed a good idea for Sally,Lee,Sheree,Josh and Emily to join us in Leeds and we'll sail back to Castleford so they can get the train back - AFTER an over night for us all on the boat.  WHERE we're all going to sleep is another matter... this might need more thought.

This morning, I did a load of washing and took the boat over to fill up with water (we're getting 4 days now before filling up) and I noticed when I came back from turning the tap on, at about 9.30 the panels were putting in 3.8amps.  The sun must be getting higher (I forget what the correct term is - I've got it somewhere on the solar predictions stuff from the house)... 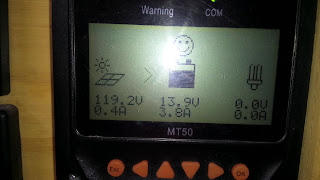 Anyway - in a few weeks it'll be noticeably improved and the currently charging regime of combined generator, engine and solar can be relaxed a bit.