Today I got a call from a nice chap at CRT, confirming the business licence approval and offering to take payment for it and whilst we could  have deferred it until nearer the start time, doing it now will speed up the refund for the remaining balance from the old one. 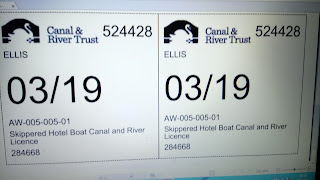 True to his word, the chap sent the vat invoice and new license by return  so we're good to go.

RATHER relieved given we've got 6 bookings thus far. Hopefully a few more will come along soon but it's a great start.

BACK to the weekend,  we'd arranged to meet our friends Tony and Vicky a few boats back for tea in the pub and a few drinks.  Andy has been on the wagon until now but decided to have a day off  sobriety and join in.  We all had a few jobs to do during the day  - including fitting the recessed handles from Screwfix for the wine-cellar

I bought 2 but so far have just fitted 1 in the corner near the freezer... I've forgotten to take a photo of it but trust me it looks ok and does the job.

BEFORE they arrived, I was sent out to get some more tonic water - only having 3 bottles left on the boat...  on my return, I was accosted by Claire, Mick and Andy (and Hettie the sproglet) with a choice of jobs:  HELP Claire fill her boat with diesel or baby sit whilst Mick did it...  Well, having just gotten out of the shower prior to my trip to Tescos, I opted for the baby.

Claire promptly handed the child to me and I palmed her straight off on Andy... who spent the next couple of hours, happily watching ceebies (Andy not the baby)... we could tell she was getting a bit fractious (apparently hungry) but didn't want a G & T so we tried distracting her with Sox the cat... unbeknownst to us, she's afraid of them. 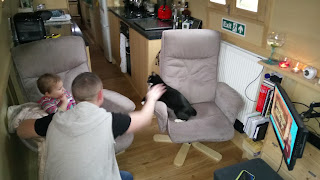 Oh it was ok - Sox didn't take offence but aforementioned child found her voice briefly before being rescued by her mum.😅

NEXT time, I'll take the diesel!

So - Tony and Vicky turned up and admired the wine-cellar... from which I removed a bottle to share... that lasted not very long and we opened another...  Having then gone on to the pub, only to find it too busy for us to get a table in the adult section - and me still in shock from the creche experience, we waited and had a few more drinks until there was space away from the kids.

They had a couple of specials on and I chose Belly pork which was rather good actually... much better than most of the stuff they do.  After dinner , we retired back to our boat as it was our turn to host... last time, us finishing off rather too much of their Sloe Gin.

A very convivial evening was had by all - taking turns in the hot-seat (well stool) by the fire) but in all honesty we over did it... 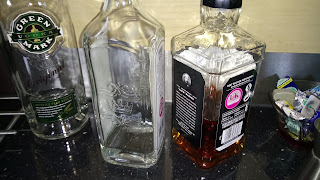 These were full bottles at the start of the evening...

A litle after 2, Tony decided they should be heading off back to their boat ... getting his boots on was too complicated after the JD (he was the only one drinking that) so he went home in my trainers! 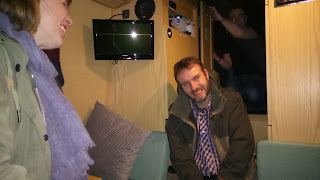 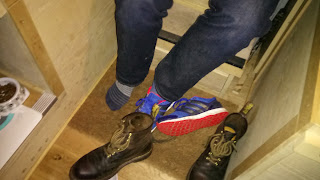 Perhaps you can tell from the inane expression on his face  smiley happy look on his face, he was well gone and I of course escorted them back to their boat to rescue my trainers  ensure no harm came to them (OK - I half expected him to fall into the canal ) and wanted to get a photo  rescue him should the worst happen.

All was well - although getting the boat unlocked was entertaining too... I SO wish I'd videoed it rather than just snapping. 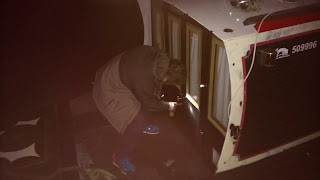 Suffice to say, whilst we all enjoyed the evening, Sunday was a difficult day... that said , I did manage a load of washing, filling the water tank and cooked a leg of lamb.

We're BOTH back on the wagon again - at least until wine Wednesday when I'm hoping to be lead astray by Sally.