Cabin Fever... experimental catering and a new boat is launched.

Well we're still alive - just... despite the grim reaper lurking around the boat of an evening...

Having spent most of the week indoors feeling sorry for myself (well part from the occasional meeting and drunken scush at the pub) - WHEN Sunday morning dawned and it was neither wet NOR windy, I decreed it was time we went for a chug to charge the batteries a bit.

The river was still a bit in flood (well the red light was flashing) so we turned and went the other way - towards Fairies Hill.  It was actually quite a nice (if cold) day to be out on the water - we weren't the only ones having the same idea as we met a couple of other boats charging their batteries too. 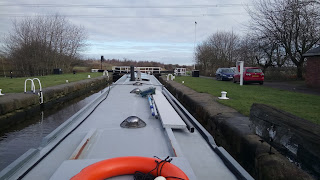 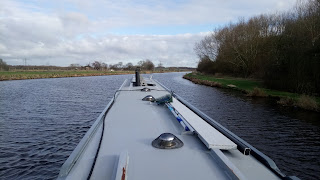 IT occurred to us to go downsstream to Castleford and have a night away from our mooring but once again, when we arrived at Woodnook lock, the  lights said "no".  THAT said,  When I went down to take a look at the board, it WAS in the yellow and dropping so could have made a dash for it to the flood lock - though on discussion, we decided that the Aire might be higher making our dash across it a bit perilous. 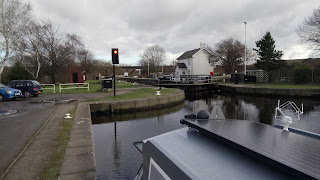 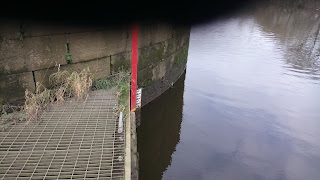 Instead, we filled up with water, turned and headed back the way we'd come. 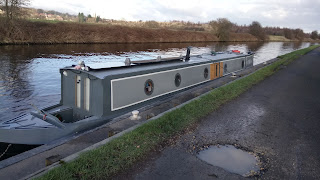 On our return, Andy decided he was going to have a play at some vegetarian recipes:  Red Lentil Pate' , a potato, pesto, pasta and parsley soup along with a Tomato, mozzarella French stick  AND a potato, pepper and mushroom hash. 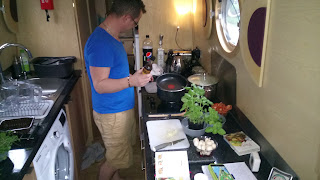 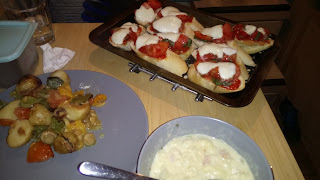 It turned out nice enough but despite often eating vegetarian when I go out, I couldn't help but still feel hungry quite soon after...

This morning, we went into town to do a few chores...  including hair cuts, collecting post from the house and also "mat hunting" - the latter was a total failure but when on route back to the boat, we passed a narrowboat on the back of the lorry.  NOTICING the crane at Wakefield Wharf looking ready for business, we nipped back and parked the car before heading onto the Hepworth Gallery walkway for a proper look. 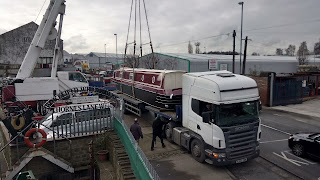 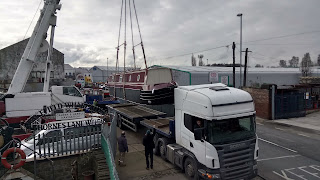 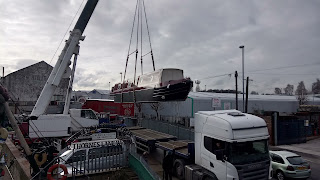 It wasn't until we'd been chatting with the woman whose boat it is for a few mins that I realised they had the SAME delivery driver as we did.  As in our case, just  making one slick reversing manoeuvre to get into the boat yard.

I videoed it here:


IT really brought back those nervous feelings of when ours was being craned in... I was beside myself - even Andy (who is usually quite laid back about things) went green too lol.

IT's a self fit out - well I say self, it's going to be fitted out by someone on the owners behalf - but they had the paint job done before it left the builders.....we'd like to have done that but money wouldn't allow.

It's on it's way to Dewsbury to be done so we'll no doubt bump into them/it at some point - not literally I hope.