So then,  NOW that the count down has began, I'm HAVING to get on with some jobs that have been on the back burner...

Until the other day, we've managed just with bolts on the front door - given it's straight into the bedroom, we've never used it as an entrance/exit point...

Once we've got guests on board, they may wish to come and go as they please (alone) and once we've retired into the crew quarters, that would be difficult.

SO,  a quick nip to B&Q and a night latch later, I thought I'd make a start. 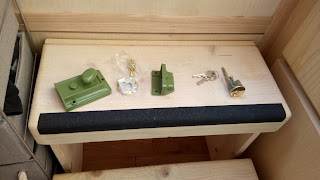 In typical ginger style enthusiasm, I got carried away without THINKING it through fully.... 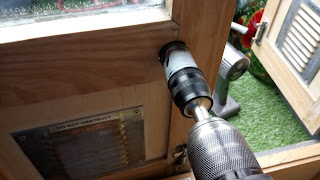 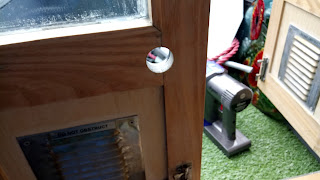 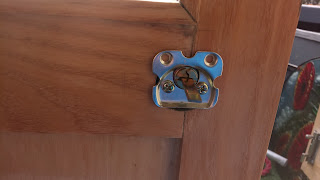 All was well until this point...  when I fitted the latch thingy, only to discover that the actual locky thing(you know- the bit that's on a spring and engages with the rebate bit) DID'NT actually DO anything to keep the doors locked - i.e., it needed to be the OTHER way around.

Undeterred, I took it apart  - every intention of reversing the mechanism   AS you might guess, a "spring" thing flew up in the air and was never seen again.

Another trip to B & Q to buy a replacement - only to find they were out of stock.  SO, I figured a Yale is a Yale  and AS the pack says "standard" I (wrongly) presumed it would be OK.

Silly me.  no - it needed a differently positioned hole to take into account a different sized plate.  Plan c was Take apart the new lock (VERY VERY gingerly carefully) and use the spring from that one as a replacement for the original one...  voilà... it worked and we now have a working lock.

It's not ideal as you have to open both doors to exit / enter but it IS secure.  When time (and funds allow) I'll replace it with a top and bottom closing one like the one on a friends boat which seems much better. 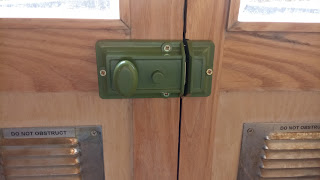 NEXT on my list of jobs, was a little shelf to put tea/coffee on... given the worktop is not very big, having them out of the way will make meal preparations a bit easier. 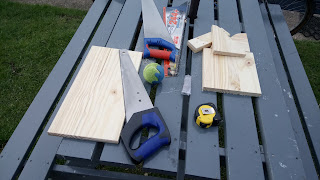 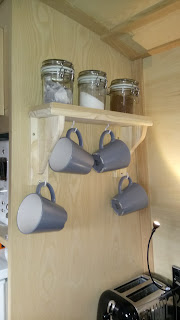 I've put a little fiddle rail on it to (hopefully) prevent things slipping off in the event of rough seas.

In other news, whilst we really DON'T want to advertise as such, we've had a small run of fliers produced and have asked friends to put them up in their work-places. 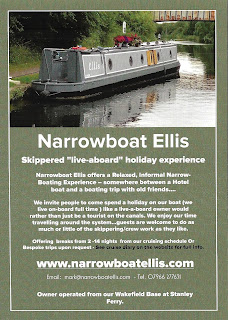 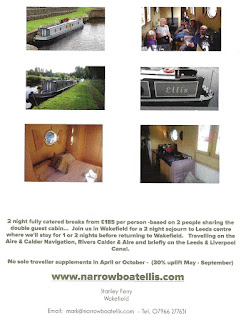 It's an A5 double-sided thing.

We also intend to post a few through selected folk's letterboxes... With a bit of luck, they'll generate some interest for our shorter trips to Leeds and back in the summer...  That's a job for Sunday morning.