Sorry I'm neglecting here at the moment - there are 2 reasons I suppose .  The first being that whenever I sit down to type something here, my conscience gets a prick and I end up working on that ruddy risk assessment for the business licence - I mean,  WHAT has happened to common sense? -   You see, when coming up with a risk assessment for the boat, you have to pretend you've had ALL your brain cells removed - and quite frankly, those type of people are NOT the guests we want - the point of this live-aboard holiday experience is to enrich our lives, not turn us into the nanny state.

I'll give you an example of a line from our RAMS ( risk assessment method statement) - I mean,  they've even got me talking in acronyms now... grr.

2.  Appropriate footwear to be worn.
3. Crew issued emergency response card in case of incident.
4. Walk at a comfortable pace and watch footing for trip hazards.
5.  First aider on boat.
6.  First aid kit on board.
Acton to be taken by:  Skipper/Crew...
Risk factor after control measures:   Low.

Imagine that in a landscape table format and add 101 "other" common sense things and you won't be far off...

SO - I'm still plodding on with that in my spare time.

Meanwhile - you may have seen the Strictly Final at the weekend...  (De de de de de de deh, De de de de derrr ) and enjoyable though it was, I do feel Debbie Mgee (Mcgee?) was robbed - ESPECIALLY as I voted for her twice!  ... until seeing her on the canal thing a while back, I'd never really taken to her... but, on that program with Lorraine Chaise and the other two - (Nigel Havers and Simon someone or other who's name escapes me right now) I took a liking to her and WANTED her to win to cheer her up a bit since losing her husband. Oh well Debbie - we did our bit for you.  STILL, "didn't she do well?".... especially for her age - I struggle to put my socks on some days and she's got 15 years on me!

In boat related news, Andy has finally beaten me down and as such, we've now got some awful and tacky  lovely led Xmas lights festooning the sides (and roof) of the boat...  Here have a look: 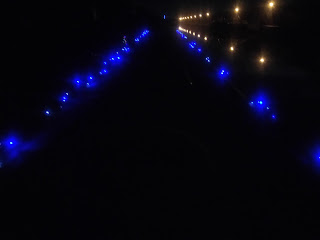 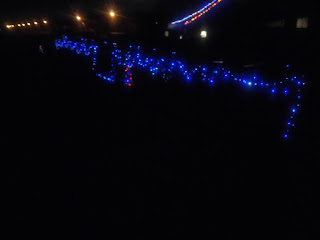 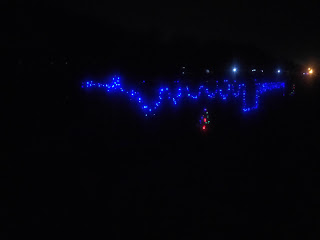 I put my foot down and refused to allow connection to the boat's power supply directly so he ordered "solar powered ones" from somewhere on-line... The little solar panel is pitiful and whilst on a sunny day does "something" - it's not enough... ergo, we took apart the box to reveal 3 * AA rechargeable batteries in each .  AS we already had (somewhere) on the boat some re-chargeable Duracell , we're now removing the flat ones on a morning and replacing with ready charged ones... and then, using the boats batteries (thank you PROPER SOLAR PANELS) to charge them up ready for the next day - are you keeping up at the back? 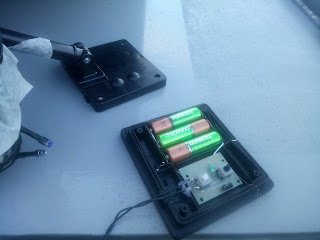 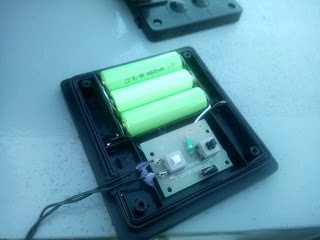 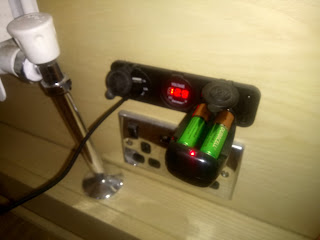 IT's a bit of a faff but it keeps Andy happy and means I don't have to have wires hanging out of the portholes...

They even flash manically  twinkle - Look:

I hope that wasn't too much excitement for you...

TRY as  I may, the whole Christmas thing leaves me cold... I know I sound like a real old grinch, it's just the commercialism of it that really gets under my skin...  As a kid it was different as I've already said.  Still,  boaty folk are doing their bit with lights/trees and Xmas wreaths - There's a boat a few hundred yards up the cut making really quite good door wreaths which I intend to go and buy tomorrow when I head into town.  We're even getting Christmas cards from people on other boats ... which I have to admit is thoughtful  - and a sign of acceptance into "boaty community".  A couple were delivered today and rather than lie and say (what many people say) "oh we're not doing cards but giving the money to charity"... I was rather more candid, saying "thank you very much that's very thoughtful of you - we shan't be reciprocating though as we're spending the money on Gin instead" - HALF tongue in cheek - HALF the truth!

Writing of parents, we're going for tea  later in the week to my folks - I hear my dad's going to cook a Turkey - apparently he's taken a liking to cooking with a glass of wine in hand ... I've been doing that for years and wholeheartedly endorse his method... I wonder if I should "risk assess" the procedure?