AS you know, we've been TRYING to shift the summer blubber at the gym of late... It's not going well!

Despite my best efforts to do what I did LAST time I was fat (circa 15 years ago) it's not working anywhere near as well.  WHY? you might ask... well obviously at THAT time I was working 10-12 hour  days, dieting AND putting in what little other time I was awake, at the gym.

It's clear from the current results (or lack thereof) that poddling around a 57 ft narrowboat, chatting to dog walkers and other boaters DOESN'T burn off the same number of calories.  Hmmf.

To make matters worse,  last week  at the Gym, the cardio suite was upgraded with "London cast offs" and on the new machines, I keep being drawn in to "80s" tv - in particular, the music channel of my youth (eek).

There I am, pedaling,cross training or wobbling away and being forced to watch young, slim people dancing around and singing - MORE annoyingly from the bad outfits is the reminder that (like them now I suppose) I am no longer young and gorgeous - it's not a nice realisation.  For now, I'm going to continue  down my (some would say delusional) route of claiming to be Ginger and fabulous.  HOW much longer I can maintain this front is yet to be seen.

Another thing that struck me about "the 80s" - 1984 in particular is how gay everyone looked and behaved.  It's no wonder we ended up dancing backwards ourselves.  I mean Duran Duran, Spandau Ballet, Owen Paul, Nik Kershaw, Frankie goes to Hollywood - I could go on forever.  WHAT where they all thinking?

Still, they were young .  Hmmmf.

Oddly enough, in spite of my wailing above, In all seriousness, I DO feel like we've settled into middle-age quite well .... we've learned to listen to people in stead of talk at them.... we've learned to stop and THINK before making snap judgments.  We've also learned to give people the time of day-trying to walk a mile in their shoes before forming an opinion.

If only  I'd not eaten so many pies this last 12 months!

In boaty news, having done the 1700 hour service the other day (and therefore ordered  the next 2 sets of fuel,oil and air filters) On going down the engine hole to store them, I was horrified to be greeted with this: 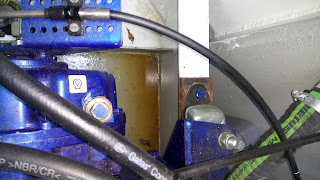 Now it may not look a lot but there really shouldn't be ANY!.  So, before we set off to Leeds Yesterday, Investigations began.

That's when things went down hill - having climbed into the hole, I looked up and saw I'd left the deck board leaning above and decided that rather than wait for the boat to rock and it to smack me on the head, I'd put it ashore. UNFORTUNATELY a certain ginger idiot wearing crocs I'd already stepped in some oil and my right foot was slippy - this had the effect of me (and I don't really know how) ending up falling back down into the engine hole (again ffs) and wedging the deck board under my right armpit  AND clonking my already bad right knee rather hard on the engine block.  The engine remained undamaged but I actually DID cry it hurt so much.

The 2nd officer came to my aid with some pain killers and reminded me to get on with what I was doing!

So, where had the oil come from?  My first thought was I'd not tightened the oil filter hard enough so I gave that a bit more of a twist...  then I double checked the dipstick was in properly... then the filler cap - no... All good.  The gear box was the next suspect.  reaching down with some kitchen roll, I detected a bit of oil on the sump plug bit it DID appear to be fully home - however, on draining it and measuring the volume I discovered only 1.3 litres came out.. and I'd put 1.4 litres in - ergo 100ml of the stuff has leaked out.

Before I refilled (with new oil again) I borrowed a longer handled spanner of Mick (I've got one somewhere but couldn't find it) and ensured the sump plug was as tight as I dare do it.

Having mopped up the spill (with nappies) I then laid a clean white rag under the sump plug and after our chug on the river yesterday, was VERY pleased to find it still while!

We're back in Leeds again now in preparation for our penultimate guest cruise of our first season next week - we've come early as the forecast isn't looking brilliant so rather than get stuck in Wakefield if the rivers are in flood, we'd be better off here and ready to head to Skipton - whatever the weather. 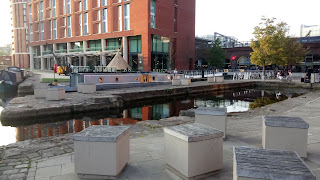 We're trying a different mooring this time - far enough away from the Hotel's outside speakers but  still close enough to be able to hook on to their wifi.

At some point during our stay, we're going to see if our "Nuffield Gym Membership" does actually allow us access to the Leeds one as we were told on sign up.... I bet it doesn't.

Still, the walk there and back will do us good I  suppose.