Tlc and one hell of a storm

It turns out our coming up to Leeds early was a good idea - That blooming storm "Callum"  would have played havoc with our journey... AND as expected, the river went into flood - albeit briefly.

BEFORE the wind and rain arrived, I decided to try and remove some black marks that had appeared from rubbing on the lock landing stage at Broad Cut bottom lock (on the river)...

I think they attached some truck rubber to the stage and whilst it DOES a good job of cushioning the boat when tied up, it ALSO leaves nasty rubber stains all down the side 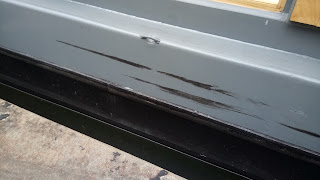 Initial results were laborious - I tried to use a wet one (as in baby wipe) and whilst it DID come off, it took WAY too long and involved too much elbow grease for my liking.

Plan b consisted of the dregs of petrol from the generator and a rag.  In no time it was off  and with minimal damage to the paint.  You can see little scratches but they will sand out next time I do a bit of touching up above the rubbing strakes. 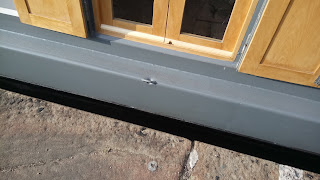 btw - note the prototype anti drip strips I've attached to the side windows - in theory (assuming I can get a strip of silicone in just the right place for them to but up against), they will mean we can have more light when it's raining - currently we have to close the side hatches and it can lead to cabin fever if it's raining for days on end

NOT long after this did the storm hit - talk about a rough few days ... Granary Wharf is a windy place at the best of times but we actually felt sick on occasions ... we couldn't tie up tightly against the side because the water levels kept altering due to the amount of excess flooding over the top of the gates at Office lock. 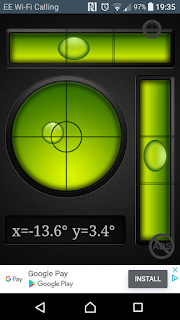 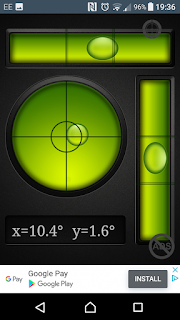 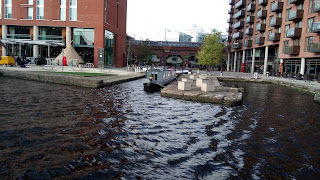 The waves don't look so bad in the photo but trust me, the wind was hitting us side on and we rolled like a stuck pig.

It's dropped finally now and we've moved around the corner outside the Candle House so  as to be able to fill up with water - the water point above Office lock being cordoned off by fencing by the developers working on the bit of land behind it.

Another good thing about moving away from "Fazenda" is we no longer have to sit and smell the glorious meats being served there - it was making us constantly hungry.

We were on the ferry from St Malo to Portsmouth on Saturday during the tail end of the storm. That was rolling around like a pig. There were plenty of people suffering with sea sickness on that crossing.

Thankfully for us we had booked a cabin which you don't have to have on a day sail but it gave us somewhere to get away from the crowds of sick people and ride out the worst of the weather.

Perhaps our choice of film to watch, The Mercy, wasn't the best in a rough sea though!