The other day, I remembered I'd not yet sorted out a  'life ring' for the boat - odd really as it'd been on my spreadsheet from the very beginning... I suppose I just kept putting off frivolous expenditure :)

Anyway - I found a simple one the other day on Ebay.  When it arrived it was addressed as such: 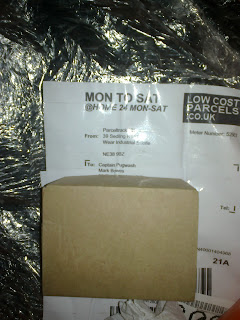 It did make me smile. 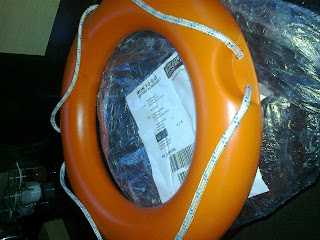 I also finally got around to buying a magnet to fish things I drop (almost daily at the moment) into the canal. 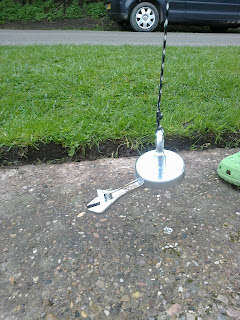 After much buggering about a few attempts, the only thing I could recover from the side was ONE of the 3 adjustable spanners I'd dropped in.  Oh well - I'm sure it will come in useful at some point in the future.  It DID take off a load of blacking when it attached itself to the side of the hull underwater - being SO strong, I had to climb in and pry it off with my foot underwater.  *note to self, try and lower it into the water AWAY from the hull*...

Oh well -  The weather has been reasonable all week so most nights after work, I've managed to get a coat of primer on alternate sides of the boat - bringing the priming job to a close...  we've got 5 coats of primer everywhere except the rear now (which I'll hopefully do tomorrow night) and can finally begin undercoating.  ALL being well, we'll just need 2 undercoats .

The roof is also ready for undercoat now - having managed to get 2 coats of primer on in one day thanks to the glorious sunshine.  A bit too hot to be painting really but we have to do it when a) time allows and b) it's not raining!

IT's been a bit of a pain taking off the solar panels each time but only 4 more times will have it into it's final top coat.  GOD it's boring! 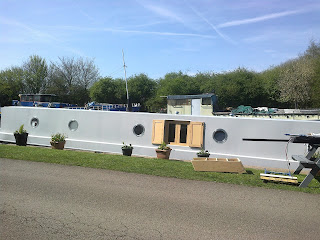 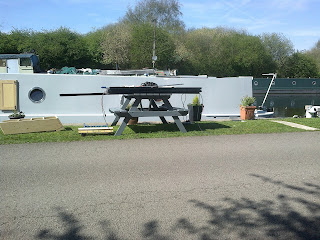 We got brave in between coats and went for a chug - Andy feeling quite relaxed now at the helm and my mooring getting much better too  ... even with an audience. 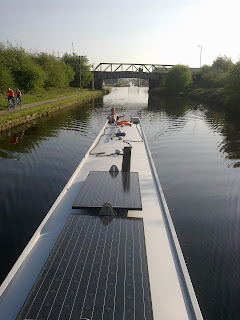 In other news - you may recall I was having the bilateral facet joint injections on Thursday.  I'd obviously gotten hold of the wrong hold of the stick thinking they'd be pain free.... they blooming hurt.  The people doing them were ever so nice however and the chap sticking javelins   injecting in my back was happy to chat about narrow boats which helped take my mind off it and ease my nerves.  I won't lie however ... Friday was a painful day.  The good news is my back is still sore but has eased a lot so we'll see how things progress in the coming weeks.

ALSO - On Saturday lunchtime I had a private consultation with the chap who gave me the steroid /anaesthetic injections to my left hand before Christmas.  I hadn't realised I'd been moved to a private list back then from the NHS one - of course, because I contacted him direct, I've now got a bill coming for a consultation and 2 injections (he did both hands this time).

The bad news here however is that my left one is now pretty severe and he's pushing me to get in the queue for surgery asap ... in the hope of avoiding irreparable nerve damage.  To be fair, he couldn't get all the stuff in it's so tight ...  and I've got a bruise from where he tried in my hand.

The splints Andy bought me are helping me get some sleep though as they hold my wrist/'hand in a position which doesn't aggravate the carpal tunnel during the night - although I do belt myself in the face with them a few times!

ooo ow oo ow you are a brave soldier, sounds excrutiating. FOUR primer, really? I've got to come and see this boat, no excuses, while I can still drive (health probs me too)
Heather

Get the Carpal tunnels sorted ASAP, best decision I ever made to have mine done (both on the same day, they are not keen on that tho) been pain & needle & Pins free ever since (4 years so far !)

We've done 5 primers all over ... the roof now is waiting for 2 undercoats and then 2 top coats if you follow (as does the rest of the boat come to think of it)... from now on it'e brush application rather than roller though as I want to get a decent amount on - certainly the undercoat to smooth off as many imperfections as possible and then rub down.

Yeah I've asked the GP for referral for surgery now. I couldn't have done it any earlier due to the frantic nature of the work schedule... NOTHING has changed there but I've decided making myself long term disabled not something I'm going to do for someone else's benefit. Not sure about both at once though.

We did far better when we went fishing with the magnet last year.
5 forks, 1 knife, 1 spoon, a pair of pliers, a jubilee clip and various screws.
Not the chimney that came off in the strong wind though. It was then pointed out to me that stainless steel isn't magnetic.