I've a few things to update on... unfortunately not necessarily in the correct chronological order - I'm sure you can work things out ... if not, well, it's not like this is important is it?

Rewind to last week - you'll recall we were going to a 'sing-a-long' Rocky Horror at the local theatre that I was expecting to be dire.  With that in mind, I broke the rule of not drinking on the pills... something I was to regret later on.

As it happened, after a couple of glasses of wine - well I say couple... I have no idea how many it took, I quite got into the swing of things...  the MC (if you can call her that) was quite good getting the audience warmed up and we all got our goodie bags containing 1 blue rubber glove... name cards, a party popper and newspaper.  NOT quite worth the 17 quid each we paid to see a screening of an old film that had been on TV loads of times but I'm not moaning (much)...

The words appeared on screen karaoke style and everyone sung along - an awful lot of folk were dressed in costume for the occasion - in fact, we stood out by being in normal clothes.  I remember the interval and the ending but after that it's all a bit of a blur...  expecially the being sick part,  Luckily that didn't happen until we got home.  Apparently I was in quite a state.  *hangs head in shame* - and when I say that I mean 'laid on bathroom floor naked with a towel over me in shame to be truthful'.... never again 😇

BACK in the boating world - The weekend weather was glorious so we finally had a chance to start sanding down and applying fresh primer to the outside of the boat.  On Saturday morning I began with the bow and worked my way down the port-side.

Painting a boat on  a busy tow-path takes longer than you think... especially when every Tom, Dick and Harry walking by stops to chat.... of course me being me, I stop and chat with them - ergo, progress is slow lol.

It's not the end of the world.  We got in to  sanding and painting  mode (Andy Sanding and me chatting painting.    At about tea-time I heard a chap saying "you've missed a bit"  (probably about the 200th time that had been said that day) and as I turned around to shove my paint brush up his nose  respond appropriately, discovered Tony and his wife Vicky/Tori/Victoria ... no he's not a Mormon - it's the same person with 3 names... oh and "non boater hair"!

We've interacted on a couple of boating forums and as they were having an over nighter on their boat, came along to say hello properly and take a look around 'Ellis'.  Of course the boat was a bomb site but oddly neither of us really cared.  We're finally learning not to worry about such things - which is fortunate given the mess I work in!

Once we'd tidied up and got showered, we headed down to meet them for a drink in the pub - stopping off at their boat first for a nosey around.  IT was lovely to have a look in side and I came away with "joinery envy"... Still,  I never professed to be good at anything - remember my motto of 'more enthusiasm than skill :-)

With Thursday's "drinking experience" fresh in my mind I only had a couple and Andy stuck to soft drinks  - despite this, we were the last ones in the pub and had the lights turned off around us.

Back to the boat - Having removed that ballast from the rear and relocated it to the gas locker, we decided blocks were taking up to much space.  SO, a chap from work had offered to get us some off-cuts of railway track. 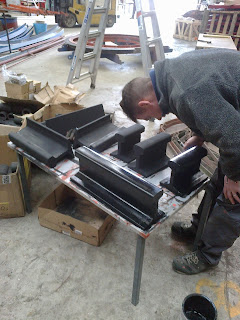 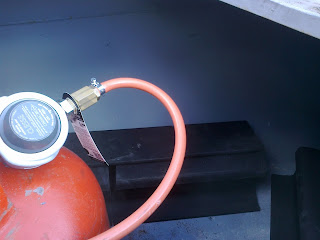 Andy volunteered to give them a coat of rust inhibiting mat black and they're now plonked in their new location.  I'm not sure there's enough actually so I may have to ask for a couple more.

Mr Postman is still delivering things needed on the boat - not very glamorous but necessary was this. 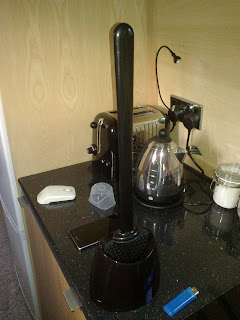 Sit down for this - it's a £40 silicone loo brush... I know that's a lot for such a thing but given the "flush" isn't very strong, you can't very easily rinse a brush and at least by having this kind, there is less chance of anything unpleasant showing in the bathroom.

I did have a ginger moment this week too - whilst on the roof attempting to stop the tar dripping from the new chimney, I fell arse over tit  stumbled and broke the (obviously cheap and nasty) mushroom vent in the lounge 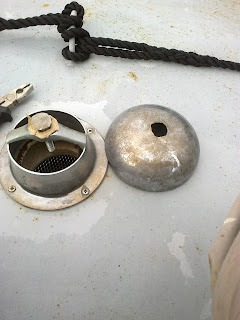 and of course no sooner had I done this did the rain start! - Thinking quickly for a change, I bunged the collapsible bucket over it whilst I went to work removing the good one from the bathroom that languishes under a solar panel.  Having swapped them over, I've bunged a load of silicone on the duffer and ordered one of those space ship looking ones (like we ordered from the boat yard in the first place)

TODAY - the plan is to sand down the roof and get some more primer on... I've also got the stainless steel splash-backs which finally arrived to fit AND the 3rd (and hopefully final) set of rear steps to make.

The reality of course will be (if the sun comes out) we'll potter outside with a brush in hand drinking tea and chatting to people.  Mick (on the boat behind) has bought some new oak flooring that he's started to fit - we have the same conversation about it most days but you know what?   I don't mind in the slightest.!

Your mooring is an especially nice bit of towpath, being properly surfaced and backing onto lots of nature-reservy stuff. When I read yr blog I like to imagine it bathed in sunshine and full of tweeting birds. Over a period of a couple of years I walked the towpath all the way from Manchester to your place and onwards to Castleford and Leeds, so I have somewhere to compare it with. DID YOU suggest you were the more 'normal' people at the Sing-a-long? Er, are you sure? That loo brush is tops. How have I managed without one? Heather

wow! it's all going well and you sound chipper.
using train track is a bit of genie-arse.. speaking of which i hope that toilet brush has a lifetime guarantee!
oh the 'spaceship looking' roof vents.. do you have a link?

Hey Heather - yeah I suppose it is nice enough but it does get very busy when the sun's out... the birds have to fight with the squirrels. POINT taken re "normality" lol... and AS for the loo brush - in truth, it's a bit too big - I may have to whittle the handle a bit!

The vent is just from Midland chandlers - they're called tannoy vents in case the link doesn't work :https://www.midlandchandlers.co.uk/store/category/1935/product/av-097.aspx