The Value of Oldies, rain on the paintwork and a trip out...

I hope you've had a nice Easter - Weather a side, we have.

You'll recall the plan was to  have a chug out to see our old neighbours and have a night or two away from the Easter hoards expected on our home mooring.

Well, that did happen to a point...  although we ended up back here last night rather today as planned - mainly due to the rain (and mosquitoes).

Before we could set off on Saturday, I had to call into to collect 50metres of claret leatherette for the caterpillar cars at work - this couldn't happen until 10am when the shop opened.  Once done, we returned to the boat, topped up with water and set off.  I accidentally "stole" the water point from one of our neighbours who were returning from few weeks away on their Dutch barge... it really was an accident as I hadn't spotted them coming up the cut when we set off.  It was ok as by the time they'd turned and moored near the water point, we were nearly full - it did give us a chance for a proper introduction (and profuse apologies on my part)... they couldn't have cared less.  Lovely couple... especially so as they said they'd been admiring the porthole covers I'd made - him having made square ones a while back and wishing he'd made circular ones.  That's a nice feeling as I DID put a lot of work into them.

Anchor out and connected and we were off! Once on the river, we came cross a couple of boats coming downstream - the usual cheery wave and slight course adjustment later and we were back on to the next section of canal. 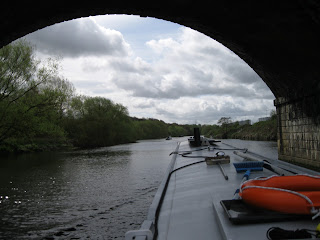 It's funny how much we'd dreaded the river section until we'd actually done it - now it's just the route into town.  Once we'd passed the Ruddy Duck pub, we were again on to new territory for us. 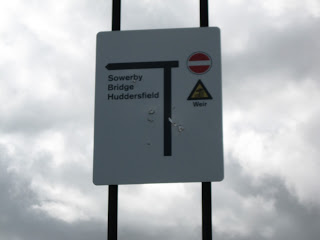 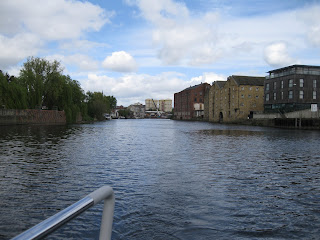 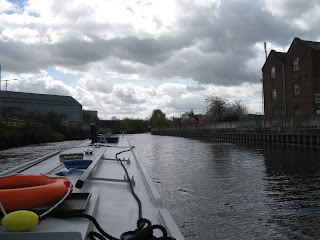 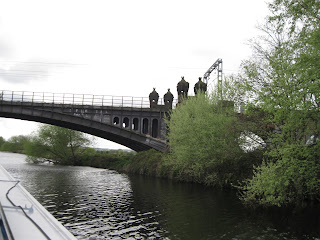 It's amazing how different it feels doing a new stretch in your home town...  the river seemed really wide but it wasn't long until we arrived at Thornes cut (we only live about half a mile from here) anyway. 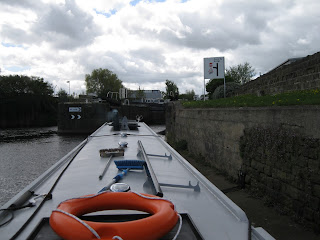 A short chug along here before heading back on to the River again to head up to Broad Cut. 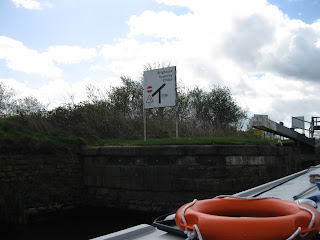 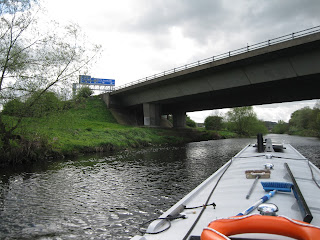 Another first for us... going UNDER the M1 on the river rather than footpath - I hate that road having spent several hours a day on it when I was working in I.T. 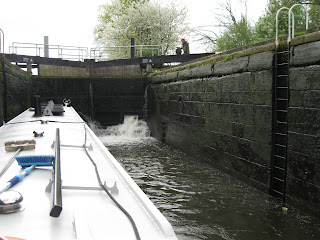 Broad cut lock is a big leaky bugger... but we were soon through it and met up with Barry and Denise. 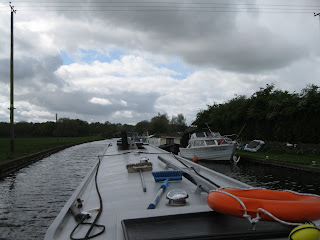 The plan had changed in that they were under the weather so had walked down rather than come on their bikes - a Coffee and catch up began (along with showing them the progress on the boat) and a plan to chug up to the Dewsbury arm, turn  and then return to where we picked them up.

I clearly have NO idea how long things take... I was sure it'd only take an hour or so.  Perhaps it was due to the head-wind all the way, but it took an age. WE battled our way against the wind and through the figure of 3 locks (only 2) and finally through  "Millbank Lock" ... which I think is the shortest one on the navigation...  we certainly struggled to fit in ... even a bit diagonally... GETTING out again when coming back down was even harder!!!

AND it leaked rather a lot - our dry bilge is currently  not so dry! 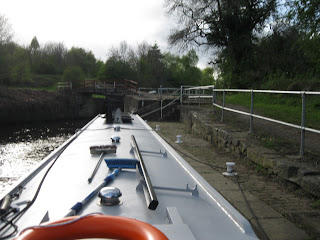 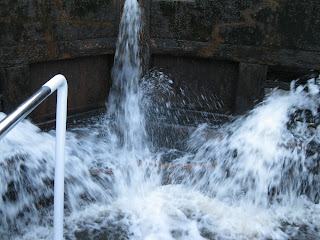 Time was getting on
- in fact, it was about 7.30pm when we got back to the lock above the Navigation pub where Denise offered to take one of the new foam cushions languishing in dinette home to cover it as trial -  and as it was later than planned, they invited us to the Navigation for tea.  We got in the pub JUST in time though as they stop serving food at 8.pm. and it was 7.55 when we walked through the door.

It's been totally refurbished since we were last there - you'd not recognise the place... AND the food has improved considerably too - the prices having increased of course).  Barry and Denise insisted on paying which was greatly appreciated.

During the conversations,  Barry commented that he's surprised we "bother with us oldies"...  we're not - one thing we have learned as we've gotten a little older ourselves is the merit in being friends with the older generation.  I'm not being patronizing here but contrary to many peoples opinions, oldies are not generally judgemental and far more open minded than people think.  We love them to bits anyway and would far rather spend our time with them than people younger than us any day.

We spent the night just above the lock (although well away from the landing area) and bashed in our mooring pins (for the first time).  It was a lovely quiet evening and although quite cold, made a nice change to be away from 'home'.  When it was warm enough on Sunday morning, I began the first undercoat to the port side - HALF way through however it began spitting of rain.  I stopped painting and luckily the trees nearby provided a little protection for the bit I'd done.  After a while, it cleared up again so I bravely continued.... as you might imagine, no sooner had I finished it than did the heavens open and rain set in for the day.  In disgust, I didn't take  a photo and retired to the cabin with a glass of wine around lunchtime 😒. ... a cabin which was FULL of mosquito's!  - it's all well and good having bought those porthole covers many moons ago http://narrowboatellis.blogspot.co.uk/2016/05/porthole-bug-coverscourtesy-of.html but they are NOT much use up in the attic. *note to self - bring them down and on to the boat asap*....

Having NOW checked the weatherforcst, we decided to head back to Stanley.

The return journey was uneventful and took about 2 and half hours - this has been noted for future reference!

THIS morning it was dry so I quickly rubbed down and undercoated the starboard side - having discovered the (blotchy) port side was still too soft to rub down).

SODS law now though - it's late Monday afternoon and the SUN has finally shown it's face ... ggrrrr.... TYPICAL.

Back to work at silly o'clock tomorrow.

yes, you're right, Ageism is stupid.
I could almost be envious of your boat trip, except that I have some brilliant memories of that route. It was part of my 2015/16 project to walk the navigation from Sowerby Bridge to Castleford and then left up to Leeds etc. Each walk would only be 5 to 8 miles and I just enjoyed it all at my own slow pace, admiring the boats and bridges and views. I once did it on a hired narrowboat but that was in 1985 and not much remains in the memory bank. Except this: The day we went up the Dewsbury Arm I cooked the crew a curry that was far too hot and some of it went into the canal for the ducks.

Turning the boat around in the Dewsbury arm was a bit tight to say the least... about 6 inches front and back to manoeuvre in lol. Having walked up it umpteen times, we decided given how shallow it is, dragging the boat's bum up there to turn around wasn't worth the effort. The ducks are probably used to curry in that area anyway ;-)