Here we are - Good Friday morning and awakening on the boat.  This means I have stood my ground and refused to work (unpaid again) and have Easter off....  all week since those last injections in my hands I've been struggling anyway and a lesser person would have taken time off  - not me, I've plodded on wearing those awful splints.

Despite (in spite?) of the pain and hand-fistedness, this week after work I've been making a 3rd set of steps - THESE ARE THE FINAL ONES! (I have a feeling I've said this before)...  no - seriously, these really ARE. 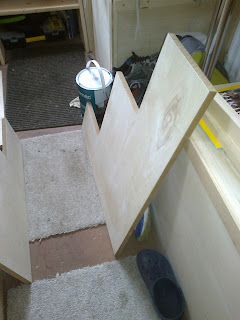 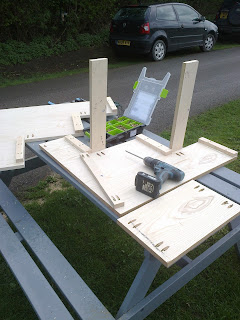 I've used left over bits of ash-faced MDF for the frame and for the steps... some lovely thick off cuts from the bumpers we made at work on the racing track. 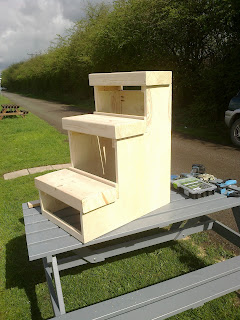 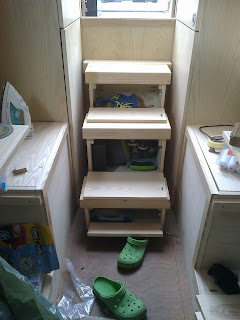 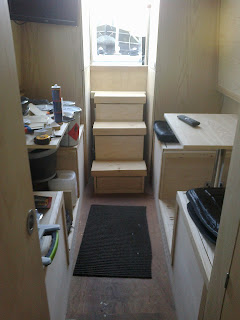 There is no way these are going to flex!

The bottom drawer is deep enough to hold all kinds of tools/tubs of screws etc and the large middle one holds quite a few pairs of shoes.  I've ordered a couple of recessed handles (from China) to fit into the closing flaps and a few more coats of varnish will have them finished.  I've had to make a filling panel to sit on top of the radiator  (which I'll drill a few large holes in to allow heat to pass through ) and once I've done the floor, will attach a couple of cabin hooks to hold them tight against the back.

The original plan was to fit the castors of  an 'elephants foot' to the base so they can be easily pulled out for access to the calorifier and electric cupboard... that MIGHT still happen if I can buy just the spring casters rather than having bastardise dismantle a new one.

As well as making the steps, I've been and bought some more thinner foam (this time from Dunelm) to make revised dinette cushions from... you may recall my first attempt wasn't THAT successful (understatement) - AND was made even worse by having to switch from the 28inch to 26inch desmo legs in order to have enough 'wiggle space' to remove the table tops.

Sometimes you have to admit defeat and this time I'll be dropping in one of each size cushion and fabric to a woman in Wakefield who CAN use a sewing machine to make proper ones... all being well tomorrow morning before we set off - we would have been off early were it not for having to call in to collect some leatherette for work at a shop that doesn't open until 10.  Annoying really, as I ordered it LAST Friday and it was supposed to be delivered but they sent it to their Wakefield branch instead... which only opens Sat between 10 and 4!

I just realised, I forget to mention the Easter plan - doh.  There's obviously still a whole list of things that need doing but  were having a little excursion over night to Mirfield.  The plan is to chug on and off the river from here up to Calder Grove (where we used to live) and meet up with our old next door neighbours (and their bikes) who'll come along for a few miles of the journey before waving goodbye and cycling home.  We'll carry on a while, mooring somewhere suitable and paint one side of the boat into undercoat (finally) and the next morning turn, paint the other side and then head back home.

That's the plan...  subject to change as always but I think we're all set for the bss next week now so nothing is really urgent anyway.