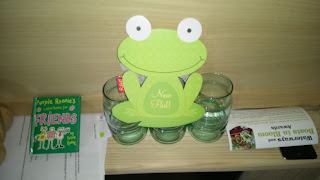 The process of moving from land to water is now complete - on Friday, we handed over the keys to the bungalow to the tenant (Sandra) and spent our first proper night on-board Ellis.  You'd think that given we've been sleeping on-board every night since early June it wouldn't feel any different but you'd be wrong ... KNOWING  that if something went wrong with the boat we could just get in the car and go home had offered some kind of security blanket... and of course with that removed, every creak, groan, drip or scraping noise of boat against tyre, now had the potential to sink "our home".

There was only one thing for it - wine!

Wine I find is the solution to many  of life's conundrums.... ok so it's not but it DOES delay the need to worry about them for a few hours.

REWIND a bit to Monday morning and the realisation that everything had to be cleared out, the place cleaned and painted through out and garden tidied up a bit BEFORE Friday...   had me in a bit of a panic... NOT helped by Andy having gone back to work, only to come home again and go back to the docs for another sick note - that leg had been causing him major problems and what with my delicate left hand, it meant for a difficult week.

Chaotic doesn't cover it - I'd got the piano re-homed to the Scouting association - or rather some woman called Helen who has something to do with it arranged for two young chaps and a van to collect it.  I'd been offered an offensively low amount of money for it by a local "dealer" who polishes them up and sells them on for 1000% profit...  having taken against him on principle, I decided that as it belonged to my Nan originally, ( I'm sure she'd have rather it ended up being used to entertain as many people as possible rather than lining some blokes wallet) giving it to the scouts was the right thing to do.

It was funny watching the "young" folk lifting it though... both chaps were still of that age when you can't admit something is too heavy or you need help and as such, they struggled lifting/carrying it from the lounge, down a couple of steps, down the drive and into the back of their transit - their bulging eyes however, betrayed their attempts at pretending it was "easy" ...

Much of the other stuff had already been sold and what hadn't been was piled into the back of cars and I'm gradually donating it to either charity shops OR (and this is the lazy bit) leaving a couple of carrier bags of things in the facilities block for other boaters to 're-home'...  you'd be amazed at how quickly it disappears.    Now that we'd finished selling stuff, it was time to smash into our 2nd pot of dreams and tot up the spoils. 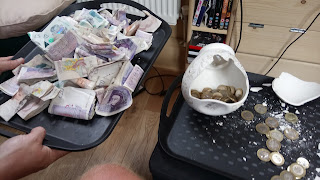 There was a fair bit in there and its now banked in a separate account which we're planning to use as our "spending money" during our first year... for meals out etc.

In other news, I've done a few jobs to progress things this week (in between clearing out the house) - the first was to fit another double USB point in to the side of the temporary TV cabinet - this is so we can plug in the sound bar to charge without having a wire draped across the front and also allow another little usb led light to illuminate the corner behind the fire ... now winter is approaching it'll not be long before it's lit full time again... actually we're both looking forward to that. 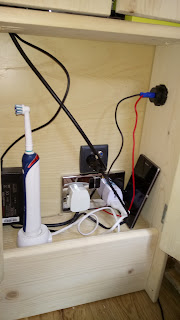 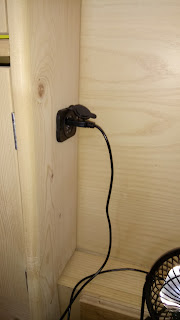 I've also glued (sikaflexed) a couple of plastic boxes into the engine hole to hold "stuff" - mainly plumbing bits and bobs and servicing parts... so they're handy but out of the way of day to day life - I need to order a couple of belts and spare throttle/gear cables BEFORE they  need replacing.... I'll try and do that today.

The cats are now back on the boat until we find them a forever home... George still not settled but I get the feeling that Sox MIGHT be chilled out... 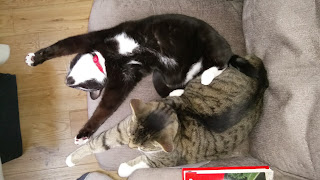 At least by having them on-board again, we've been able to have the odd night away easily without having to arrange anyone to pop in and see to them.

We had a night away on down at Foxholes and it was nice to be somewhere different to the home mooring... 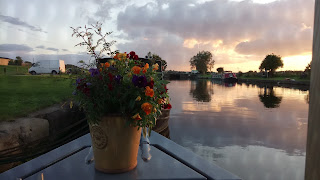 The reason for the trip was actually to lend an elctric polisher to our friends - they weren't on their boat but we left it for them anyway along with a few DVDs to watch and pass on.  Boaters are all very good at sharing stuff out... it comes from not having the space to hoard - books get read, dvds watched and then passed on to others who do the same... it's a nice way of life.

We still need to find homes for lots of things currently wedged in our cars but with luck that'll all be done by mid-week and our plan is to take the boat on a jaunt to Huddersfield this coming weekend... subject to river levels allowing !

BEFORE Then however, I need to fill up the stern greaser which is just about out ... AND remember to use it more often as after the other nights cruise, we had a couple of pints of water in the bilge -which wasn't deep enough for the bilge pump to extricate and necessitated in a load of nappies being used.. .they are VERY effective and cheap as chips too. 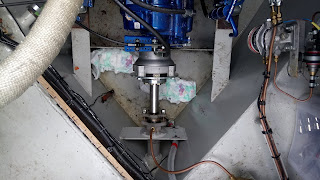 I'm going to put a container under the gland with a  nappy already in to save this happening again.

A rolled up newspaper works for sucking up the water. You can find then in the recycling bins would save buying nappies!