After a surprisingly peaceful night on our "Hobson's Choice" lovely mooring, as we set off back, the sun was out and it promised to be a pleasant enough day...  You can see the security fencing behind - it turned out that the whole area was floodlit to almost daylight and despite our initial concerns about nefarious activities  AND a few nosey groups staggering down the tow-path, there'd been no trouble - in fact, on pulling pins, we discovered a ginger idiot the Captain had left a mooring pin and club hammer ON the tow path ... which hadn't been used against us ! 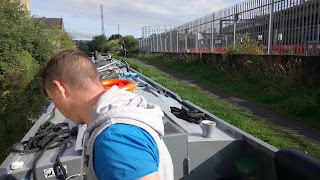 As we chugged along, we spotted this lovely bit of graffiti art - 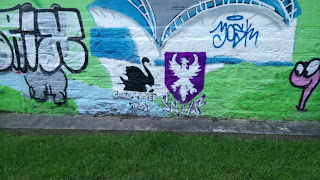 Safe decent of the locks did mean going down diagonally - Andy watching the front until the T stud had gotten under the (cut off) walk-ways whilst I giggled back and forth - sometimes over the cill as the water level fell ... not a the leisurely stress-free decent we'd hoped for. 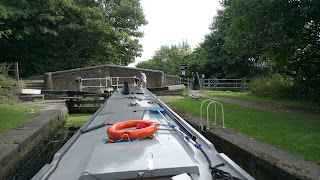 On the plus side (and their usually is one if you look hard enough) we did see this little fellow leaping around on the lock side - I'm embarrassed to say I don't know what it is... we WANT it to be some kind of Otter but if you know better, please elucidate. 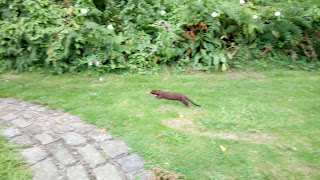 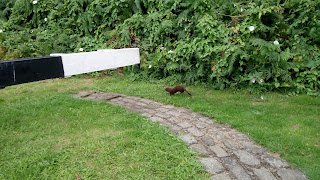 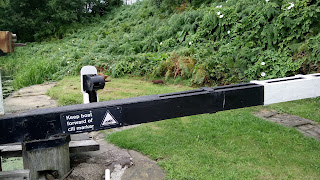 Still, we got in a routine and it went well enough - well until we got to the pound between locks 4 and 5.  Andy was on bike duty again and despite us having walkie-talkies on the boat, he'd not taken one with him and since him falling in, neither was his phone working...  it wasn't until he'd cycled off that I notice the water level was rather low....  and it hadn't been deep to start with! 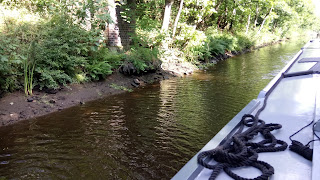 Looking at the tow-path side, it must have been down about 18 inches.  Inevitably, Ellis ground to a halt and it took me quite a bit of faffing around to re-float and get moving again...  and of course with the crew  laying on a balance beam sun-bathing no where in sight, I admit to getting  a bit of a grump on ....RESISTING the urge to grab a windlass and leap off into the mud to go run some water down from the pound above, I persevered and eventually got to the lock landing - where said crew member (now demoted) was dozing in the sun oblivious to the time it took me.

No harm done but I was in a bit of a sulk.

I phoned CRT to inform them and got the usual message about water levels being low/high not counting as an emergency and in future I should use the "contact us form" on the website ffs... hey ho.
Still, someone had at least made an effective repair on this locking thingy ;-) 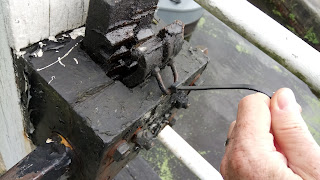 By the time we reached the bottom lock, back onto the river, it became apparent where all the leaking water had ended up 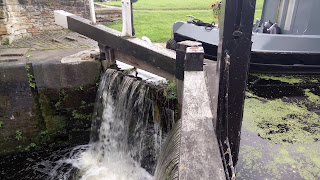 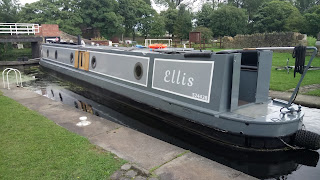 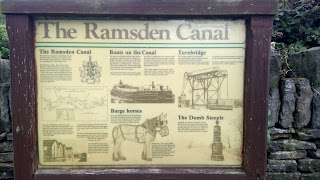 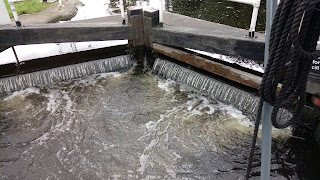 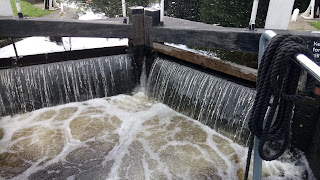 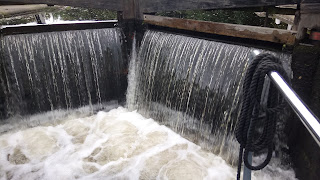 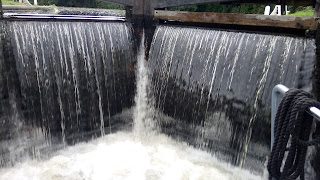 It took forever to get the bottom gate open and back on the river at Cooper Bridge.  Once back on the canal (breifly) we met our first traffic in a couple of days 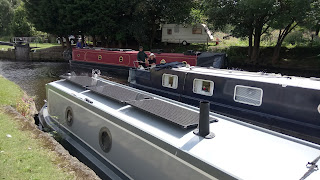 One boat was heading to Sowerby Bridge - the other where we had just been... we warned them about the levels and I think she was going to phone crt to check someone had been to top up the offending pound.

As we approached SP boat club, I took another snap of their lovely covered and curtained dry dock - We'll phone them this week to enquire if "non-members" are welcome to hire it and might black the boat before winter arrives... 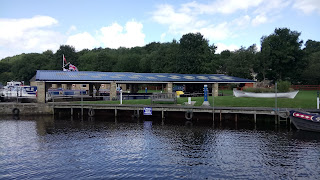 As we left down the lock, a group of charity walkers we'd seen a few times through the morning caught up with us... they'd been to the pub and were quite chatty this time around... this chap said "I feel quite comfortable in the dress but the wig is itchy" ... 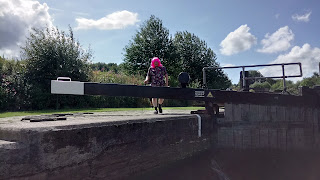 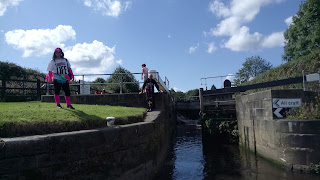 Once back in Mirfield, we met up with the "Safe Anchor" trip boats (several of them) as apparently Shepley Bridge Marina was having an open day with free boat trips...http://www.safeanchor.org.uk 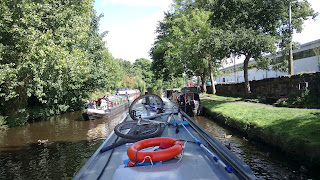 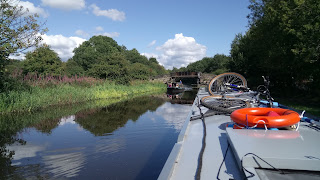 We moored for the night back in Shepley bridge again - this time on the visitor moorings near the "bridge that goes to nowhere"  and given the amount of traffic from the trip boats, decided to have a go at a spring variation 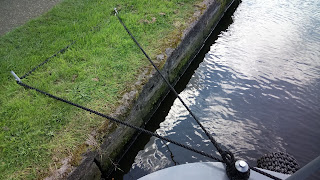 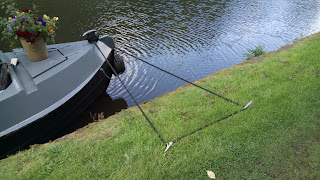 which seemed to work quite well.
Having a wander down to the services block - (boat access being difficult due to some poor mooring of old boats at either side, meaning a 57footer can't get in) to take some rubbish, I noticed they too have a dry dock - although not as galmerous as South Penine boat clubs, it might be usuable,... certainly in preference to being "pulled out" by a tractor on a ramp. 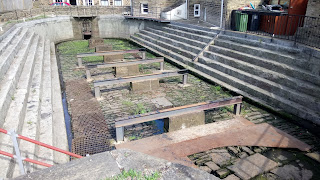 When the trip boats ceased for the day, it was just the occasional dog walker passing by and a peaceful evening as the sun went down. 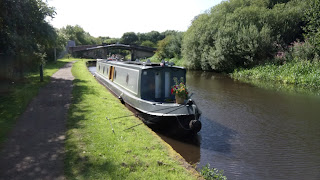 Difficult from the photo, but my guess would be mink.
Rog
nb Paneke

I reckon it's either a weasel or a stoat, now you can always tell a weasel from a stoat because,,,wait for it,
A stoat is stoataly different !!! 😀😀
Too big for either so my guess is a mink too.

that's what we've concluded now... although his brown fur didn't look very luxurious to me - I'll stick with gortex thank you very much

*groans*... I've a friend who tells jokes like that... well actually he only tells ONE joke - NOT sure if will work on screen but here goes:
Knock Knock