After a pleasant evening here in Shepley Bridge we got up early (ish) and headed off towards Huddersfield as planned...  The couple we were travelling with yesterday were (or so we thought at the time) heading up to Sowerby Bridge so we didn't feel too bad sneaking past them  quietly passing their boat as they slept.  Once we'd moored up for the night, they passed us having had a change of mind... oops. It was a good job though as we'd NEVER have gotten into the locks WITH them anyway. 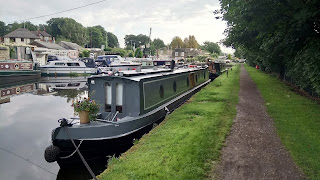 A lovely mild and calm morning - not a breath of wind and the first time we've been through Mirfield on a boat. 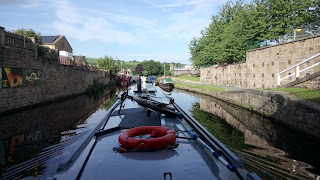 It's only a brief spell of canal before you're back on the river again... and (as is becoming the norm by the looks of things) RIGHT on a weir...  at least the ones at home are "out of site" - here, you see what COULD happen! 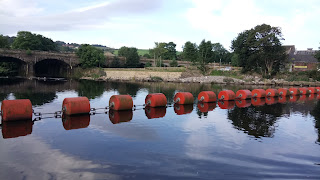 The river is quite wide though and the flow gentle enough...  The signposts are quite overgrown so you do have to keep an eye open. 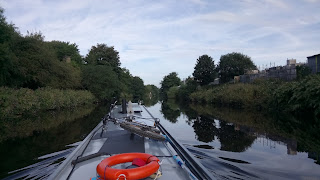 As we entered the lock at South Pennine Boating Club we were pleased at being able to get in and shut the gates normally...  THAT wasn't to last!  They DO have a lovely covered dry dock with curtain sides though which might be handy when we get around blacking.

Before long we were back on the river again and also back to SHORT locks...  not much wiggle space at all but at least the CRT men who were painting a gate each, DID open them for us so I didn't need to drop Andy off . IT would have been nice if they'd worked it too but they must have had a schedule to stick to ... no matter -  we were not in a rush so didn't bother digging out the hand spike and just used the windlass. 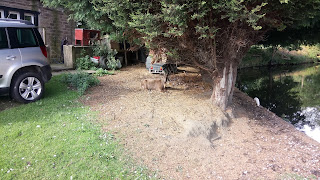 This lock had it's own "Guard Goat" - although I suspect she wasn't much use given all the geese (goose?) poo around!

After a brief (but pleasant enough) stretch of canal, we had to chuck a VERY tight left turn on the Calder towards Huffersfield - going right was the way Sowerby Bridge 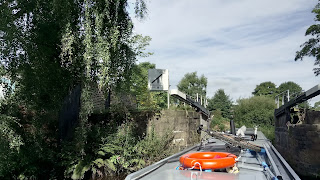 and a couple of hundred yards ahead, another weir AND the start of the Huddersfield Broad canal. 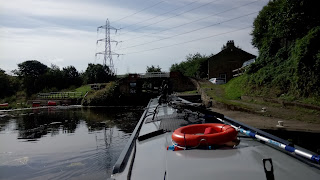 A quite picturesque beginning to it and plenty of water flowing over the top of the gate led us to assume there would be plenty further ahead too... 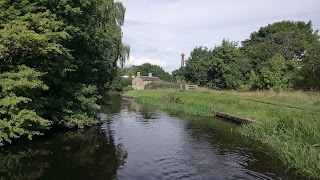 We were both in a really good mood as the sun was still shining and the scenery perfectly pleasant - the  LOCKS however were not so user friendly.... we REALLY are going to have to measure the boat as each one was a complete pig to get into AND close the gates behind...  necessitating diagonally wiggling the boat.  NOT helped by the fact quite often both gates don't open fully.

On the plus side, although locked (after the first couple) at least the locks are an improvement of the ones on the Leeds Liverpool 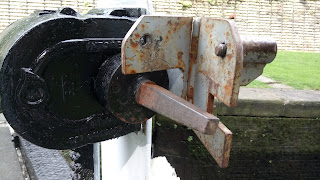 It was after the first "locked" lock, that Andy decided he'd cycle ahead and get each lock ready. 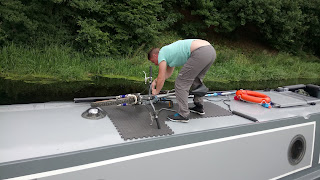 This was to be his first ride on the recently donated bike (from Eric - 87 next door)... (he'd not ridden one for 50 years and bought it with a view to cycling to Edna's grave)...  poor fella only got to the end of his drive and promptly fell off - twice!

Before long, we'd arrive in the town basin - passing through our first lift bridge 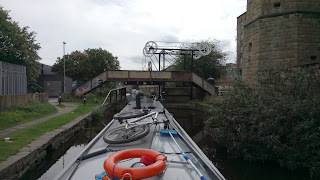 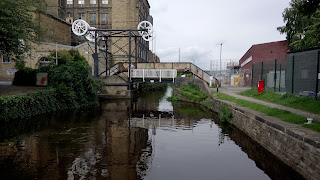 It all got a bit congested so we thought we'd turn in the basin and try and get in at the end of the "72 hour visitor moorings" - where a sign said payment required for longer stays...  by the looks of the boats, many hadn't moved in 72 days never mind 72 hours!!! 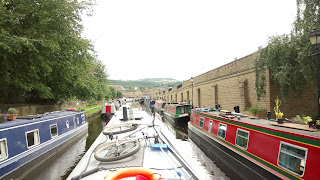 Of course when we got into the basin,  at the turny point near the services block, the wind had gotten up and after a fluke-illy good proficient 87 point turn- WITHOUT hitting Vixen, we took advantage of the water-point (whilst I took some deep breaths)...  note to self *this water point is ferorcous *... with wet feet, we set off back to try and moor for the night at the end of the line of boats... 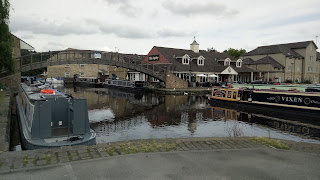 After MANY failed attempts at reaching the bank (the ledge was just too wide for us to be able to get on and off ... and ahem, I've YET to make us a gangplank *adds to the list*) we gave in, lifted the bridge and moored a little past the landing... in what looked like the bad-lands.

You'll be pleased to note we made it though the night un-scathed and set off back towards Wakefield the following morning!

You are bring back memories... Thanks!

Hopefully good ones - although I'd imagine you had JUST the same struggle as us ... with a better paint job of course ;-)