Time keeps getting the better of me these days - it's hard to keep up with admin tasks such as tweets,Facebook blogging and boating forums... ESPECIALLY when the weather is good - as it has been for what feels like forever.

ANYWAY, as some of you'll remember, our most recent guest was From New Zealand - a lovely lady who we nicknamed "nana" - she took it well...  in fact, she sent a text message to say she'd safely arrived back at her son's in London and signed off "Granny Kathy".

Before she left however, she presented us with this tatt delightful gift - some kiwi wine glass identifiers... they'll come in handy when Sally's around lol 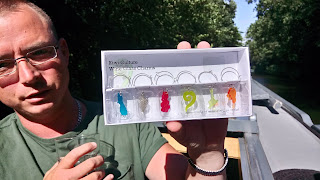 btw - the term "tatt" was hers not ours... we're quite touched she'd brought them all the way with her!

So then, on my last update, we'd been moored in Skipton for a couple of days so Kathy could explore the Town/Castle and for us all too go out for dinner.  On leaving Skipton, we first had to fill with water and have a pump out - on this occasion, we used Pennine cruisers - it still worked out cheaper than the CRT self pump out cards and I'm beginning to wonder why we've not been using boat yards all along!

Btw - Pennine are a really helpful lot - the boss man (Ian I think he's called) is an old school grafter  - only last Sunday, we came across him removing a broken window from one of his hire boats that had been carelessly smashed by the hirers on a swing bridge - quite nicely natured about it when I'd have been bollocking admonishing them.

Once complete, we plodded on to East Riddelsen -planning a visit to the hall ... alas, the opening times didn't work so after a night there, our next stop was to be the outskirts of Saltaire once we'd gone down Bingley 5 and 3.  The locks there are getting leakier each time we pass through - sharing with Memory Maker (60 ft) meant that poor Eddie got quite wet when backing up to the cill in order to get the gates open... I've never been so please at being 3 foot shorter! 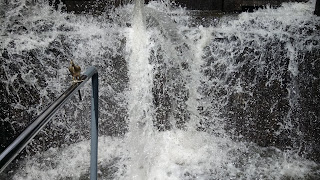 Suffice to say, he had a number of showers that day!

No matter, he'd dried out by the time we got to the outskirts of Saltaire (above the lock) where we tied up for a peaceful night.

With Kathy's next day departure in mind, we moved down the lock and spent our last night together opposite the church... a place which whilst nice, doesn't get any easier to "fit" in thanks to all the rocks at the waters edge.  After MUCH broddling around with our measuring stick *read boat hook with a bit of tape on it* we found a bit and tied up... under trees so the boat was cool but the solar panels couldn't do a lot - it was only for one night so we weren't too bothered about that... 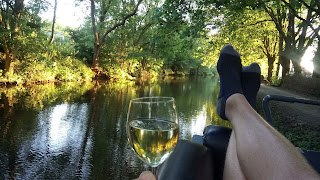 side of boat - upon investigation, I found a fledgling Jay, struggling around in the cut ... bad timing for the poor thing as he/she ended up amongst a family of geese that didn't take well to the intrusion...
I rescued it with the fishing net that lives on the roof (thanks mum and dad) and put it in the bushes away from the path... hoping "mum" would come and find it....  about 3 minutes later there was a nother clonk - this time on the roof of the boat and this little fella/fella-ess had appeared... 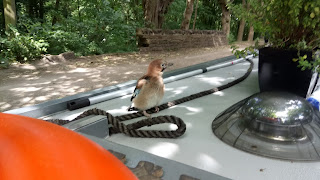 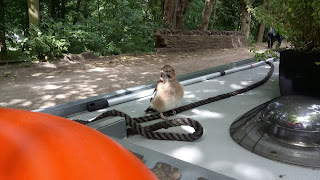 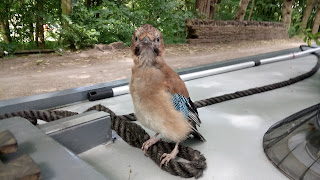 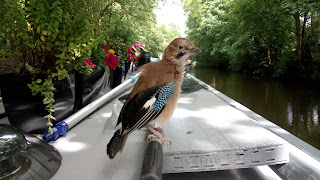 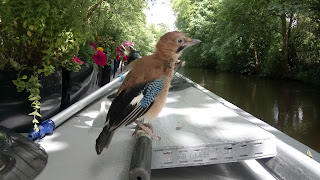 AND of course no matter how gently I tried to encourage it to flutter off towpath side,  it too, dived into the canal and needed rescuing...  There was going to be limited sleep that night I could tell - I had no idea HOW many more there were in the tree hopping around ready to dive bomb the boat.

Having fished it from the water, I picked it up and took it to it's sibling - during the lift it cried holy hell and a parent dived down at me... still, at least now the parent knew where they were and before long were bringing them food.

I had a restless nights sleep - imaging even knock, clonk, groan and splash was another bird in danger... which of course resulted in me nipping out of the boat several times to check.  AS predicted, about 6.30 I became aware of splashing and banging between the boat and the canal and and another one (I suppose it could have been one of the previously rescued ones having another dip) needed fishing out.

Anyway - we set off and chugged on to Shipley to drop Kathy off at the station to catch her train to London.

Not long after she'd gone did I get a phone call from CRT to say that our booking to go into Liverpool for a week in July was going to have to be cancelled - the breach at Melling being the cause... the repair likely to take longer than 6 weeks... I won't lie, I'm bit irked by this... it's a hole...  a man in a digger and a big pile of clay could fix it in a couple of days max - especially given originally it'd have been a navvie and a wheelbarrow.

Still, at least CRT gave us over a months notice.  We're going to have to change our plans now.  Hey ho.