Who stole the water?

Well, sitting on the towpath sunbathing whilst umpteen thousand women dressing in pink go shuffling Running passed is not as relaxing as you'd hope...To give them credit, they were all in good spirits, managed to avoid our chairs, whirlie gig and dog bowls AND more importantly they were raising money - fair play to them. 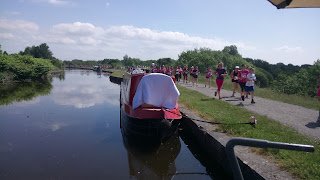 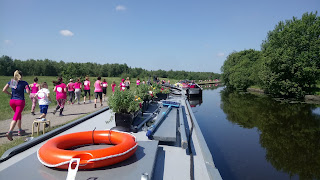 Once normality had returned, we took a walk right around the flash - in the midday sun.  Of course I hadn't received the memo that we were going ALL the way around and into Morrisons on the other side before setting of - ergo, I'd not put any sun cream on... suffice to say on return (some 6 miles later carry shopping!) I was a little bit pinker than is good for a ginger person.

We'd arranged with the boat behind to share the Wigan flight on Tuesday, (incidentally that was my birthday and I'm pleased to say that FINALLY it was one with no cards) so we agreed to leave our moorings Monday afternoon, fill with water at Plank lane bridge and then get as close to the bottom lock on the Leigh branch to ensure we'd get to the bottom of Wigan by 8am when they unlock the gates.

The water point at Plank lane lift bridge is RIGHT on the 24 hour visitor moorings!!! bonkers.  It's OK though as we've 3 long hoses so were able to get attached - right after a woman moored on there did a very good bit of reversing off and turned into the marina. 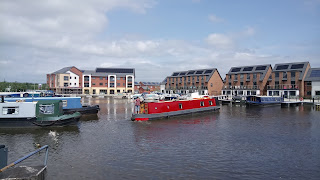 Once full, we chugged on as far as Scottsmans flash (I think) and tied up for what we'd hoped would be a quiet night... 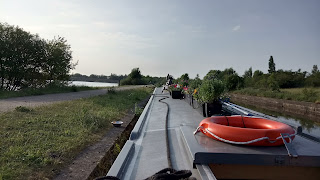 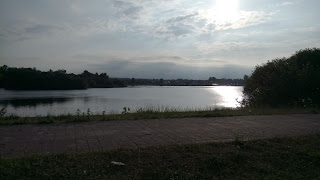 Alas, a short while later, a large group of neanderthals young people having fun, decided to begin jumping into the water ahead of us... which in itself wasn't a problem until one of them came asking for a light for "his dad's cigarette" - Andy is not very good at keeping the peace in that type of situation...  and made an enemy - admittedly he was pre-pubescent but he walked and talked like someone with gonads bigger than Andy's former poorly one (which btw, is now resolved)...

We decided that rather than sit on the towpath and aggravate things, we'd watch a film and leave them to it.   I must admit, that when we came out early doors to set off the following morning, I was amazed to still have ropes/pins lol.

ANYWAY - Tuesday morning, off we set, having read on the CRT notices that lock 1 is LOCKED to save water until 8 and aware we'd still have to get to the bottom of the Wigan flight as soon before 9 as possible in order to get in.

AS we chugged in to the chamber at lock 2, I could see Andy ahead gesticulating we had a problem...

Upon inspection, we came across this: 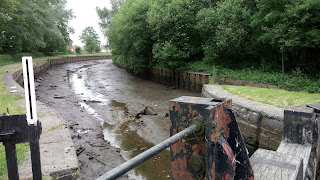 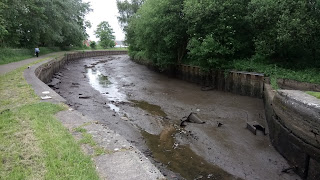 Some bugger had nicked all the water in the pound above.  Andy went on ahead to see if there was a CRT chap at lock 1 about to "unlock it" and then refil, whilst I phoned the CRT emergency number... which btw, makes it clear they don't want to hear from you unless life or property is in danger... pondering whether wanting to kill someone would count, I STAYED on the line and spoke with a chap who promised to get back to me once he had someone on the way.  To give him credit, a few minutes later he DID call call back and said a chap was coming to help balance the levels.

By the time he'd arrived we'd got enough water in pound to gingerly chug up the middle and into lock 1 - it was my old friend (the chap I had an altercation with a month back at the broken, battery powered swing bridge)... he WAS pleased to see me I could tell.  ANYWAY - we entered the Wigan flight as the 2nd pair of boats at 8.50 and exited 13.10.... not bad timing given we din't rush.  We did have some help along the way too by the lockie and members of the facebook flight crew.  If any or you read this drivvle, THANK YOU... your help is much appreciated.

We HAD planned to spend a few nights at the top but upon arrival there were already too many boats around - and more importantly, too many boats around the bit you can get in without being stuck on the shelf ... ergo, we chugged on for a while to just outside Adlington where we'll use as  base to get the car back from Appley Bridge and take back to Wakefield before the weekend when our next guests arrive. 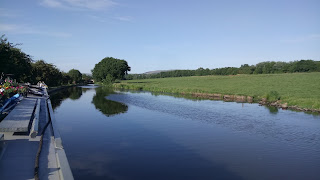 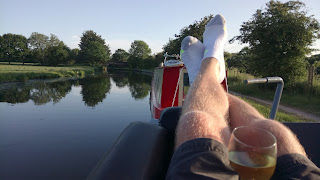 We've tied up in quite a nice place with nothing obstructing the solar panels and only a short walk into town.

Fabulous, you do make me chuckle! Paula