The trouble with liking somewhere is that you can linger a little too long sometimes - on THIS occasion, we sat out the bank holiday to avoid the hoards speeding around and explored the local area a bit more.

I can't recall HOW we found out about it ... probably from chatting with another boater, but apparently there is a circular walk that would take in a place called "Fairy Glen" - off we set, following trusty Google maps on our phones. 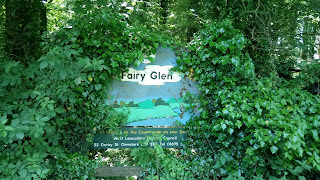 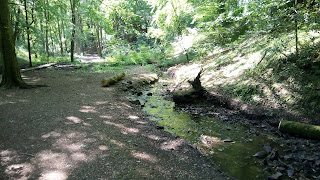 It's actually quite a nice little woodland... obviously special to the locals as the floor was scattered with 'Fairy Dust'...

The rumors of a spectacular waterfall however clearly had been exaggerated
. 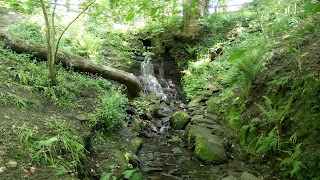 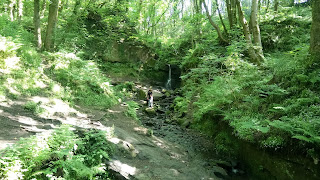 I'm sure if it rained for 40 days/nights it might look spectacular... but on a lovely sunny day after a dry spell, 'nice' just about covered it.

On route back to the boat we also spotted a terrapin sunbathing on a log by the canal... you'll have to squint to see it as I only had my phone with the digital zoom ...  it IS there, honest! 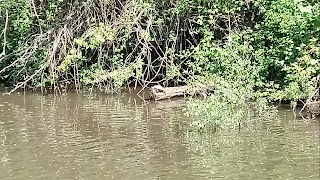 Back on the boat, a new plan was forming to deviate from our planned route (straight back to Wigan) and take a detour on the Leigh arm for a few days.  This turned out to be a good idea as the following morning when we set off, the sun was shining yet again.

On route back through Wigan, I noticed a very handily (not) located mooring bollard at a lock landing... 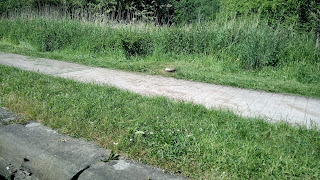 That could cause problems if someone actually used it...

Once through Wigan, we made the turn onto the Arm and set off on new waters again. 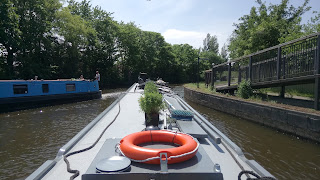 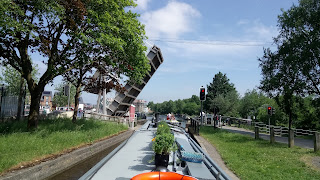 It has restricted hours of operation - ie, can't be used during the morning and evening rush hours... we'd timed it just right mid afteroon and before long, we'd moored up for the day overlooking Pennington Flash on the outskirts of Leigh. 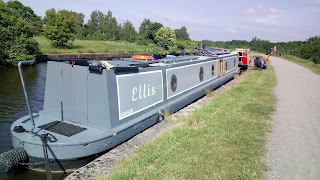 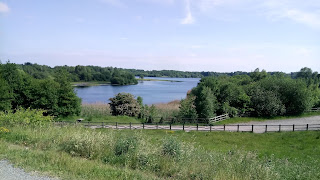 A bit later on, we walked along the towpath into Leigh for a nosy around... I even had a (long overdue) haircut.  Next morning, in need of water, we chugged on through Leigh and to where the Leeds & Liverpool joins the Bridgewater canal... 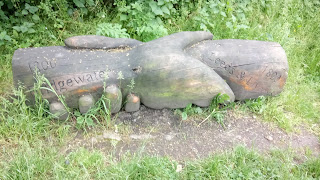 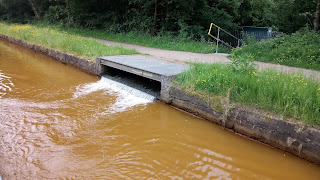 I can't recall exactly WHEN it happened but the water soon became "ginger" in colour ... a definite improvement of course ;-)

We chugged on in the sunshine for a while. 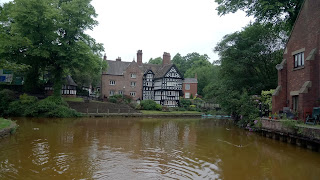 Once over the Barton aqueduct over the ship canal, there was just time to go passed the entrance to the Trafford centre before we turned and headed back to Boothstown for the night. 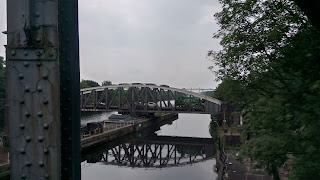 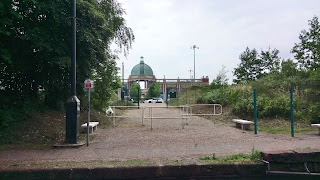 We've decided we quite like the place.  The marina there sells diesel at 74p  pumpouts are also good value...AND there's a Green King pub (newly refurbished) with reasonably priced meals and rings to moor right outside should you wish to... we opted for the towpath on the other side a little farther away from the rowdy potential of a busy summers evening.

Today, (Sunday) were back on Pennington Flash awaiting the arrival of the race for life runners planning to run down the towpath about 11am which we'll cheer on as they pass the boat.