Shipley to Castleford and back home...

Having left Shipley late afternoon, we plodded on towards Apperley Bridge and spent a pleasant evening opposite the marina.  On route, we came across a wide beam hire boat moored right on a bridge landing - with the bloke sat fishing and the lady having a cuppa...  I told him what a pillock he was for mooring in such a stupid place, suggested he might be better off moored 30 foot further down from the bollards and although I wasn't really listening, picked up something about a leaking bow thruster and awaiting an engineer.... we chugged off and left them to it.

When we tired up for the night in Apperley Bridge, the chap shortly pulled in opposite and returned the boat to hire base -  HAVING had a chat, I appologised for my directness and whilst he HAD still been moored like a twat  badly moored, as a hirer in a scary situation he could be forgiven... I even suggested he'd might be better off in future coming for a break on 'Ellis' with us lol

After a quiet night there, we set off bright and early for Leeds - intending to moor for a couple of nights in Granary Wharf... WHAT we didn't know (but subsequently found out from the lockie on the "Rough locks" was that there was a waterside festival taking place IN the wharf and no mooring...  ADD to that the chaos of canoes everywhere AND quite a strong wind, it made passage through and on to the river quite challenging.... ALL of course with 1000's of eyes watching us. 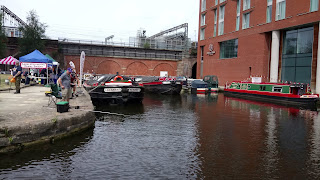 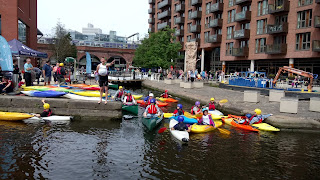 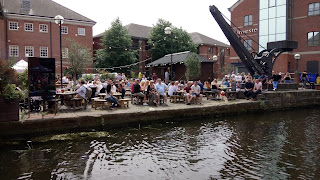 Luckily, a chap who was to cast off and had arranged with the CRT staff on duty for the to set the lock for him, shouted over that Eddie and I could have it and he'd follow on later....

It was still hard for our crew to fight their way through the crowds and leap back on to the boats but we made it and continued our journey downstream.   We tied up for the night in Woodlesford and took a walk to the local Lidl to restock the larder....  The heat being unbearable.

We'd not intended spending more than one night there until someone remembered the footie was on so we delayed our departure 24 hours and then headed off to Castleford .  We found shade in the visitor moorings (good for the temperature but not so good for the solar panels)... ALSO not so good for the ears as it appears the chap on the green wide beam there STILL runs his generator until 11-11.30 each night... well I say each night - we've only been there twice before but on each occasion he did the same.  I'm all for live and let live but it REALLY is anti-social.  I'll leave it for someone else to complain to CRT about him though as our solution was to move on the following morning.... a shame really as whilst NOT the most glamorous town, it is home to plenty of amenities.  Hey ho.

We're now back on our home moorings for a few days to catch up with chores, attend medical appointments and (hopefully) visit familly, before we begin our trip over the Rochdale to Manchester (and now back the same way thanks to that breach on the L & L.    Water levels ARE a bit of a concern now though as what with all the (lovely) driy weather AND the fires on Saddleworth moor, we've not idea if the canal will be deep enough or not.

We'll find out the hard way I suppose.