SO - ignoring my left foot for a moment, I'll update you on where we've been of late.

AS already said, we had a few days break and took the opportunity get a cab back to Appley Bridge to rescue the car we'd abandoned there the other week and take it back home - using the "open return" train tickets to get back to Wigan... WHAT a pa lava that was - Northern rail STILL experiencing delays, cancellations and resultant missed connections.  The journey back from Wakefield was a nightmare - Still, it's done now and the car is where it should be back at base.

Having bobbed around at Addlington for a few days in the sunshine, we had to return to Wigan Top lock to collect our next guests - our FIRST Aussies. Having filled with water, we spent a night on the 24 hour moorings right on the entrance to the lock. 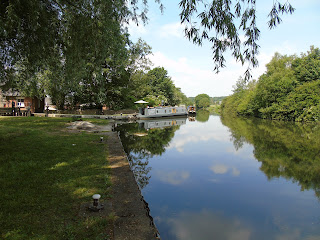 Not long after we got there, a boat pulled in where we had trouble the other day and I could see the chap having trying to pole it off.  Being a nosy so and so  all round good egg, I went over to see if I could help.  Whilst trying to push them off the shelf by rocking and leaning, the gap got ever wider until such time as I had no choice other than to "jump on board" to avoiding going in.  This left the chaps wife and I on his boat under our own steam.  She wasn't comfortable at steering so I took the tiller and executed a perfect turn and then reversed it into a mooring on the other side of the lock. 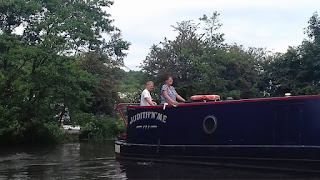 We got chatting as they tied up and as we had a few hours spare the following morning, I offered our help to work them as far down the flight as we could until about 10am.  They were very grateful and the following morning we did just that. - it just about killed me lol.

We managed to get them about 3/4 down by 10am when we decided it was time for us head back up to prepare for the Aussies... along with a nice bottle of wine as a "thank you" from the boaters.

Once loaded up with guests, we set off planning to get up Johnson's Hillocks before mooring for the day.  The original plan was to catch up with Eddie and Wendy on their boat (Memory Maker) and we'd work up the locks together... somewhere along the line a certain ginger idiot I'd got muddled and thought they'd already gone up the locks.. SO, when asked by a single hander if we'd share the locks I'd agreed - much to the annoyance of Wendy...  it all worked out in the end as our crew went back and helped Eddie up anyway... however, because I was jumping on and off the boat quite a lot to close gates and padddles whilst Andy went back and forth setting the locks, I slipped on one occasion - dunking my left foot into the water and banging both it and my right knee on the boat - I hoped no one had seen but of course there were a group of gongooozlers that clocked me - oh well... I STILL don't count it as falling in because I only got wet up my knee!

By the time we'd moored at the top (we had to double breast as there was only one space available) we decided we all go out for tea - alas the pub there had other ideas and had stopped serving at 7pm.... WHAT is it with pubs over here having rubbish serving hours. 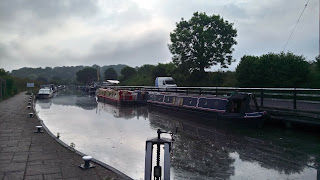 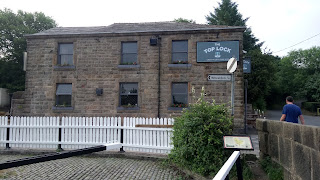 Next day, we chugged on, stopping for a look around Withnell Fold 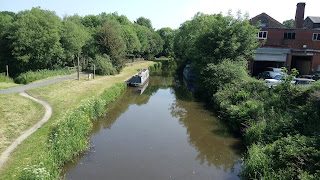 It turned out to be quite an attractive gathering of houses - built for workers in the paper mill on the canal side.  Not a lot to it but a pleasant walk along with old set of "stocks" and a Methodist church. 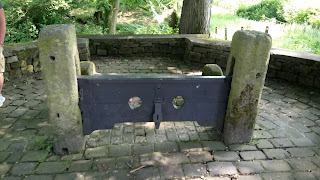 Chugging on, we ended the day around Norden  as far away as we could get from the motoroways... not the widest of tow paths but enough to set up camp and chat to passers by. 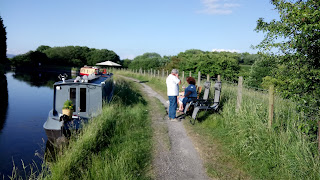 Marnie and Wayne (the Aussies) settling themselves into boating life VERY easily...  especially the alcoholic "convivial side"...

Next day, we headed off towards Burnley and spent another night doubled up on the 24 hour moorings at Rose Grove - we'd stayed there on the way out and noted 2 boats STILL there... taking the proverbial out of CRT... Thing is, they have an office and depot yard there yet STILL don't do anything about it... Continuous mooring IS a problem and needs to be tackled.  It's a debate I won't get into  here - suffice to say, there ARE guidelines and if they were enforced, it would be a lot fairer for everyone.

After a quiet night at the services, we filled up with water, did some washing and I nipped to the post office to see if they'd kept the countersunk screws I'd had delivered via the Post Restante service at the beginning of May - I expected them to have binned them by now but no, the lady smiled and handed the envelope to me as soon as I went in.  That's a good (free) service.

Setting off the rudder was feeling a bit wobbly so I pulled in before the Gannow Tunnel and went down the weed hatch - to be fair that's only the 2nd time since we GOT the boat...  as predicted however, this lot was well and truly clogging the prop/rudder.. 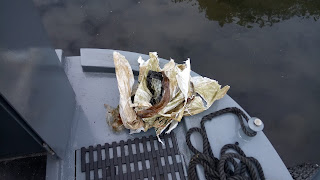 On route to our current mooring, we stopped off briefly at the only canal-side "oil disposal point" we've seen so far to empty the oil containers from my last service. 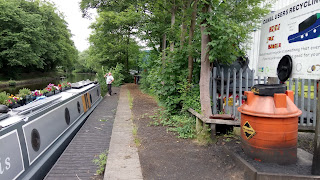 The final night with the Aussies was spent eating, drinking AND of course playing the (now ubiquitous ) Rummikub - Marnie took  a while to get the hang of it... she has the same approach to it as I do - ie, I don't care if I lose.  Wendy and Eddie came after dinner so Andy palled up with Marnie and Eddie gave me a bit of help. 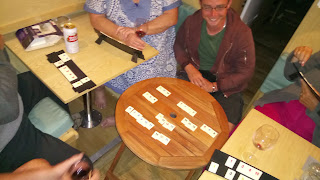 The Aussies left us this morning so today has been a day of laundry and cleaning the boat as tomorrow, we have a new guest - this time from New-Zealand.

Even though we've been busy, the boat does feel quiet and rather empty today - it appears I DO like people after all lol.