Chores and a change of plan... NOW we're going to Ripon...

ANOTHER wonderful thing about boating life (certainly at the moment as we've a lull in bookings over high summer) is that you can change your plans on a whim ... and we've done just that.

Rewind a little first though -  On Saturday morning, we took a drive up to visit my parents.  It was good to see how well my dad is recovering.  He's still very frail, and a shadow of his former self but he's managing quite well considering how close the grim-reaper came.  Mother on the other hand is having far greater mobility issues now and there is the risk of dad injuring himself if/when she falls.  That "red button" HAS to be the first port of call and I hope they have to sense to use it.

On return from there and  back on the home moorings - well actually on the visitor moorings further up the cut... (a bit farther/further? away from the racket a music festival was making over the hill), we set to and did a few chores. 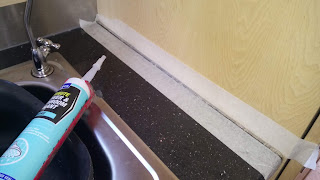 (by we I mean me... Andy went to Ikea with Wendy to buy things neither boat really needed lol)...

First job was to seal up the work top against the larder cupboard.  This failing only came to light a week or so ago when we were passing down the Bingley flight - it was a lovely sunny day so all the portholes were open on vent (actually - to be honest, they are open year round).... anyway, in one of the lock chambers I noticed a pisser  a stream of water pouring out between the blocks of stone during our decent... by the time I'd gotten inside the boat to close the port hole above the sink, it was too late - the result being a VERY wet floor and water had also trickled down into the dog biscuit cupboard....(yes I know we don't have a dog but we do have dog food onboard to give to passing pooches as treats).

Also, whilst moored in the relative shade on the other side, I rubbed down a few battle scars and slapped some paint on to make it match again. 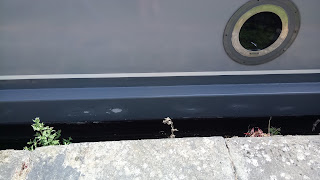 A couple of coats later and it was as good as new. much less noticeable.

Oh - btw, remember those fliers we had printed a while back? - we've been trying to give them out as we chug around but sometimes it's a bit intimidating for people when we pounce on them - likewise when we're sitting watching tv of an evening and someone comes to the window to read one that had been stuck to it - I don't know WHO gets the bigger shock when eyes meet over a sweltering ginger in his underpants!

SO - Eddie had the idea to get a magnetic panel made up ... and after  a bit of faffing around on the vista print site... and subsequent phone call to their help desk to get it done properly, they came up with these A4 (ish) sized copies of the A5 size leaflet that are flexible and magnetic... circa 40 quid I think.

Andy then got on to Ebay and found a leaflet holder which I've glue some magnets to AND made a little wooden bracket in case the magnets drop off - voila... Self service leaflets and info stuck to the boat as far away from where we're sitting - ergo, no difficult chats when our bellies are hanging out sunbathing lol. 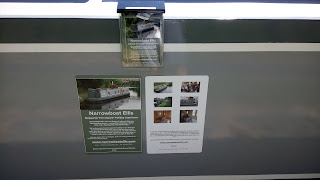 By the time I'd done these and a few other jobs, it was getting late - we'd all had a few glasses of wine and cooking tea didn't appeal to any of us... SO, we toddled off to the pub.

During either the walk or subsequent drinking session  libation, a plan to go to Ripon via the tidal Ouse etc, was hatched WHILST the weather forecast remained dry.  Given the original plan had been to go over the Rochdale to Manchester, what with the fires raging up there, that no longer held much appeal.  No guests had booked to come over with us and also given the Liverpool trip had already been cancelled by CRT we are going to seize the opportunity.  Very exciting for us all.

We're going to have to take care a bit further up though as a couple of locks show as only being 57' long and Memory Maker is a 60'footer.  Research has shown other boats that length have managed it - diagonally so we'll just have lock 'Ellis' through first, tie up and then go back and have a person on front/rear ropes diagonally.  We don't rush so we should be safe enough.

We loved it up at Ripon. We went in August 2014 on Lillian, she is 59ft 6. Linton Lock which we expected would be tight wasn't too bad, but nearer Ripon it was tighter. We went diagonally and decided it was a little bit too tight to come back down forwards, so reversed through the top two locks and we were fine. Watch out on the river locks as you can't always see your boat from the ground paddles. We somehow lost a porthole window, it fell out never to be seen again.
If you fancy a nice meal, visit The Dawney Arms in Linton, they have their own pontoon. An old friend of mine owns it.
Pip

Free as birds away to go, and heading north beckons I’ll be following enjoy your trip up there.
Cheers
Ade