Selby to York and a change of underpants...

You'll excuse the delay in the posting - It's been a hectic couple of days...

We moved into position in the basin about half nine on Wednesday morning once a couple of boats had chugged passed us.  We took the opportunity to top up the water tank and get rid of rubbish etc.  Having taken a look at the water flowing upstream, it didn't look too scary at all.  That all changed by the time the lockie shouted us to prepare for take off!

Anyways, we donned our life-jackets, made sure we had numbers for Selby and Naburn locks in our phones and had our walkie-talkies between us and the other boat.... HOW difficult could it be?

The lockie instructed us to creep out slowly aiming towards a tree in the distance and when we felt the front end being pulled, begin our turn and apply a bit of power...  I have no photos of the maneuver but it felt like the boat was going to tip over.  Once in the flow, we were amazed at how fast we were going up stream - barely on tick-over.  Cornering was interesting - it felt a bit like doing handbrake turns and it took a while to get my head around doing the opposite to what I'm used to on rivers - ie, rather than taking corners wide - trying to hug them tight whilst the tide pushes you back to deeper water...  we got the hang of it and the tide gradually began to peter out the further up stream we went - by the time we'd arrived at Naburn (the usual tidal limit) it was back to clear water and a normal river cruise.

Our friends seemed to enjoy it more than we did but I suppose for a first attempt on tidal waters it could have gone worse. 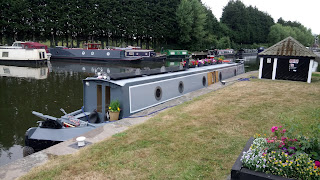 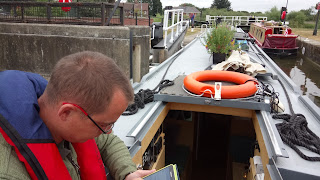 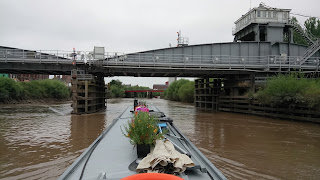 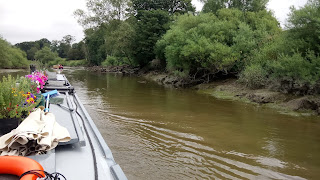 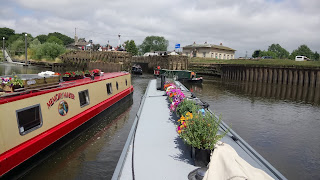 Once through Naburn lock we stopped for a quick lunchtime snack and then continued our journey up to York.

Compared to the previous 2 and a half hours, it was lovely up there...  nice buildings, lots of boats to look at and a relaxing cruise.  That was until our friends got a call saying they needed to return home as quickly as possible. 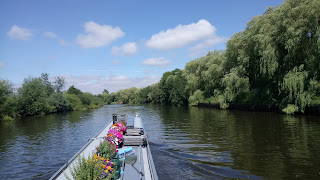 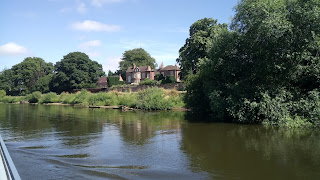 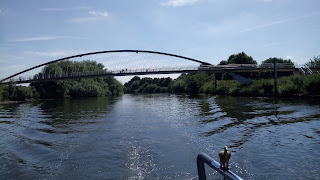 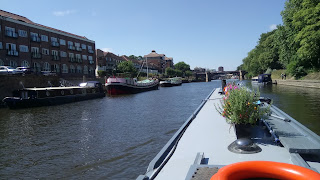 As we came into York, we spotted our friends boat that had (until March) been moored down at Stanley Ferry near us.  I gave Rachel a quick call to say we were passing and she nipped into the wheel house to give us a wave.

Later on, her other half  John, rowed up the river on his (hand crafted) wooden dingy and we sat in the evening sun catching up with a glass (or 8) of wine. 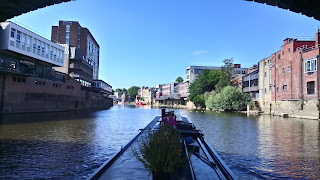 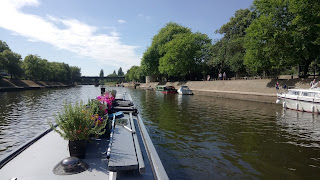 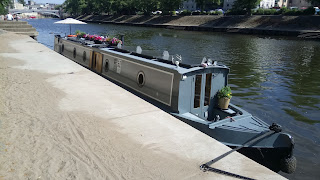 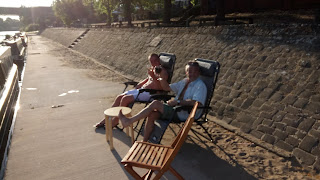 It was nice to see him and a shame she'd already made plans... hopefully, we'll catch up on Sunday when we head back from Ripon... MEANWHILE, our next leg of the journey is an 8 and half hours chugging up the Ouse (which becomes the Ure) and on to the Ripon Canal.