'Life' has a habit of messing plans up...  take the friends we're travelling around with at the moment... the ones in the 60 ft boat who were really looking forward to exploring up to Ripon.  Just as we arrived in York, they received a phone call which meant they had to get on a train and do family stuff.  I won't go into details as it's not my place but suffice to say, they gave us their boat keys and off they went.

Later, I got a text to say they didn't know how long they'd be away so we should go on to Ripon on our own to meet up with friends as planned.

Given how hot and sunny it's been (and looks likely to continue to be) we thought it prudent to take THEIR plants off their roof with us to keep them watered. 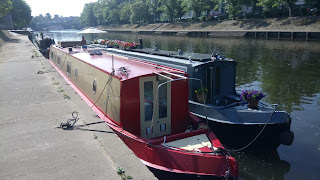 So off we set up river.

The early part of the journey was nice enough and we enjoyed the trip ... for a couple of hours up to Linten Lock... AFTER which it all got a bit samey...  endless chugging on the river with not a lot to see.  Saying that, there were lots of Kingfishers flying around but none giving us enough time to get a good photo. 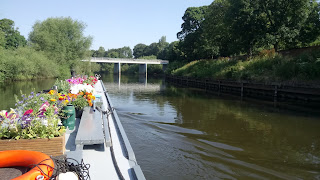 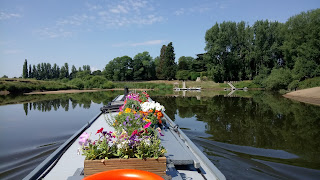 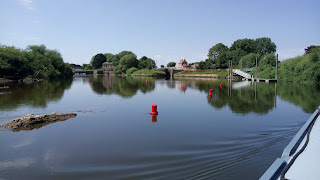 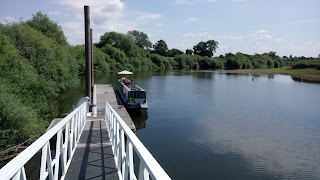 The locks up here all seem to taper - I don't know whether that's subsidence or the way they were built... I suspect it's the former - they'r not in a good state either way. 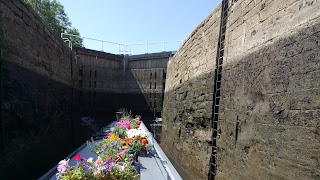 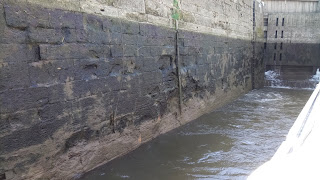 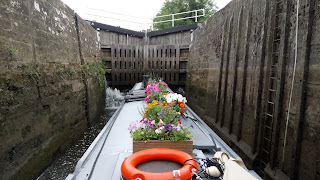 By Boroughbridge lock, we really were bored...we don't usually get bored chugging (on canals) but on the river, going up stream (with the additional engine noise required to make progress against the flow) it just gets monotonous.  Still, it was a means to an end and eventually (after about 7 hours chugging) we came to the end of the navigable Ure and made the turn on to the Ripon canal... 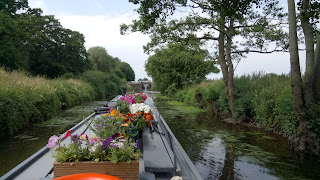 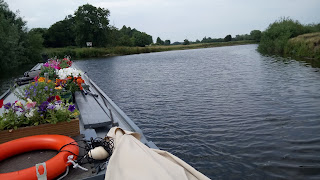 Our spirits lifted by finally  being off the river we dropped the revs right down and enjoyed the canal.

The Ripon Canal Society clearly take great pride in their canal... the locks and painted, grass cut and not  a scrap of litter in sight.  The water is crystal clear too... it's just a shame how badly the gates leak. 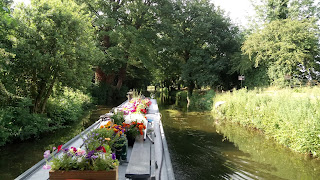 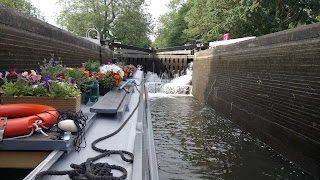 We went along to the basin before turning and tying up on the 48 hour moorings with another boat.  It's next to quite a noisy road but we soon made ourselves at home and my friend Helen appeared with her father for a quick visit. 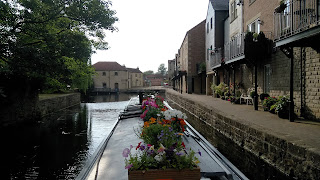 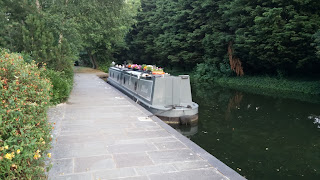 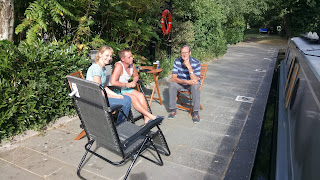 began driving - ergo, I know the town quite well already.

We ALSO had a visit from a couple we met on holiday in Cape Verde (maybe 6 years ago?) and it was lovely to catch up with them... they had a look at the boat and made kind noises about how fabulous it is and how clever I am to have done most of it lol... WHO could argue with them? 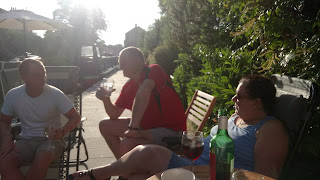 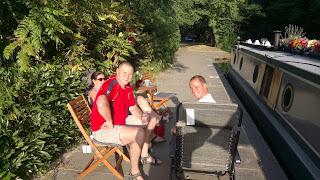 When they'd left, we moved the boat down to the service block to top up the water tank in preparation for an early departure the following morning for our (boring) journey back to York.

The facilitates in Ripon are however beautifully maintained and kept spotless... so much so, we both actually used the shower for a change (not that we don't shower - I mean used the shower block rather than boat shower)... 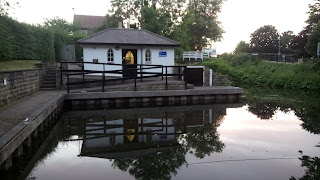 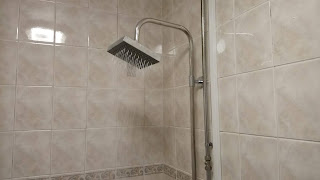 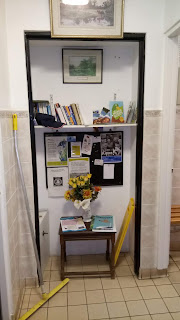 Next morning we began the return leg at about 7am... heading downstream, nothing spectacular to report.... we managed to knock an hour off and arrived back in York about half 2 (and had to breast along side our friends boat as the moorings were chockablock.

We DID toy with the idea of going to a pub to watch the football but it was just SO hot by then so we opened a bottle and dozed in the sun - the cheers from the pubs near the bridge, kept us informed of the score.... that and then about 200 or so random folk walking by later on singing "Football's coming home" lol.

A lovely atmosphere in the city though and later on John turned up again - THIS time with Rachel and we all sat chatting and drinking . 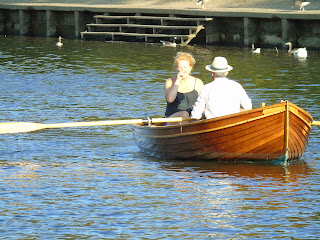 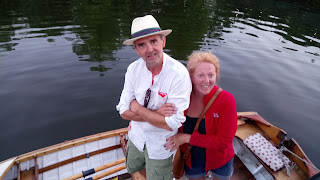 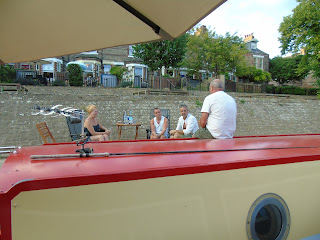 Before long, Eddie and Wendy returned from the Station and had a glass with us too.  A lovely end to a lovely day.  The plan is to spend tonight in York and then head to Naburn tomorrow in preparation for Tuesday mornings 6.30 am trip back to Selby on the tidal Ouse... we are NOT looking forward to making that turn - currently the plan is to turn upstream a few hundred yards before the lock and then hold the boat and then gradually drift backwards..... that might all change depending on how much pull the tide has.

You're considering exactly the same method for the move back onto the Selby as we were told to do. Do a 180deg turn immediately after the railway bridge and come back with the tide. Crab to the left into the slack water by the lock gates and then apply power doing a hard left turn. Remember to take the power off before reaching the end of the lock! :-) Only problem for us was the boat in front did the 180deg turn leaving us nowhere to turn until after the lock.